"This is a book of American roads, for men who travel on the bicycle."--KK

There’s still plenty of good riding to be done this fall, but as the leaves drop, I'm beginning to think ahead, to plan some over-winter projects, one of which is to finally read—and I mean, full-on, cover-to-cover read, read—Karl Kron’s 1887 eccentric cycling classic Ten Thousand Miles on a Bicycle (TTM). For those of you who aren’t familiar with this text, here’s the backgrounder.

“Karl Kron” (or KK, as I’ll occasionally call him) was the pen-name of one Lyman Hotchkiss Bagg (a name that sounds more made up than his pseudonym), born 1846, died 1911, a Yale graduate, author of the book Four Years at Yale (1871), and long-time librarian for the University Club of New York. KK caught the cycling bug in the early 1870s, and once he tried the high-wheel or “ordinary,” he was hooked. Between 1879 and 1884, he pedalled over 10,000 miles in the United States, Canada, and Bermuda, all the while keeping meticulous records of every single ride. It then took him three years to complete, or, some would say, compile, his massive book about those miles—and to rustle up three thousand subscribers who paid a dollar each in advance to help Kron self-publish his book. (The names of all 3000 are included in a special index; Kron addressed and signed each copy.) 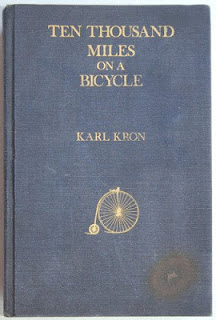 I’ve known about this odd book for years but only ever browsed it. The thought of reading the whole thing has seemed daunting. Part of what makes TTM so intimidating is its sheer volume: at over 800 pages (of small font with no illustrations other than the frontispiece below) it’s a doorstopper. But that only accounts for part of its mystique. TTM is also pretty unusual structurally, unlike any other cycle-travel book I’ve seen, possibly unique in the annals of cycling literature. True, some of its chapters are conventional “records of travels,” as Kron puts it, consisting of incredibly—some might say obsessively—detailed accounts ("My only wheeling in New Jersey, s. of Rahway, was on May 17, '84, when I went from Hoboken to Somerville (39 1/2 m., 9:30 A.M. to 7 P.M.") of his rides in places like the Jersey Hills, Niagara Falls, Boston, Nova Scotia, and Kentucky.

But then there are other long chapters that consist almost wholly of lists: of routes and records, road conditions and distances, names of club riders, inventories of cycling periodicals, the best hotels, and what he loosely calls “Statistics.” You see, Kron was a self-proclaimed “compiler,” a man who loved to gather and sort. He truly loved indexing.  At one time he worked as the indexer for the Yale Literary Review. TTM has over 50 pages of indexes (indices? sounds weird) and addenda which he places at the beginning of the book (General Index, Index of Places, Index of Persons, and so on), as if to show them off with prominence of place. 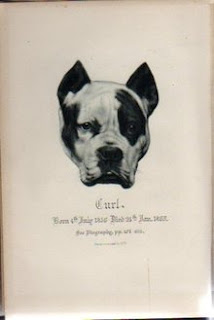 Then, strangest of all, Kron includes in the dead centre of the book two chapters that have nothing at all to do with cycling: one, about his beloved bulldog, Curl (“the best dog that ever lived”), and another, the longest chapter in the book, called “Castle Solitude in the Metropolis,” about, as far as I can tell, architecture and the building in NYC where KK lived. Whaa?

Put it all together and you’ve got one wonderfully weird book. It’s a real genre-bender: Kron himself refers to it as “a gazeteer, a dictionary, a cyclopaedia, a statistical guide, a thesaurus of facts[!]”. Might was well throw in manifesto, census, and autobiography, not to mention dogobiography.

I actually think of Kron’s TTM as cycling literature’s equivalent of James Joyce’s Ulysses—one of those notoriously difficult, occasionally frustrating, rule-breaker books that gets referred to a lot, that’s known to be a work of eccentric genius, but that most readers only ever dip their toes into. I suspect it’s rarely read cover to cover.

I remember when I first came across TTM while reading up on the Pennells’ cycle travels in the early 1880s. I recall flipping through the pages of TTM and thinking “Whoa! This is whack!” There’s a passion and strangeness and charm to it—imagine a cycle-travel book written by an autistic indexer who's obsessed with cycling. I also remember thinking this was something I should read some day.

Well, that day is here. But it’s not actually a day, it turns out. It’s a long, Alberta winter. I’m going to stretch out this reading experience. It took Kron five years to cycle all those miles. No biggie if it takes me five months to read about it.
Posted by Jasper Gates at 12:08 PM