My husband’s cycling gloves are disgusting. They’re dirty and snot-covered. Plus they kind of stink. But here’s the weird part. For some reason I can’t fathom, he refuses to wash them. What’s up with that?

I’m afraid your husband is absolutely right on this one. Under no circumstances should cycling gloves ever be laundered. Occasionally they may—and really should—be rinsed with rain water, perhaps while riding on a wet day, and then hung up to air dry. But that’s the extent of it. Whatever happens, one should never allow even a drop of laundry soap to sully the glovey fabric, lest the gloves be ruined. 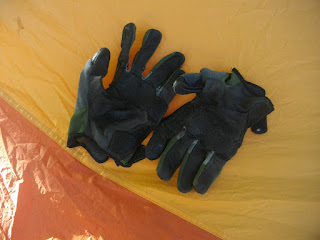 You may not realize it, BS, but cycling gloves are like old-school cast-iron skillets, which are seasoned for years with the natural oils produced in the cooking process. No conscientious cast-iron skillet owner would dare consider thrusting his pan into a soapy sink or, horror of horrors, inserting the skillet in a dishwasher. Such an act would undo years of hard work and render the pan forever compromised.

Same goes for cycling gloves (minus, of course, the cooking-on-them aspect). Over time, a cyclist’s gloves also become “seasoned,” if you will, by a unique combination of sweat, mucus, saliva, grime, rain water, and, from time to time, other bodily fluids. It is this organic elixir, this magical marinade of disgusting substances that provides cycling gloves with a host of well-documented benefits: a pleasing texture that can best be described as soft-crunchiness, a musky odor known to ward off predators, and a preservative effect (much like a cured mink oil that creates a water resistant seal) that can allow gloves to last for years, even decades.

Ideally, BS, a cycling glove should possess a slightly salty-sour tang and exhibit a moderate stiffness, almost able to stand up on its own. However, the glove owner must be patient. It can take years of unwashed wearing to get to this point. 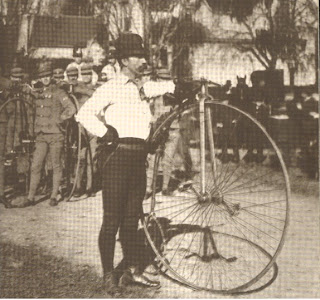 Some say the unwashed-cycling-glove tradition dates back to pioneering bicycle adventurer Thomas Stevens, who, legend has it, sported a pair of lamb-skin gloves on his round-the-world adventure in the 1880s, never once taking them off. Legend has it that one day, in a remote corner of Tibet, Stevens was accosted by a trio of surly yaks. The cyclist claimed that the strangely aggressive beasts only retreated when they got close enough to smell the glove on his outstretched hand. At that point, Stevens claims, the yaks immediately adopted a submissive posture, enabling the cyclist to proceed unscathed on his high mount. Ever since that day, many cycling purists have eschewed glove washing.

So, BS, as revolting as it may seem, your gloved one’s insistence on unwashed cycling gloves is to be respected, even applauded. Not only is this part of a grand tradition—those gloves might even save his life one day.