I recently returned from a family holiday at a cottage on lovely Moyie Lake in southeastern British Columbia. Of course, I brought a bike with me, my gravel grinder, thinking that I would explore some back roads while the kids were busy tubing, kneeboarding, and generally enjoying the pleasures of obnoxiously loud motor boating. The cycling turned out to be okay, but at the end of the week I was happy to head back home to good old central Alberta where, I have to say, the back road riding is markedly superior.


I sometimes imagine that British Columbian cyclists must look down their mountainous noses at us prairie-dwelling velocipedists. After all, they’ve got a surfeit of stunning scenery (endless mountains, vast forests, real lakes) and breathtaking roads that rise and twist and drop. Next door here in Alberta, we’ve got a less dramatic brand of scenery (mostly pancake flatlands, fields of grain, and swampy sloughs) and plumb-bob- straight roads laid out in orderly, if somewhat boring, grids. It would seem no contest when it comes to sussing out which region has the better road cycling. Surely BC is the bee’s knees, right?

On a mountain bike, no question. But if, like me, you’re looking specifically for back road cycling, far from the tumult of busy highways, and you don’t mind some genuine gravel grinding, then Alberta gets the nod in my book. Gravel roads in BC tend not to be set out in orderly anything. The mountainous terrain generally doesn’t allow for right angles. This does make for some wonderfully curvy roads, but these usually exist only as a means to get to something at the end: timber or metals or an RV farm on a lake. As a result, these back roads are often deadenders—sometimes long ones, but deadenders nonetheless.

Now I know I have in the past argued for the value ofexploring No Exit roads, but this is different. These ones have traffic, ugly timber-hauling or fifth-wheel traffic, that can make the riding an unpleasant and even treacherous endeavor. The prospect of a logging truck around the next bend tends to impede the kind of serene philosophical contemplation a No Exit road should rightly allow. 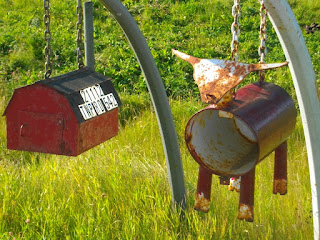 Clinging to the edge of a BC gravel road one day while a logging truck roared past in a cloud of dust, I began to realize how fortunate we are in Alberta. Just outside of Edmonton, in every direction, we have a grid of sleepy, mostly gravel lanes that offer a peaceful, virtually traffic-free network of rural roads which will take you almost anywhere you want to go. You barely need a map. True, these roads can’t boast the kind of dramatic splendour you find in the interior of BC, with its gaudy snow-capped peaks and tacky waterfalls. But in an understated prairie way, rural Alberta roads have their own charms—startlingly yellow canola fields, oceans of barley, dilapidated barns, and rustic mailbox art. Not much, you might say, but these small beauties have grown on me over the years.

Even the actual gravel in BC’s back roads is inferior. Where I was, around Cranbrook, the gravel was sharper, flintier, rockier, less forgiving than Alberta’s smoother, softer, friendlier surfaces. 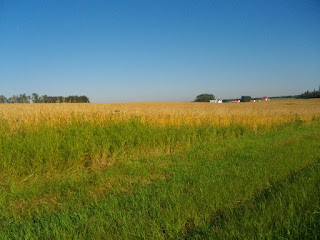 The day we drove back to Edmonton, I was having a nap in the back seat when we crossed the border back into Wild Rose Country. When I woke up and looked out the window, I saw the early evening sun lighting up gravel roads shooting east and west off of Highway 2, beckoning.  I felt a little flutter inside. It was good to be back in Alberta, where the roads are straight and true, and the gravel is like the politics—old-fashioned, safe, predictable, a bit dirty, but familiar. I thought of Corb Lund’s song: “This is my prairie, this is my home.”

As for that other Rural Alberta Advantage, the fine band, they seem to be on board with the whole cycling-Alberta’s-back roads business. Have a look and listen.