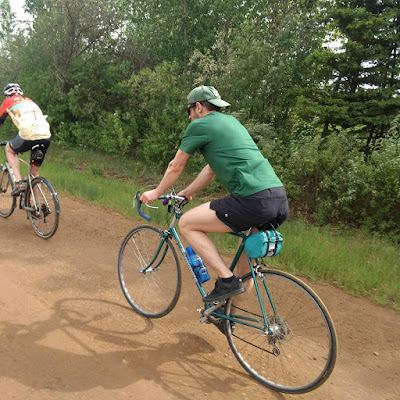 And while I do think that the threat of smoke probably scared some people off, for those hardy souls who ventured out to the Victoria Trail on Sunday, the conditions ended up being close to ideal. The smoke was gone; the temperature was a moderate 21 degrees; and the gravel was mostly excellent. (As usual, the long straight shot we call the Warspite Dead Zone was the shittiest part. The monotony of that straightaway was broken up only by soft piles of large stones that had been dumped at random spots in the middle of the road, which sent everyone scurrying for the grass line.) 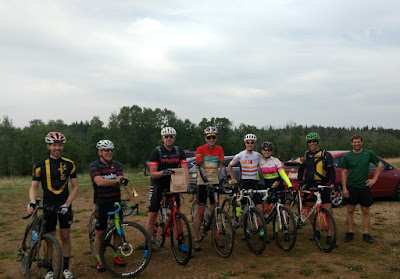 The number of riders was down a bit from last year (to be expected, given the conditions), but the riding was excellent. These superb conditions, perhaps combined with a sense of relief that the End Times were not quite yet upon us, resulted in a jovial mood and a brisk pace. In the post-Petro Can final 40 km, everyone was flying, buffeted on by a crisp tailwind. I didn’t see much in the way of people pausing to peruse plaques this year. Screw history; the tailwind was too good to stop.

As for notable sights and accomplishments, I have to mention that Tim Taylor-Smith saw (but did not wrestle) a bear; Tiffany Baker and Cheryl Voordenhout took by far the most selfies (and seemed to have had the most fun); Brad Fehr painted his bicycle red in honor of the Raptors’ playoff run; and Aaron Falkenberg is still really fast. Let’s call him Fast AF. 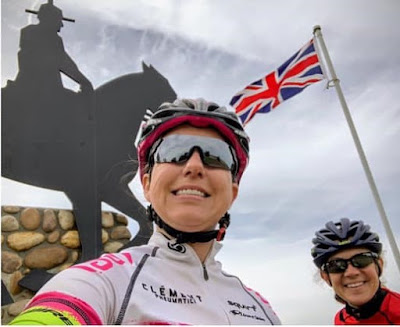 Val Garou became the second person to blow the sacred bugle when he officially launched the Li’l Dusty at 11 am.

Myron Borys invented a new category of gravel riding: the Gravel Birkebiker. He hauled around a large backpack containing, I think, a Norwegian baby-prince and 12 Radlers.

Rob Dunseith sent a shockwave through the Dusty community when he eschewed the bakery case at the Petro Can, opting instead for a pre-packaged chicken wrap. It was a radical break from tradition that will, no doubt, have people talking for weeks. 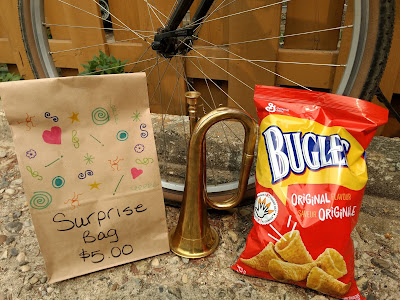 And the big prize of the day, the coveted Surprise Bag, courtesy of Popper’s store in Waskatenau, awarded to the day’s Dustiest Rider, went to second-time Dusty participant Paul Sopcak, who rolled out on his 1984 Kuwahara road bike and just busted ass on that old steel beast. It was an impressive feat of old-school grit. All he needed was a K-Way jacket and a fanny pack to complete the 80s look. 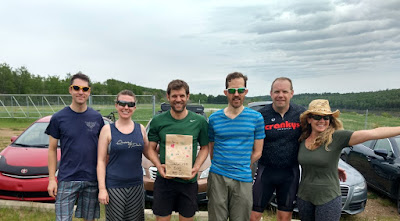 We dodged the apocalypse, at least for now, swapping out end times for good ones.

Email ThisBlogThis!Share to TwitterShare to FacebookShare to Pinterest
Labels: Dusty 100