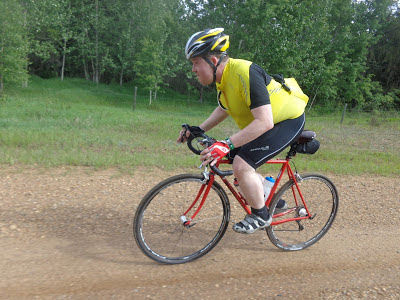 There are a lot of hard things in cycling. Hardmen race the classics, mountain bikers ride hardtails and are hardcore (or not), and roadies prefer hard tires. We go hard and then bonk hard, and in a velodrome, the shouts from coaches of “Hard! Hard! Hard!” are common. So, last year, when I read in the fine print that the Dusty 107 was also hard, I didn’t give it the thought or respect I should have. I stuck the widest tires I own--35c knobbly cyclocross tubs--on my steel road machine, packed a towel, and was off.

Feeling rear wheel slip while bombing down empty forest roads is an alien adrenaline to a roadie who hasn’t been on singletrack in years. But the adrenaline died after the second climb with my realization that narrow tires more sunk than rolled through the moist and loose gravel of Old Victoria Trail. And when I saw Val, Penn, Bigfoot Ryan, and Jasper steam ahead of me, riding over, rather than through, the matrix atop the road bed, my physical sinking quickly became existential too. Nevertheless, I told myself there were baked goods to be had at the halfway point, and I was committed to this. I had never logged a DNF and was not about to.

Jasper stuck with me for this first 40 km, a small mercy for the torture of watching his fatbike float easily over the gravel. This is where I gave up. I soon turned onto paved highway as Jasper rode off into the forest to catch up to his compatriots. Not long after, I was back at the start line, barely three hours into what should have been a day long engagement; still, this was more gravel than I had ever done.

Back at the car, I sat in the trunk and finished my bidon, facing my first DNF. Equipment may have had something to do with it, but I felt I had been crushed by crushed rock. On the drive back to the city I convinced myself that if I had really wanted to finish I could have, but the disappointment kept me from facing the hard reality for weeks.

The Dusty 100 is hard, but it’s hard like no other ride I’ve done. Living in Strathcona County where I am blessed with endless paved range roads, I was ignorant of the genuine challenge of riding on gravel over a long distance. When Jasper asked me to write about why I chose to ride again this year it seemed a silly question. I am stubborn and have business to finish. More than that, gravel is like no other riding experience, it blends the essential civilization of riding on a road with the demands of riding off of one; gravel forces you to be present, to be consistently aware of your line, and to push harder. Though I’m more fit and more attuned to the task, I’m also more prepared. I expect riding a fatbike 107 kilometres to be another kind of challenge.