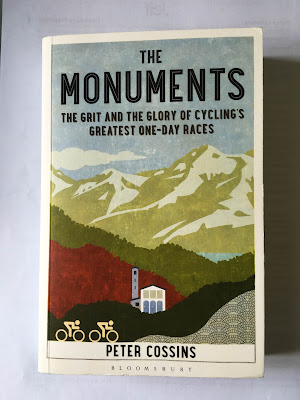 It’s spring classics season in professional cycling, the time of year when racers and fans turn their attention to those grueling and glorious one-day races in Belgium, The Netherlands, France, and Italy. The five oldest and most celebrated of these classics--Liege-Bastogne-Liege, Paris-Roubaix, Tour of Lombardy, Milan-San Remo, and the Tour of Flanders, all but the Italian race taking place in March and and April—have come to be known as “the monuments,” and winning one of these is, for most pros, an accomplishment second only to a Grand Tour victory.

The Monuments: The Grit and Glory of Cycling’s Greatest One-Day Races (Bloomsbury, 2014) by British cycling journalist Peter Cossins offers a useful, if somewhat two-dimensional, primer on the history and legacy of these big five races. If you are a casual fan of pro cycling and curious about the classics, Cossins’s book is a reasonable jumping off point for learning more.


The book features five sections, one for each race. Cossins gives us the origin story of each followed by a chronological survey of who won it and when. The book offers some sense of the unique spirit of each race, how the mythology of the Tour of Lombardy, for instance, the only autumn race of the five, has become so intertwined with the famous climb up the Ghisallo, complete with its religious connotations, that the chapel and cycling museum at the top has become a pilgrimage site for cyclists from all over the world. Or how the Tour of Flanders has become a Flemish nationalist institution, an event the scope of which long ago surpassed the realm of just sports.

Cossins throw in some good stories, from spectators throwing nails on the road in 1907 Tour of Lombardy to Bernard Hinault almost leaving frozen digits on a different road in the 1980 Liege-Bastogne-Liege. But I found much of the book to be tedious, overly listy, full of blow-by-blow race accounts and lists of winners. The straight chronological approach for each race results in a lot of repetition, and by the third of fourth section you can guess what’s coming: Coppi, Merckx, De Vlaeminck, Kelly, Belgian dude, Belgian dude, Belgian dude, Cancellara, another Belgian dude. It’s a problem with the structure of the book.

Really, there’s not a lot here that I couldn’t find on wikipedia. The book is told entirely in the third person in the style of straight, conventional, objective journalism. And there’s nothing wrong with that. But in my view, what this book could use is some subjective, first-person reporting on the ground at the actual races, providing an immediate sense of the unique culture, atmosphere, vibe behind each one, the people who cheer, the condition of the pave, the taste of the waffles and mud. I wish Cossins had ventured away from his computer and hit the cobblestone road. At the risk of belaboring a cycling cliché, I’d say the scope of Cossins’ project here is that of a domestique: capable, professional, but, ultimately, lacking in ambition.

Once I accepted the book for what it is, however, I found I could skim the listy bits and savor the occasional richer nuggets. One part I found particularly fascinating was the chapter on Paris-Roubaix that explores how the race route evolved in response to various pressures. In the early days, very few of the roads were paved, but that changed dramatically after World War 2, and by the 1960s, the route was becoming fast and easy (as any other road race, that is) and the so-called “Hell of the North” was in danger of losing its identity. Race organizers made the deliberate decision to seek out cobbled roads and embrace Paris-Roubaix’s fleeting reputation as a muddy, cobbled sufferfest. Of course, now this looks like a brilliant decision, but at the time it raised many eyebrows.

The timing may well be right for this book. The reputation of the monuments, Cossins suggests, is on the upswing after several decades of decline brought on by increasing specialization, which saw many elite Grand Tour riders skip the classics altogether in favor of focusing on the Tour de France. But now, just as in the golden age of the 1950 and 60s, many of the best Grand Tour riders are once again riding these races, attracted by the history, unpredictability, grit, and, yes, glory.
Posted by Jasper Gates at 7:11 PM