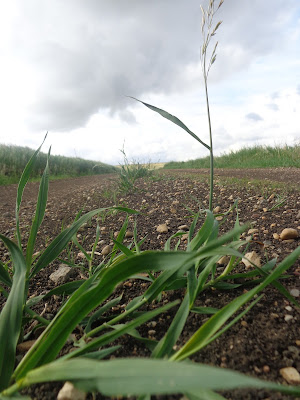 Our back road adventure took us over all manner of gravel, including several varieties I hadn't seen before. Like this one, on a range road southeast of Trochu. "Gravel" hardly seems the right word for this stuff on what is, essentially, a path through farmers' fields. (It really is an actual road, though, marked on the map, and with a road sign and everything--though a separate sign warns that the road is "unmaintained." In other words, you take your chances on such roads. How could we resist?) 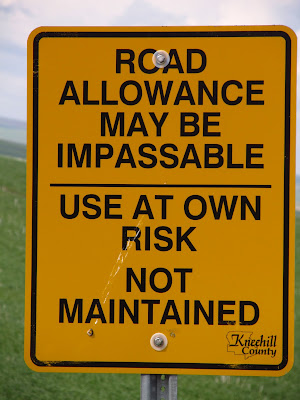 The surface was mostly dirt, dark dirt at that, more like soil; you've got to get good and close to see a few small pebbles mixed in. I imagine it would be a gumbo-fest if wet, but the day we rode through, the surface was dry, soft even. We did see some vehicle tire tracks in spots, but they looked rather ancient, fossilized, perhaps.

In places, however, the road lost much of its essential road-ness, with grass growing up in the middle of it, and, in some places, even crops from seed that had spread from adjacent fields. At one point, I found myself riding between rows of some kind of crop--barley, oats, whatever--and began to wonder if the road had sort of dissolved altogether. 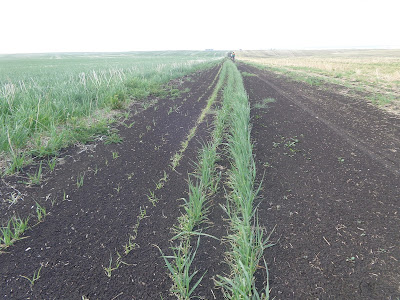 Riding this road was exhilarating, for a few reasons, I think. For one, it felt mildly adventurous, in that we were pushing the boundaries of what constitutes a road. (And, finding that is isn't difficult at all to ride on this stuff, a whole new world of possibilities begins to open up.) But even better was the realization, as we rolled along, that it was entirely possible--likely even--that until that very moment, in the history of universe, no-one had ever ridden a bicycle on this particular road.