My Backroads Alberta Map Book says that Dorothy, Alberta, is a ghost town. But it isn’t at all. Sure, compared to this pioneer town’s glory days a hundred years ago, when coal mining was at its peak in the Red Deer River valley, Dorothy today is a shell of its former self. A handful of long-abandoned original buildings, in various states of dilapidation, dot the townsite. (The fancy new rest stop bathroom is an exception.) But a few families still live in this picturesque little hamlet, and there’s a surprisingly vibrant sense of community there, thanks in large part to Linda Miller.


Linda runs the Dorothy Bed and Breakfast, the only actual business left in Dorothy, so far as I can tell, where we spent a memorable night on our trip through the Badlands.  Although her place is listed as a B&B, it’s really so much more. In addition to preparing us a bang up breakfast, she made us supper (capped off with Saskatoon berry cake) the night we arrived (perfect after a hot, dusty 110 km day) and packed us a monster lunch to take with us the next day. The best part of our stay, however, was Linda herself and the guided tour of Dorothy that she took us on after supper. Linda grew up in Dorothy, then left for most of her adult life, before returning a few years ago to start the B&B, so she knows the history of the valley and all the families who settled here.

(These days, Dorothy’s faint claim to fame comes via Ryan Peake, guitarist for Nickelback, whose family hails from Dorothy. Linda menitoned Peake several times, though she referred to the band as “The Nickelbacks,” plural, which made me smile every time. I now think of Chad’s gang only by that revised name.)

The old buildings—two churches, a school house, a dance hall—were cool to walk through, but it’s Linda’s stories about the buildings and the people that I’ll remember: mysterious coulees, rugged cowboys, and suspicious remittance men. Her tour-guide spiel, which she’s been honing with an eye to attracting more tourists to this southern end of the Drumheller tourism corridor, was genuine, fascinating, funny, and sweet. (It even included some dramatic performances and a poetry recital!) I highly recommend it to anyone passing through. The price is $2 per person. 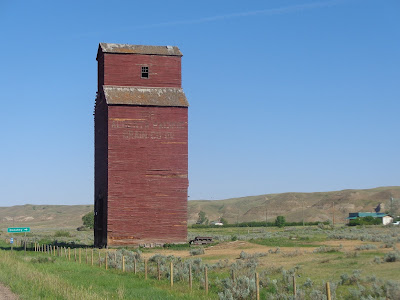 We passed through many super-small towns on our trip, many of which felt like they were slowly dying, like there was an inevitable ghostliness in their future. But Dorothy was different. It felt alive, more like a real community than some much larger places we visited, proof that “community” has less to do with the total population than with the number of Linda Millers.