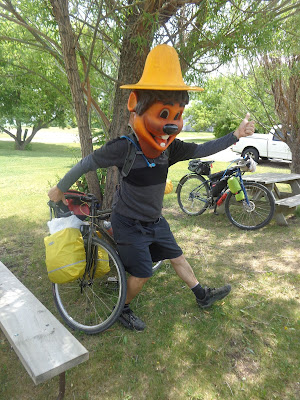 Torrington, Alberta, a hamlet located about 160 km northeast of Calgary, is one of the sadder places we visited on our recent rural adventure. Like a lot of tiny rural communities on the prairies, Torrington has seen better days. Many of the buildings are empty or in a state of severe neglect. The hamlet is not a ghost town—yet—but it does feel like it’s dying. The day we were there the streets were deserted, the cashier of town’s only store (Pizza and More, Eh?) wasn’t exactly welcoming, and, despite a few quaint touches such as colorfully painted fire hydrants, the place just generally gave off a depressing vibe. 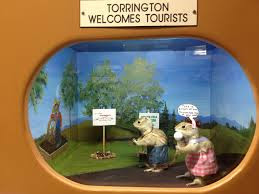 But Torrington does have one thing going for it: the World Famous Torrington Gopher Hole Museum. Now “museum” is a generous term for this establishment. It’s really a shack containing about two dozen small dioramas of dead, stuffed gophers dressed up in clothes and staged in a variety of humorous, if not bizarre, human endeavours. A pool hall, church, firehall, curling rink, etc. In some cases, the stuffed gophers have been even been given little speech bubbles for comic effect. The dioramas are kitschy, goofy, often hilarious, and, in some cases, just weird. There’s even one freakily postmodern scene involving a gopher-taxidermist. 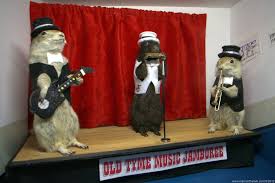 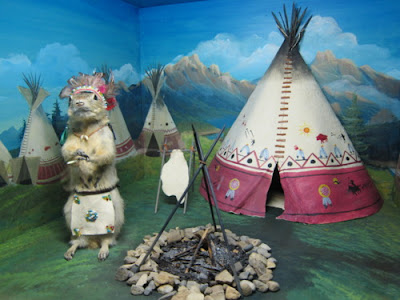 The GHM is so odd that it has gained a kind of cult status. There’s even a fan website. You might think that the appeal of the Gopher Museum is mostly ironic, that city folks visit the hamlet’s “museum” purely out of a sly sense of dark humor—as in, the place is so bad and creepy that it’s funny. But I don’t think that is all that’s going on at the GHM. After my initail chuckles subsided, I was struck by just how well-crafted the dioramas are, how much care and attention to detail has gone into the creation of not just the gophers but the backgrounds of these strange little scenes. 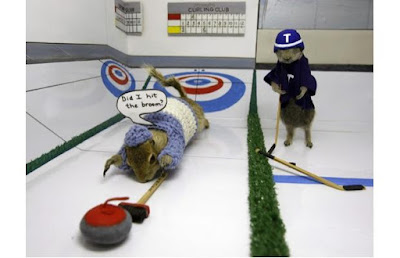 Then I realized that all of the dioramas are set against a fictional Torrington—on streets, beside or inside buildings, civic institutions. Except the fictional Torrington behind the glass is bright, pristine, well tended—everything that the real Torrington isn’t (though maybe was at some point). This might be what makes the place feel like a true “museum”—not the stuffed gophers but this vision of a hamlet that once was, and in the fantasy world of a gopher dioramist, perhaps could be again.