Round the World on a Wheel 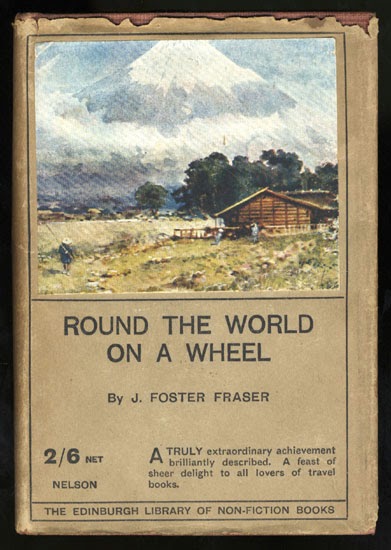 When intrepid English bicycle-traveller John Foster Fraser, in the middle of his trans-world bicycle trip in 1896, met with the governor of a province in Persia in 1896, the sultan asked him why Britons were always rushing off to seek out hardship and danger abroad. “There’s no pleasure in it,” offered the puzzled sultan. Fraser replied, simply, “There’s adventure”—as if this were all he needed to say. The sultan shrugged and dismissed Fraser and company as madmen.

Reading Fraser’s classic book about those “adventures,” Round the World on a Wheel (1899), I was struck by how both men were right. So much of Fraser’s journey was full of hardship and danger. It’s tough to comprehend how difficult such a journey would have been: navigating atrocious roads (and sometimes no roads), coping with mechanical breakdowns in remote places, encountering hostile natives (getting pelted with stones becomes such a commonplace event in Asia that Fraser mentions it the way one might mention a rain shower, an unavoidable natural phenomena that will, eventually, pass),  bad food (or no food for days at a time), illness, filthy lodgings, blizzards, wolves and bears and mobs. They travelled with revolvers—and needed them more than once. There were, of course, some moments of pleasure in the trip, but those aren’t what people remember.

Hardship was the cost of “adventure” and Fraser was more than willing to pay the price. It was well worth it, for Fraser and, indirectly, for us.  His book, the last in the original age of around-the-world and trans-continental cycle-travel narratives of the nineteenth century (by rider/writers such as Thomas Stevens, Frank Lenz, Sachtleben and Allen, George B.   Thayer, Hugh Callan) is a highly entertaining account, chalk full of remarkable adventures.   After all these years, it’s still one of the best cycle-travel books out there. 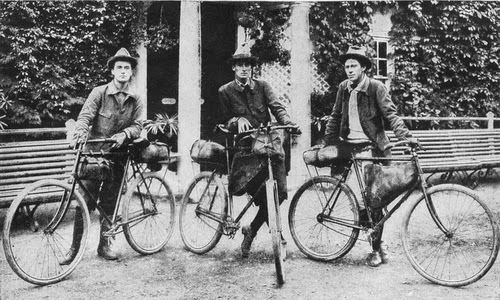 Fraser and his friends, Edward Lunn and F.H. Lowe, set out from London in 1896, on their Rover bicycles, travelling light, each with a frame bag and small front and rear satchels. In addition to the usual gear, they carried notebooks and letters of introduction; Fraser packed a volume of Shakespeare; Lowe carried a camera and photo-developing equipment. (Fraser’s loaded bike weighed 70 pounds, he tells us.) The plan was to find food and shelter along the route. Their trip took them through 17 countries and across more than 19 000 miles in a little over two years.

The charm of this book is that classic British combination of self-deprecation, witty understatement, and supreme confidence. Fraser tells a ripping yarn, and yet keeps the mood light. After describing a harrowing night spent shivering, huddled on the frozen ground outdoors during a blizzard in the Koli-Kush pass, during which the three men almost perished, Fraser deadpans: “It was rather uncomfortable.”

Fraser’s casual racism can be startling to modern readers (“No Chinaman, since pigtails and slant eyes were invented, ever bought a halfpenny worth of rice without haggling over it”) but really it’s of a piece with the age. As was the insufferable smugness and sense of entitlement that accompanied representatives of “the Empire.” (After being accosted by a half-hearted mob in Sha-Yung, China, Fraser says that a single Britisher armed with a rough stick could handle the lot of the savages and their “little Chinese fists.”) Another time, after being jostled by a more determined mob, Fraser complains to the unsympathetic local magistrate, “We’re British subjects!” But as whiny and silly as such comments may be, they come off as more funny than annoying. Oh, those Victorians!

In fact, the plucky lack of political correctness of Fraser and company is partly what makes us like them. In Teheran, when greeted by sticks and stones, Fraser tells us, “The only thing was to dismount, run at the mob, keep one’s fists and toes busy, and then, as cowards were falling back, jump on the bicycles again and make off.”

Some of the most extraordinary adventures and shocking sights occur in China. A decade earlier, Thomas Stevens attempted to cycle solo through the middle kingdom and been forced to turn back, after peasants attacked him. Fearing for his life, he opted to take the safer, longer way around by boat from India to Japan. Fraser’s China is similarly barbaric at times. The travellers witness the grisly torture of a thief who tried to steal Lowe’s camera and see infant girl corpses piled up against city walls. The cyclists hear constant refrains of “Kill the foreign devils.” Locals are wary of the curious “feet machines.” But there’s also an element of wonder, at times, in Fraser’s voice—opium smokers, endless temples, and the world’s tallest man clearly strike Fraser as precisely the kind of exotica found on a true adventure.

Japan, on the other hand, was a “wheelman’s paradise.” After the ordeals of China, Fraser found the impeccable roads, flowers, geisha girls, and civilized tea ceremonies heavenly. Although they had travelled over 14 000 miles by that time, Fraser found Japanese cycling so restorative that it felt “as though we had only ridden for a fortnight and we had discovered a new delight.”

One thing I love about this book is how Fraser talks not just about the places and people but also about the actual cycling experience, especially road conditions. As with almost any kind of extreme bicycle trip, then or now, there were plenty of times where the pedaling was near impossible. Russia was “a land without roads”; in Burmese jungles they had to hire coolies to carry the bikes; they walked some days, took rafts or canoes on others; the only way across the Sierra Nevada range was to ride the rail track; the plod and splash of cart tracks in China in spring time leads Fraser to write that “bicycling became a thing to dream about, not to do.”

Fraser’s round-the-world cycling trip makes much of what most cycle-tourists do today look pretty tame. Of course, “adventure” is a relative term. For some, a fully supported, guided tour across a well-worn route offers adventure aplenty. Others who crave the taste of deeper adventure—think Tour Dividers, for instance—yearn for at least a bit of the hardship and danger that Fraser and company encountered.  And for still others, it’s enough of a pleasure to just read about such adventures.