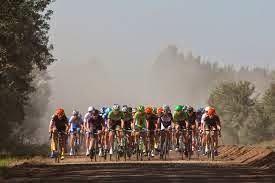 Alas, I wasn’t able to attend any of the final stages of the Tour of Alberta because I was in Vancouver riding the Whistler Gran Fondo (more on this another day) the exact weekend that the race passed through Edmonton. I did, however, watch some of it on television and read some of the press coverage of the race, and I’d like to follow up on my earlier post about the inclusion of dirt road and “Canadian Pavé” sections in Stage 4 in Strathcona County.

At the start of the race coverage on television that day, the announcers made a big fuss about the day’s rustic road surfaces and interviewed a few riders about them beforehand. Some were skeptical (Robin Carpenter, USA), some non-plussed (Ted King, USA), some jazzed (Danny Summerhill, USA), and some just hoping to get through it unscathed (Matthew Hayman, AUS). Summerhill claimed that several of his United Health Care squad riders with backgrounds in cyclocross and experience on Euro cobblestones were particularly fired up for the stage.  (One wonders if Summerhill and mates were just glad to have something interesting to look forward to in a race that featured a flat, boring route, for the most part.)

The actual tv coverage of these sections of stage 4 started out rather shakily. On the first bit of dirt/gravel road, the lead car with the camera was too close to the lead riders; as a result, the riders had to plow through a massive dust cloud created by said car. The effect on tv was both absurd and kind of cool: Amid the dust you could make out silhouettes and the odd bicycle wheel here and there. It was a veritable Pigpen peloton. For the subsequent dirt sections, the camera must have been switched to motorcycle for the cloud was gone. Still, at the end of the race, the riders looked like they’d been working in a coal mine all day. 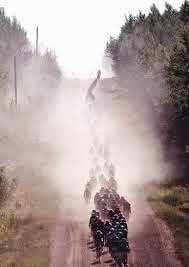 As for the much anticipated pothole pave, well, this did, indeed, cause trouble for some riders. There were flats, and there were crashes, one of which sent Canadian rider Adam de Vos to the hospital. Not surprisingly, the riders who had trouble with the pavé sounded a little peeved after the stage. Benjamin Perry, from the Canadian National Team, said afterwards, “It wasn’t hard but it was dangerous.  . . . It’s kind of unfortunate we had to go through that, when it didn’t split up the race, it just [made] people break limbs.” Perry’s teammate Jordan Cheyne didn’t much care for it either: “I think that’s just pretty bad road work from the province of Alberta, I don’t think that’s pave. I think it’s flat tires waiting to happen and it’s little rocks coming up into my face.”

But some others, particularly the European riders, oddly enough, seemed to enjoy the dirt and pavé. Ramunas Navardauskas, for instance, said the dirt/pave “was pretty technical and interesting to race.” And Tom Dumoulin probably captured the sentiment of many riders: “I don’t know what it means to have Canadian pavé. It was just a bad road with a lot of holes in it but we also had some dirt roads, which is a little bit like the Strade Bianche. It’s a classic in Tuscany and I’ve done it a couple of times. It was a little bit like that. It was a little bit dangerous but in the end, I didn’t think the dirt sections made a difference in the race—but it was cool to do.”

It was cool. The injuries were unfortunate, of course, but that’s part of bike racing. If the purpose of including the dirt and pavé was to introduce some controversy, challenge, and a truly Prairie twist, then it was a success. Here’s to even more dirt and pavé next year.