There’s a curious moment at the beginning of a bike overnight, when your bike is loaded up like you’re going cross country, and you feel a little ridiculous cycling down your block, past your kid’s school and neighbours walking their dogs. It’s sort of like lugging a couple of packed suitcases down the sidewalk through your neighbourhood. The neighbours’ puzzled expressions say Don’t you know that trips generally start with driving to the jumping off point?

But this feeling doesn’t last long. The folks in your ‘hood have no idea what you’re actually up to—that you’re embarking on a micro-adventure, riding your bike to some distant campground beyond the city, into a little bit of wild, only to ride back tomorrow in time for a late lunch at home. It feels a bit like you’re on a secret cycling mission, a sub-24-hour foray out of civilization and back while everyone else carries on with their daily routines.

Last week, as Val and Penn and I headed out on an early season overnight, I felt both of those things: First, that little, almost embarrassing, weirdness and then the squirm of excitement. We are going on an overnight. Our destination was Echo Lake Campground in Westlock County, about 75 north of Edmonton—just about the right distance for an early season ride with touring gear. We’d visit some of our favorite roads to the north, explore some new territory, and maybe even gather some intel on a fat bike route I’ve been scheming. 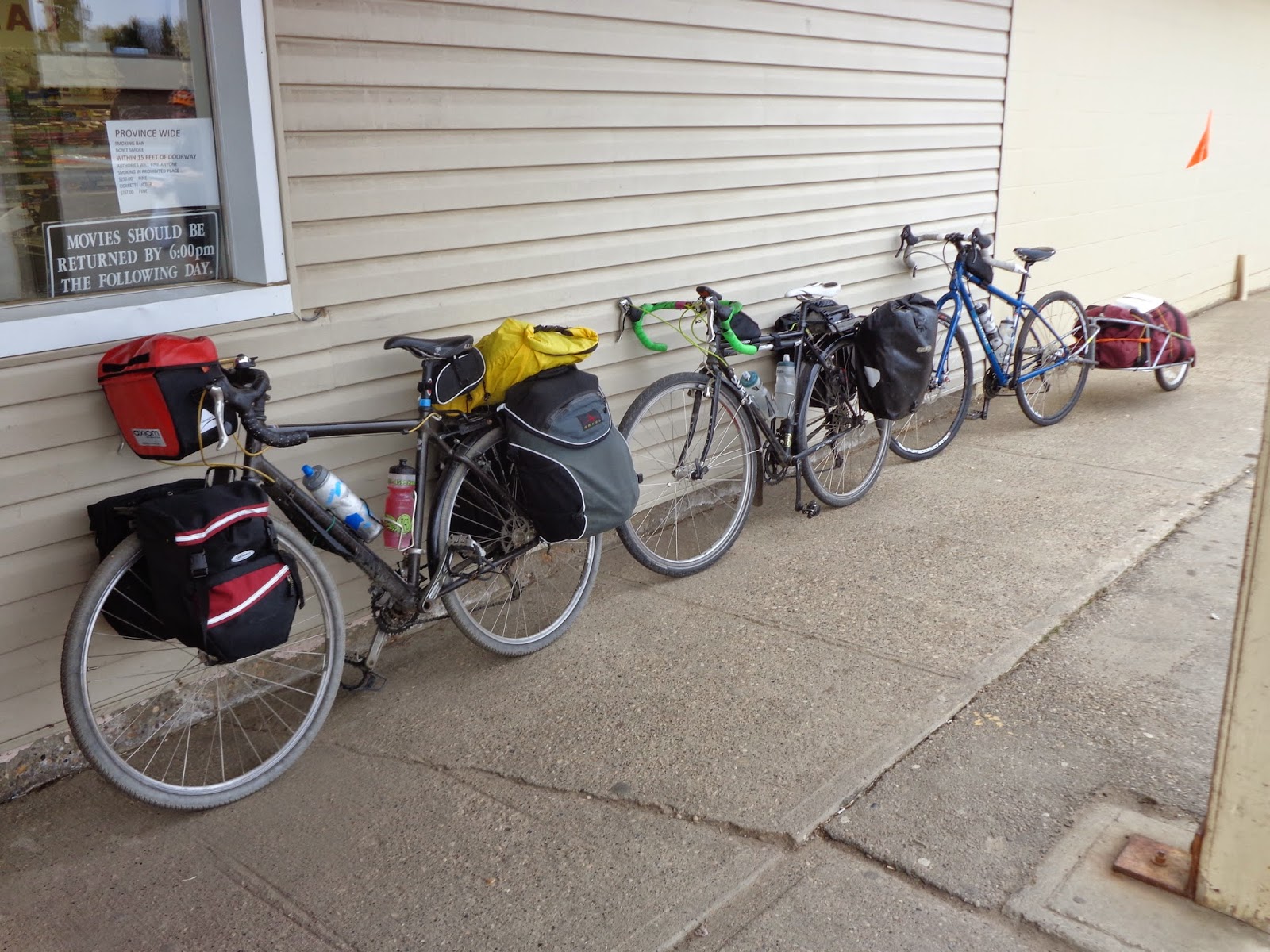 We don’t say much on our way out of the city. Traffic’s heavy, in the early rush hour, and though we’re pumped about our overnight adventure, we need to get clear of the busy roads before we can relax. Only after Johnny’s Store do we begin to feel clear of the urban snarl. We pass a gigantic RV called “Freedom Express” and this instantly becomes the new name for Penn’s Bob-trailer set up.

Zipping north on Sunnydale Road (one of the best riding roads in these parts) our thoughts turn mainly to pizza. We’ll eat at Chelsea’s Pub in Bon Accord, the more or less halfway point, where, rumour has it, the pizza’s so good that folks come from far and wide for it--all the way from Morinville, even! I’m not sure if it’s the overnight talking, but the pizza is, in our opinion, first rate. If I lived in Morinville, I might drive to Chelsea’s every night. The leftover pie gets bungeed onto the Freedom Express.

The Lily Lake Road north of Bon Accord is new territory for us, and that’s when our ride starts to feel like a true adventure. We pass the pumpkin catapult at Prairie Gardens, several small onion-domed Ukrainian churches, the Lily Lake “Resort” (that word gets  used far too loosely around here), and the tiny hamlet of Fedorah, which consists of about eight old buildings, two of which are churches. 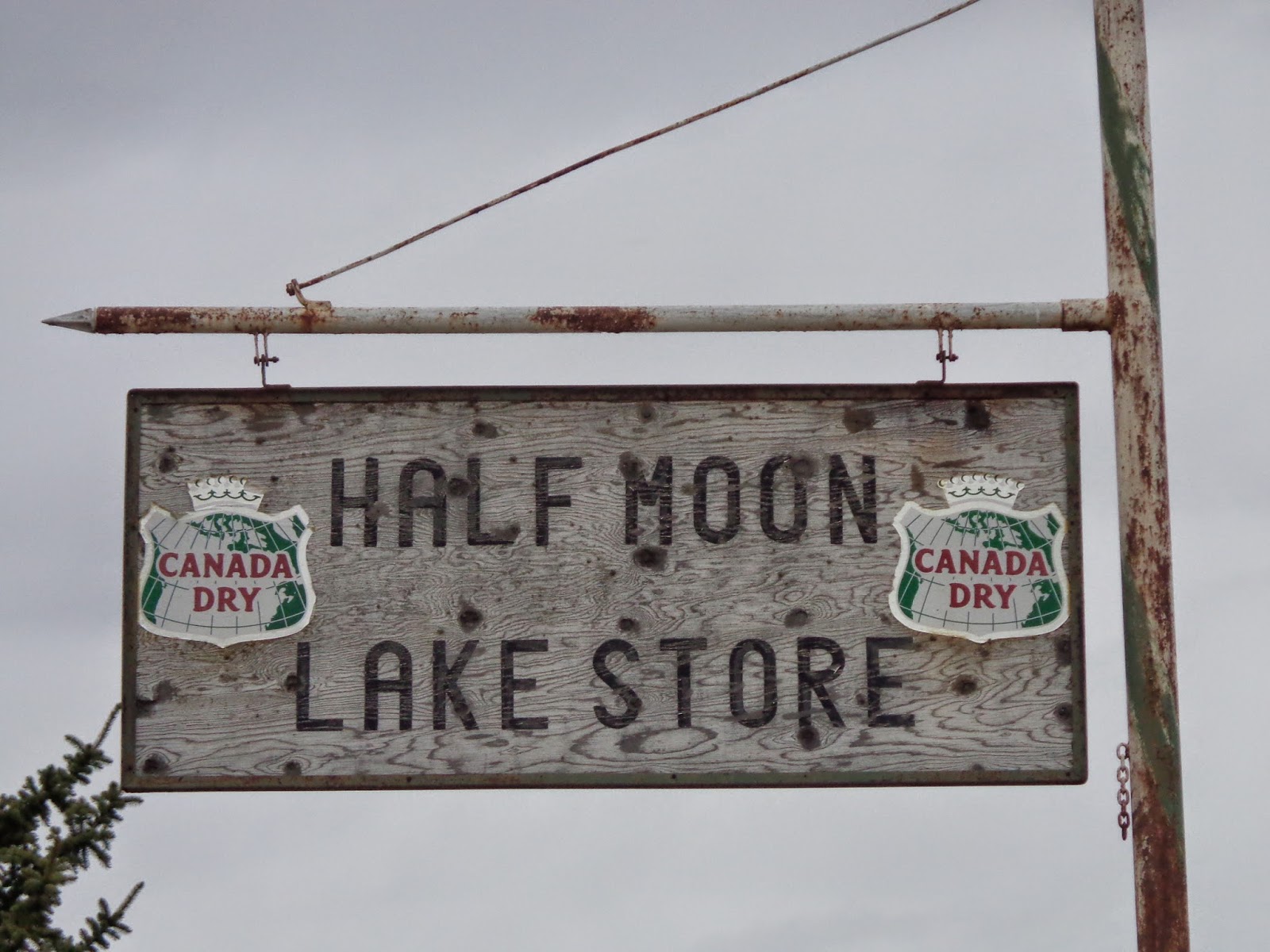 The paved road ends at Half Moon Lake, and the final 5 km to Echo Lake involve gravel grinding on an old settler route, the Athabasca Trail. I’ve read about this trail and studied the squiggly line on the map, wondering at its potential for fat bike touring. In places it feels like any old gravel road, but in others it really does feel like an old wagon trail. Make that a wagon trail crossed with a sand dune.  Cartographic note: Bring fat bikes up here next time. 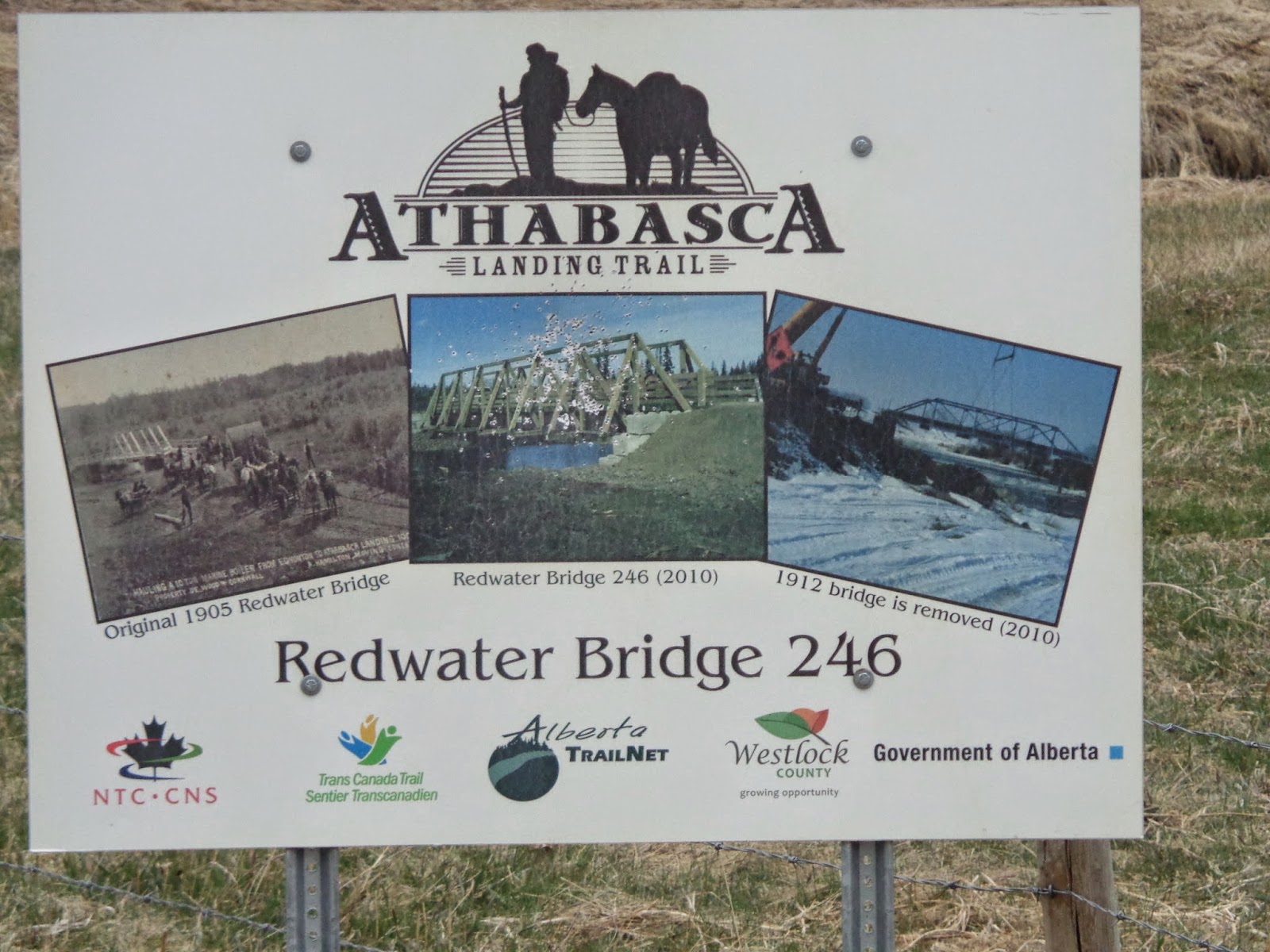 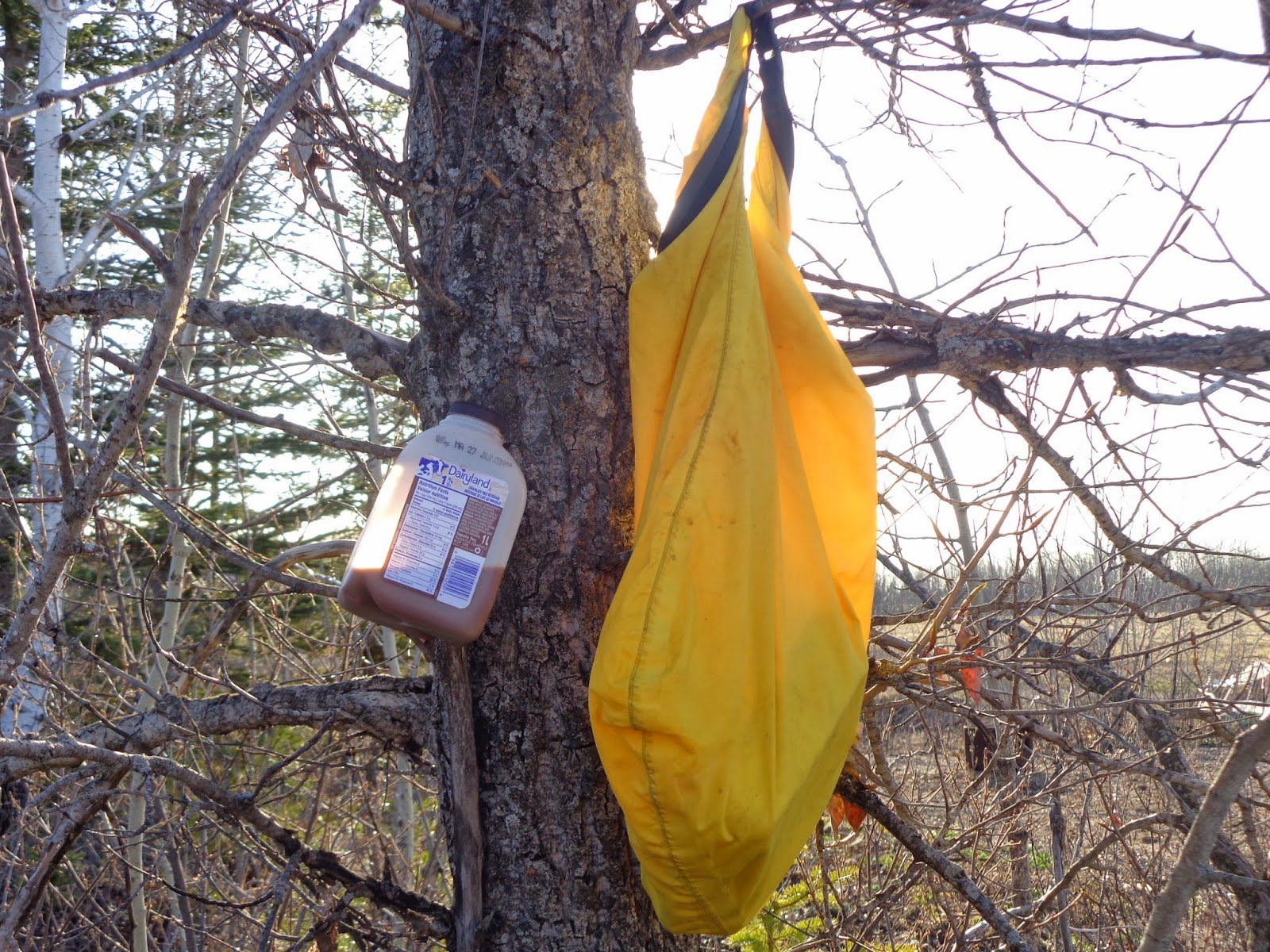 Echo Lake is a new campground, still under development by Westlock County, which means it’s missing some services (like water). But it’s free. The “lake” is an old gravel pit now teeming with leeches. So we skip a swim and opt instead for cheesies and beer and scotch around a fire as the sun sets. The campground is, unsurprisingly, gravelly. We’re the only ones there, and, in fact, since turning onto the Athabasca Trail, we feel suddenly remote, far from the city. The croaking frogs provide the soundtrack. We could be a 750 miles north of Edmonton. 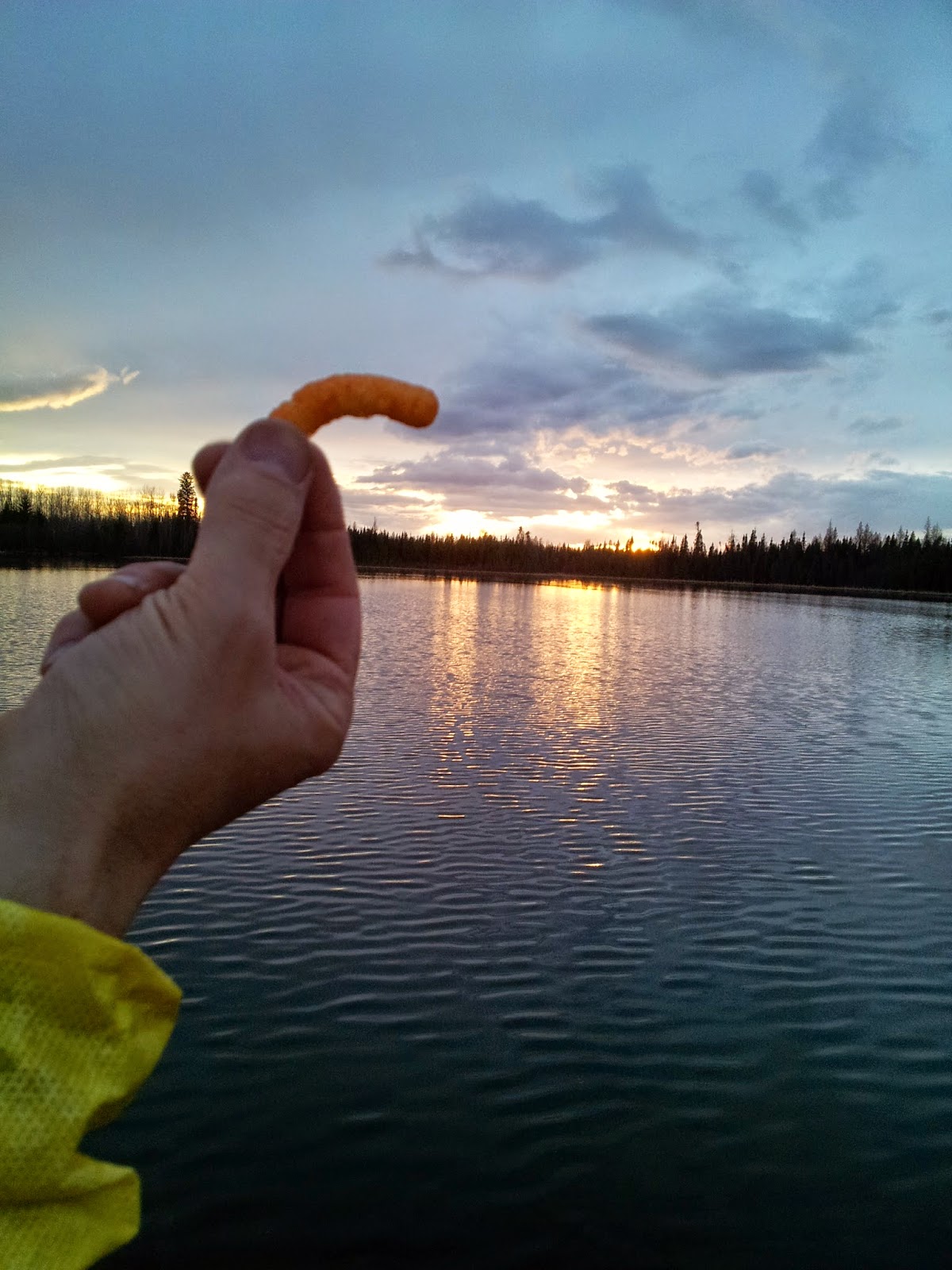 Penn has a theory about overnights. Day one is exciting, fuelled by the small thrill that comes with the anticipation of adventure. Day two, however, is work. All you’ve got to look forward to is returning to your regular life. That’s sort of true for us. Our ride back from Echo has its share of delights--side trips to Half Moon Lake Campground and St. Mary’s Church, more stellar fare from Chelsea's Pub--but somewhere along the way our leftover pizza goes AWOL and the headwind stiffens up. Our time aboard “The Freedom Express” is short--less than 24 hours--but, hey, that’s a train we can always catch again. In fact, it leaves from our front doors.