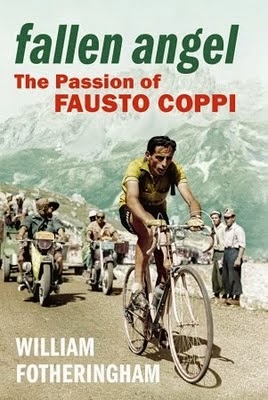 The highest mountain climb of the Giro d’Italia (this year,  it was the Stelvio in stage 27, this past Tuesday) is known as the Cima Coppi (the Coppi Summit) , in honor of the greatest Italian cyclist—and some would say greatest cyclist period—Fausto Coppi, legendary climber and winner of five Giros. In the 1940s and early 1950s, Coppi dominated the cycling world, winning Giros, Tours, a World Championship, numerous classics, and countless track and pursuit races.

Coppi’s status is legendary, and not just because of his prowess on a bicycle. A romantic scandal in the early 1950s and then his shocking death from malaria (contracted while cycling in Africa) in 1960 elevated Coppi’s life story beyond the realm of sport into that of myth. Today his name is revered in Italy and throughout the cycling world.

So when I was looking for a book about Italian cycling to read while following this year’s Giro, Coppi seemed like a good place to start. British journalist William Fotheringham’s Fallen Angel: The Passion of Fausto Coppi (Yellow Jersey, 2009), the first biography of Fausto Coppi by an English writer (there are numerous Italian ones) has made for fascinating reading these past few weeks. It’s a fine account not just of Coppi’s remarkable and tragic story but also of the role of cycling in a tumultuous period of Italian history.

No cyclist, as Fotheringham points out, has inspired so many writers and artists. Coppi’s life has been the basis for many Italian novels and films, and it’s easy to see why.  His rise and fall features a cast of characters taken from a combination of Greek myth and Hollywood scripts: the blind soigneur-mentor (Biago Cavanna); the whip-cracking former-star-turned-coach (Alfredo Binda); the cursed jester-brother (Serse); the dutiful, quiet wife (Bruna); the mysterious “White Lady” who lured him away (Giula); a chorus of loyal gregari; and even a meddling Pope.  He was beloved, then briefly loathed, and, finally, after his death, beloved again.

Coppi was full of contradictions. He was a shy man, something of a loner, but he made his romantic troubles into a very public affair, essentially ensuring that he would never be left alone by the press. His family origins were rooted solidly in the rural nineteenth century, complete with superstitions and a distrust of the trappings of progress. (Fotheringham tells the story of Coppi using some early winnings to buy his mother a refrigerator and and her using it to store her underwear and kindling. She had no clue what else to do with it.) Yet Coppi is now considered largely responsible for modernizing professional cycling, introducing, for instance, modern training techniques (he was the first cyclist to try interval training, for instance) and race strategies. He was also one of the first cyclists to pay serious attention to matters of diet. (His great rival, Gino Bartali, famously smoked and drank like Sinatra; Coppi, meanwhile, abstained from these vices, which made him a rarity in both Italy and the cycling world; he also eschewed the traditional food of cyclists, such as the “Binda Zabiaone,” 20 egg yolks in a water bottle.)

Fotheringham offers a vivid portrait of post-war Italy and the role cycling played in helping a nation discover its identity. After the war, there were 3 million bicycles in Italy, and only 150000 cars. Cycling was central to Italian life. The country was shattered during and after the conflict, and bicycle racing, a working-class sport, provided a sporting distraction and source of national pride. Poor bike racers would compete for meagre  race prizes, a salami or a pig.

The book’s account of the Coppi-Bartali rivalry is terrific too. The two men were such opposites—Bartali  the charismatic, easy-talking Catholic boy with deep political connections; Coppi the enigmatic, shy, peasant’s son who preferred the company of his hunting dogs to most people, who refused to align himself with church or state.  In a way, they hated each other. ( In a perfect detail, Fotheringham tells how neither man would utter the other’s name out loud. Conversing with journalists, each would refer only to “that one.”) Yet the two men shared a mutual respect and pushed each other to remarkable heights, between them winning pretty much every important race in Italy for a decade.

The story of Coppi’s off-bike infamy, his mistress’s trial for adultery in 1955, is also remarkable. It reveals much about the shifting Italian attitudes towards religion and the painful but inevitable modernizing of a nation. In contrast to the good Catholic Bartali, Coppi was, as the book’s title suggests, a secular saint. What was really in the dock in that trial was an outdated moral code; in this way, off the bike, Coppi may well have helped modernize not just cycling but Italy itself.

How much of this was intentional on Coppi’s part? It’s hard to say. His behavior during the scandal was astonishingly naïve and brave at the same time. Scandal could have been avoided if Coppi had simply played by the usual hypocritical rules and kept up the façade of marriage while keeping a mistress. But that wasn’t what he wanted. It’s easy to say Coppi just wasn’t very smart, but that doesn’t quite cut it.

Coppi was the cycling world’s Elvis--a handsome but not-that-bright genius of humble origins, a once-in- a-century talent, but also a star who stayed in the game too long, allowing himself to become a kind of self-parody near the end. And, of course, a man whose mythic status was cemented by a relatively young and tragic death.

The Stelvio wasn’t just this year’s Cima Coppi. It also features a permanent memorial to Coppi, as do many other places in Italy, including the famous “cycling church” of the Madonna del Ghisallo above Lake Como. Coppi’s breathtaking talent together with his fame and his personality conspired to make him an isolated, misunderstood figure, and one of the favorite romantic images of Coppi today is that of the man alone on a bicycle, launching a long solo attack, against impossible odds, and soaring to victory. That romantic image of un uomo solo, inscrutable, determined, is so archetypal that it's no wonder people still find Coppi's story worth reading about.