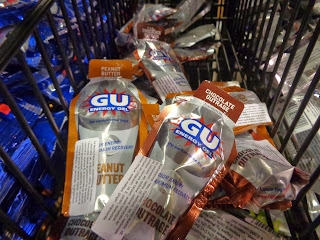 GU Energy Gel is the only energy gel maker I know of to produce a peanut-butter-flavored product. And all you have to do is try it to realize why no one else has bothered.

Now, I love ya, peanut butter, but you’re just not a good fit for a gel—at least not on your own. The problem with GU’s pb gel is simple: it’s too damn peanut buttery. After squirting an envelope of the stuff in your gob, you know precisely how that poor dog feels—the one whose owner thought it would be “hilarious” to see how Fido would like peanut butter. The goo adheres to the roof of one’s mouth and initiates a quicksand-like tongue-immobilizer reaction. One’s brain instantly calls for saliva but it’s too late—the pb has contracted the inside of the mouth, glomping up the salivary release points.

All this is compounded by the fact that athletes who are bound to buy and consume this product will likely already be experiencing a state of dry mouth brought on by physical exertion. The thought of choking down a satchet of warm pb on a hot, dry bike ride is, for many people, about as appealing as sucking on a tiny bag of sand.

The solution to this problem is clear. Peanut butter is just one of those foods that cries out for a companion. Let’s face it, PB, like most of us, you’re at your best in company. Unless GU is thinking of marketing their pb gel packs with little bags of Ritz crackers or mini-toasts or pickles, they are going to have trouble selling these to any but diehard peanut butter nuts.

The most obvious companion candidate is peanut butter’s soul-mate, chocolate. As Reese’s figured out long ago, the dry sweetness of chocolate is the perfect counterpoint to the oily saltiness of peanut butter. They’re a proven duo, a winning combination. So the big question is this: Why in the world doesn’t GU—or someone, ANYONE—make a peanut butter-chocolate combo gel pack? 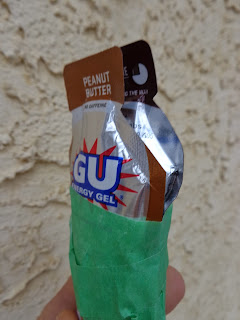 It’s a mystery. But no point moping over it. I’ve decided that if GU and the other gel giants won’t make one, then I will. Turns out I’m not the only one thinking this. I see on the interweb that some plucky, upstart types have taken to making their own combo gel from scratch. But I’m too lazy for that. My idea of some DIY initiative involves taking a roll of tape and two GU gels (one chocolate and one peanut butter) and creating my own taped-together-double-barrel action.

The project, however, proved more complicated than I thought it would be. Tearing off two tops at once requires some serious jaw power; getting the goo to squeeze out at the same rate is a bit tricky too. Overall, though, the dual action more or less works. The texture was just right. But as the two flavors melded in my mouth, the chocolate more than tempered the peanut butter. In fact, I could hardly taste the pb at all. (Maybe the ratio’s not right. Could I need two pb’s for one chocolate? Am I going to need more tape?) Plus the GU chocolate tastes more like chocolate pudding than chocolate bar. My twin-tubes experiment wasn’t quite as satisfying as I’d hoped. 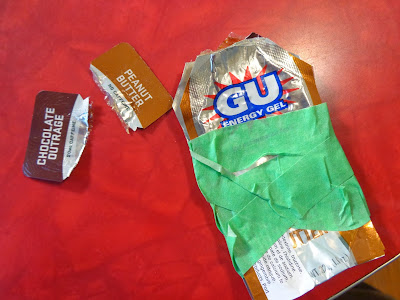 But I’m not giving up. I’m sure Reese’s didn’t get it right on the first try. Maybe a different brand of chocolate gel is what I need. Would it be heresy to combine GU peanut butter with the richer CLIF chocolate?

I’ve got other combo concoctions I’m eager to try now too: Peanut butter and raspberry? Espresso and chocolate? Mandarin orange and chocolate? In any event, I’m headed back to the lab. I’ll get it right eventually. GU would have you alone, peanut butter, but I’ll find you a gel companion. You deserve one.