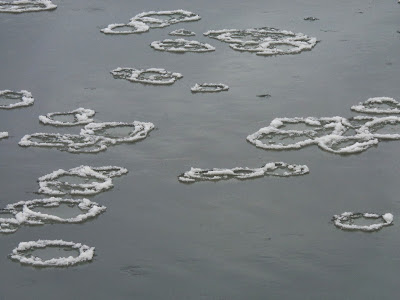 It happens quickly, sneaking up on even long-time Edmontonians. One day the river valley is brown and bare and the water is gently skiffing along. The next week, it’s all white fluff and chunks are beginning to form and bunch in the North Saskatchewan River. That week or two when the river ices up is a perfect time to grab the camera and go riding on the river valley trails. I went on three short ice-up rides over the past 10 days. Here’s what I discovered. 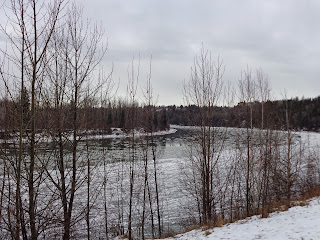 There may be no better time of the year to watch the river. If it weren’t for my feet getting cold, I could stare at the ice chunks bobbing past all day long. The mini-blobs look uncannily like bacteria under a microscope, or maybe platelets or cells coursing along in a bloodstream. Which, I suppose, the river is, in its own way. The globs join, split apart, shift around, moving surprisingly fast, cooking along at a steady clip.

While I was stopped on my first ride, to take pictures of the blob flotilla, I heard a guttural scraping sound, like a snowplow blading the roadway. But I was far from any road. What the heck? The sound was coming from the river—chunky-chunks of ice rubbing up against the iced-up river bank, little tectonic plates bumping, sometimes sticking for a few moments, before the current carried them further downstream. There was something vaguely eerie about the scraping—the dark counterpart to the hopeful crack up of the spring thaw. 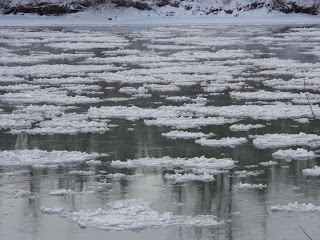 I had company for the second ride, on a frigid Sunday morning after a big November snow dump. Val with his fatbike and me with my pathetic mountain bike descended into the frosty valley. I’ll admit it; my machine was overmatched by the 20 cm of white stuff. The thought of eventually gaining a prospect of the icy river was all that kept me grinding on. (That and Val’s coaxing as he cruised along effortlessly—fattily—beside me.) It was worth the effort. The blobs had grown; their pace was slower. About 30 minutes in, we had the good fortune to meet a sweeper plow clearing the river valley trail. (On a Sunday morning no less!) The riding got a lot more fun for me after that, though once I didn’t have to work so damn hard, I realized how cold it actually was out there. Val’s very beard was icing up by the time we rolled home. 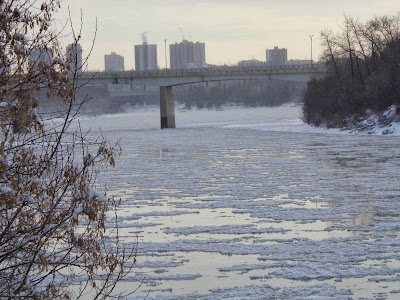 My final ice-up ride was this past weekend. After a solid week of hardcore Alberta deepfreeze, the transformation was complete. The frisky amoebas were gone, chased off by an Arctic front, replaced by a solid mass that stretched from shore to shore. The ice was in. Winter was back. For the next five months it will be stillness in the river valley. 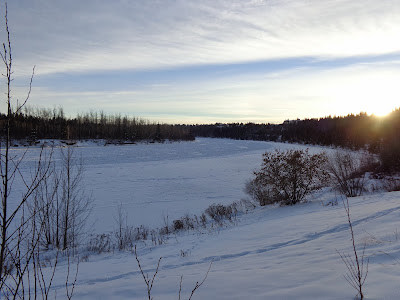 But I don’t mind at all. (Check back with me come March.) Now, the river is just bewitching in a different way. With all that ice, there’s really only one thing left to do: go for a ride on it.