That’s what Karl Kron, author of Ten Thousand Miles on a Bicycle
(1887), gives as his answer to the question he found himself frequently bearded with in the 1880s: “What’s the best costume to adopt for touring on a bicycle?”  While this question may be almost as old as the bicycle itself, it remains now, as it was in Kron’s day, a “tremendous subject of cycling” discussion. Check out some bicycle touring forums, and you’ll see what I mean. Today’s debates tend to be about comfort, utility, and style, but in Kron’s day, cyclists had to consider much more practical needs when selecting a “costume:” namely, finding a place to sleep.


In the early days, when cycling was still in its short pants, so to speak, touring riders were sometimes viewed as little more than tramps awheel, a curious subspecies of the sketchy, shiftless drifter. These cyclists inevitably rolled into unfamiliar towns on their strange machines, dusty, grimy, sometimes mud-splattered, where the locals tended to greet them with a wary eye reserved for the unfamiliar, the outlyer.

In fact, early cycling club uniforms borrowed from military dress traditions in an attempt to gain some respectability, to counter this trampish reputation. Early cyclists in rural England especially had to contend with xenophobic rockhurlers. It was thought that these country yahoos might respect military-style uniforms, bugles, and cavalry formations and refrain from tossing things at passing cyclists who looked like soldiers. The plan largely worked. In fact, by the mid-1880s, cycling club rides were seen as not only respectable events but bits of pageantry to be taken in, like any other parade.

Early cycle-travel accounts from the 1880s tell of discrimination at inns, usually due to cyclists appearing unkempt or just having a bad reputation. Charles Edward Reade (aka “Nauticus”), Thomas Stevens, and the Joseph and Elizabeth Robins Pennell, all intrepid cycle-tourists of that decade, write of being turned away from inns, given the worst rooms, or simply treated rudely because they were cyclists. The Cycle Touring Club (CTC) in England was formed, in part, to advocate for cyclists’ rights, with part of its mandate being to publish a list of cyclist-friendly inns, where wheelmen could count on being taken in for the night. 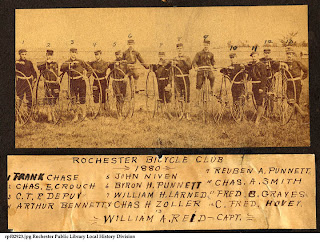 As a wide-ranging cycle-tourist himself, Karl Kron knew the necessity of looking sharp awheel. He preferred a white flannel shirt and breeches because he thought this costume gave a kind of “moral advantage,” as he puts it. He means that white fabric shows the dirt more than any other color; therefore, its wearer is forced to keep himself clean. White is unforgiving, demands care, attention, frequent trips to the wash tub. The implication is that the cyclist who dons a brown shirt or grey breeches is lazy—merely confirming the stereotype of cyclists as modern tramps.

Kron observes that a white shirt can only be worn for a couple of days before it must be washed—perhaps 5 or 6 if the wearer cheats and turns it inside out. But washing leads to shrinkage, so when the shirt gets too small to wear, Kron recommends cutting off the collar and refashioning it as an undershirt. (Remember when men wore undershirts?) Shrunken breeches could be cut up into rags to be used for polishing the nickel.

This nickel plate finish on the bicycle (still used today in some circles), though not technically part of a rider’s costume, serves a similar function of making a positive first impression and giving “dignity to the pastime of bicycling.” Nickel plate, Kron says,
is a voucher for his [the cycle-tourists’s] respectability, an emblem of the probable presence in his pockets of money enough to pay for all he wants. The glittering spokes of an all-bright bicycle enlighten the stupidest landlord to the fact that the bedraggled and mud-bespattered man who pushes it along is not a casual tramp, but a person of substance whom it will be politic to treat with civility and deference.
Even the trains’ “most reckless baggage-smasher” was sure to take special care, if the machine was nickel plated. Nickel, however, requires constant attention to keep it looking shiny; Kron liked this, however, savoring the experience of polishing his machine before a crowd of onlookers. He claimed the well-maintained nickel plate served as a kind of mirror, in which the “philosophic tourist” might “watch the varying phases of human nature around him.”

Mirrors, of course, are more frequently used to look at oneself rather than others. There is more than a hint of vanity in Kron’s approach to costuming. It’s hard not to get the sense that he liked to stand out from the crowd. Isn’t that one reason people wear “costumes” of any kind?

Today, in most of the world, cyclists need not worry about the credibility problems Kron and associates faced in the 1880s. If anything, now a touring cyclist’s machine alone—nickel plated or no—provides a “moral advantage” regardless of the cyclists’ attire. The bicycle has been known to invite extraordinary hospitality: offers of free lodgings at the homes or in the backyards of regular folks.

Cycle-touring has come a long way since Kron’s day. Yet cyclists’ fascination with “costume” persists. Kron took pride in his appearance in the saddle and enjoyed being noticed. That’s not so different from a lot of cyclists today.
Posted by Jasper Gates at 2:10 PM