This is the time of year when both gifting and gifts occupy a significant amount of mental space. I'm a bike guy, and, naturally, I know a lot of bike guys, so I've been thinking about bike-centric gifts a bit lately. What I think, mostly, is that I am afraid of them. 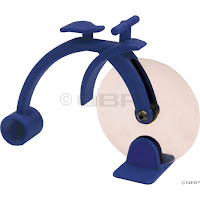 That thing up there, if you can't tell, is a pizza cutter as envisioned by the otherwise reputable Park Tool. Back in the days when I worked at a bike shop, these cheap, plasticy, things would start to arrive shortly after Halloween, year in and year out. Unfortunately, that was a very long time ago--and yet you can still order that fairly ridiculous item right now from Universal Cycles. What this means, of course, is that year in and year out, shortly after Halloween, people continue to hand over money for the opportunity to own one of these.  Enough people, essentially, to make it a fixture of the season.

Who are these people? They are the same people that happily hand over forty-five dollars for ties like this:


They are, in my imagination, two distinct--but distinctly related--groups of people. The first and biggest group must be the co-workers, children, spouses and others who know and care about a cyclist while simultaneously knowing and caring very little about cycling.  I am sympathetic to these folks; I recognize the good intentions behind googling "bike gifts" or somesuch and ending up with these options.  Unfortunately, these intentions end up with perfectly innocent cyclists having one of these things sitting on their desk:

Which is fine if said cyclist owns a bike shop or works as a tour guide. It's less appropriate if you happen to be a heart surgeon or a car salesman.  But sit there it will, because NOT putting it on your desk or tying that tie around your neck is essentially tantamount to telling your aunt to go to hell.

Unless, of course, said cyclist belongs to the second group of people who buy these things--the self-identified Cyclist.  Far more committed to the lifestyle than the semi-serious cyclist, yet with less purposeful intensity than the USR, I think of this group to be made up of folks like the dad from Calvin and Hobbes. Guys that don't have a lot of defining characteristics outside of their job and their one, simple hobby.  Guys who think its essential to let everyone know that they not enjoy cycling, but are Cyclists, at every possible moment.

The problem with the self-identified Cyclist is that they're especially vulnerable, because they're buying these gifts for themselves. Your poor wife is only going to be taken for fifteen bucks if she takes Park Tool up on their pizza cutter.  It would take a terribly misguided self-interest, however, to drop $275 on a Campagnolo corkscrew:

Yes, two-hundred and seventy five dollars. Competitive Cyclist has a fine, persuasive review of this product here, but I think it's pretty clear that anyone who would want to buy one of these doesn't really need to be talked into it.  (Nevertheless, an excerpt: Functional, attractive, strong, with smooth action. Long lasting, and with the added feature of being repairable." Uhhhh....ok.) Paying that kind of money for one of these is simultaneously an act of self-definition and self-delusion.  Xmas is a funny time of year like that.

Traditionally, I would find my way out of an article like this by offering some legitimate gift ideas for the cyclist in your life, but I can't really do that. The trouble with being deep into a passionate and consuming hobby like cycling is that the things you want and/or need are either esoteric or entirely personal and idiosyncratic.  Cyclists have to live with their gear in challenging and uncomfortable circumstances, and it's difficult to have someone else successfully buy your underwear in the best of cases.  Good luck, folks--you have a difficult task ahead of you.  Still, if you're desperate, a couple boxes of Clif bars or a bottle of Hammer Gel would never go too far astray.  Just don't try to oragami the wrappers into some sort of a necktie.