I’m pretty sure that at one time or another I’ve ridden my bike on all the country roads (paved and gravel) southwest of Edmonton, as far as the town of Devon and a bit beyond. With one collective exception: the No Exit roads, the dead-enders that bump into the North Saskatchewan River, some of them only a few hundred metres long, others a few kilometres. I’ve tended to pass by these No Exit roads without much thought, since, well, they don’t go anywhere. Why would anyone take such roads, unless you actually lived on them? 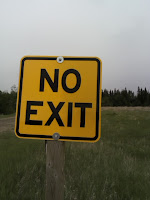 Then one day a few weeks ago it occurred to me mid-ride that these No Outlet roads (as some of our American friends might call them) might be worth a look. Here at the Dusty Musette we’re always up for new gravel adventures, so I schemed up this ride. The premise was simple: I’d ride my bike ride along the country roads close to the North Saskatchewan River southwest of Edmonton. Every time I passed a road with a No Exit sign, I would turn down it, ride as far as I could go, then turn around and ride back to the main road, and continue following the river. Call it my tour of the roads to nowhere.

I got a bit spoiled on my first turn. This No Exiter went on for 3 km, down, down into the river valley. It went on for so long that I forgot that it was a dead-ender. I passed a sign informing me that I was passing through “riparian wetlands” (whatever those are) before the road abruptly ended at a couple of spooky driveways. It was eerily quiet; I didn’t see any vehicles or humans.

But most of the these roads are much shorter. In for a quarter mile, maybe a half, and then right back out. I quickly realized that on this kind of ride, it takes forever to get anywhere. The pace was slow, mostly on gravel, and lots of up-and-down the river valley. After a couple of hours, I’d covered ridiculously little ground, at least in terms of map distance.

After going down a dozen or so of these roads, I began to feel a bit like a dumb rat bumping along the perimeter of a maze, methodically taking every turn, only to then have to double back before moving on to the next turn and doing the same thing all over again. (A couple of times I was tempted to cheat, and not turn down an unpromising looking No Exit. But I always did. If nothing else, the No Exit Ride demands integrity and some perseverance.)

Once I got accustomed to the rhythm of this ride, however, I started to kind of like it.  I began to realize that these lanes looked slightly different going out than they did going in. I noticed new details, saw the trees, even the gravel, in a different light. Plus there was something about this perverse, almost-Sisyphian task that appealed to my absurdist, existentialist streak: I gladly turned down the No Exit roads precisely because I knew that they went nowhere. Albert Camus, the coolest of the existentialists, and apparently a cyclist of sorts, would have loved it, I think. (I didn’t realize until after the ride that Jean-Paul Sartre, a relatively uncool existentialist who also rode a bike and even penned some oft-quoted if baffling lines about cycling, actually wrote a depressing-sounding play called No Exit in 1944.)

Dogs proved to be the only obstacle. Turns out lots of people live on these dead-end roads, and all of those people are required to own big, menacing dogs. Cyclists are easy pickings, especially vulnerable since they are moving slowly, pretty much have to stop at the end, and then have only one way out. Several times I wished Penn, the acknowledged Dog Whisperer of our triumvirate, was with me.

My closest call involved a huge, shaggy canine beast who only noticed me after I’d already passed his property. I knew I was out of pursuit range, and therefore I wasn't worried. But my victory was short lived. Rex was smart. He knew I had to come back his way eventually, so he waited for me in the middle of the road. Having few options, I decided to take a run right at him. I worked up what speed I could and then blasted towards the bastard, screaming like a Banshee. (Penn, who has only to raise his hand Obi-Wan Kenobi style to silence a dog, would have just shook his head at my antics, I’m sure.) It worked. The startled creature stepped back in alarm and silently let me sail past without pursuit, wanting no part of me. My heart rate eventually returned to normal—at least until I encountered the next dog.  I made a mental note: next time wear my Kevlar chaps on a No Exit Ride.

After a while I began to wonder if any of these roads would make it to within peeking distance of the river before dead-ending. I knew that part of the point of my No Exit Ride was to get beyond the destination imperative that tends to inform my route-making, but still I kind of hoped for a prospect. Then on my last road, sure enough, I glimpsed a large opening on the other side of the trees, which could only be the river valley. I stopped at a little look out and wondered who could even know about this view.
While there may technically be no exit on these roads, that doesn’t mean there’s no reward to be gained from riding them.
Posted by Jasper Gates at 11:52 PM