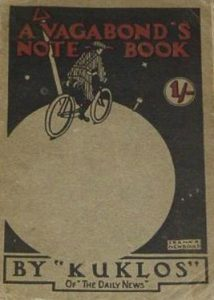 In the brief Prefatory Note, Kuklos describes these pieces as “the notes of a vagrom man with a bicycle,” which he says were “recorded piecemeal, in the inglenooks of old inns, upon high moors and under hawthorn.” But the word “notes” (never mind the romantic image of them being dashed off on the spot) with its associations of off-the-cuff jotting, doesn’t really do justice to these finely crafted cycling essays. They transcend the ephemeral nature of so much journalism and, in many cases, are as delightful to read now as they probably were a hundred years ago.

Almost all of them are travel pieces recounting bicycle trips to places like Ireland, France, the Lake District, Cornwall, the Isle of Wight, and various other English destinations. The most frequently referenced locale, however, is Yorkshire, which isn’t a surprise, given that Wray grew up there. In four different short essays, Kuklos writes about the pleasures of his native territory, from the charms of the secluded hamlet of Dentdale (and the “cosy parlour of the Sportsman” inn, which no doubt featured inglenooks aplenty) to an ascent of the famed Buttertubs Pass, and a night of carousing with fellow cyclists at the Tan Hill Inn, then–and still today–the highest licensed house in England.

Like Elizabeth Robins Pennell twenty years earlier, Kuklos is a literary cycle-traveller, fond of quoting Robert Louis Stevenson, in particular, but also dropping names like George Meredith, Richard Jeffries, and Longfellow, among others. Despite what he says in the epigraph above, Kuklos clearly reads nearly as much as he rides.

His particularly British style combines erudition with a droll wit (describing a hairpin turn, he says, “For the first time in my life I was subjected to the indignity of a dismount to lift my back wheel round a corner!”), folksy expressions (a tough ride is a “ding-dong slog,” for instance), a snobbish emphasis on good food and drink (“I like Cockermouth, because it makes a good tea”). His prose is, by turns, poetic, grumpy, and ecstatic.

A vagabond on wheels from any century will relate to his focus on road conditions and wind. “No sort of weather, I think, could mar the joy of this Portsmouth Road, and I began to be very glad, though the backing wind came more from the sou’-west, and strong. I pumped some of it into my tyres, having reached faster roads.”

The best pieces in my view are the longer ones on Cornwall and Brittany, in a way, two halves of the same trip (both from 1906). In “Cornish Pasty,” Kuklos treats Cornwall in December almost like a foreign land, with it’s strange place names, curious saints, quaint fishing villages, wild coastlines, and odd inhabitants who “Crabwise . . . sidle up to the lone cyclist” in order to make their “proffer of polished pannikins and picture postcards.” His teasing of the locals aside, he loves it there, calling it “a tour that ranks among the most enjoyable in my experience.”

In “Brittany Awheel,” Kuklos and his Yorkshire friend Cyclops visit Cornwall’s “sisterland” across the channel in May, when the colors of broom and hawthorne bedeck the place: “Just now, all this country is a harmony in white and gold.” Being able to speak French gave Kuklos an advantage among the Bretons, even though he downplays his linguistic skills in that self-deprecating English way: “You see, my rain hat is a funny shape, and so is my French.” He both admires and ribs the natives and their ways, at one point joking that the “French way” to eat soft-boiled eggs seems to be “to drink them out of the shell.”

The exception to the travel theme is the stellar “Back Thoughts,” a charmingly odd piece that Kuklos himself liked so much that he reprinted it 20 years later in The Kuklos Papers. The title comes from his predicament: lying flat on his back from a bout of “la grippe.” Cycling isn’t an option, in that state, so he turns to reading instead, and finds himself pondering the Book of Job, which, it turns out, offers plenty of advice that comes in handy for any cyclist who’s experienced a day of “tribulation” thanks to inclement weather.

The books of Kuklos are hard to find these days–out of print, out of stock even at used book sellers. A Vagabond’s Note-Book, in particular, is almost impossible to track down. Which is a shame, as his work deserves–and would be enjoyed by–a twenty-first-century audience. “Vive la bicyclette!” Kuklos says at the end of one of these essays. To that I would add, “Vive le Kuklos!”
Posted by Jasper Gates at 4:12 PM