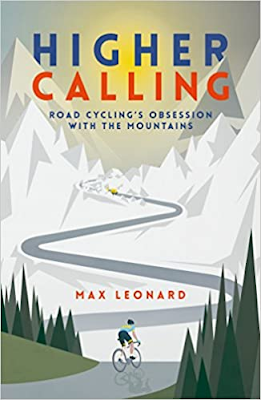 “There is nothing that improves a mountain view more than a nice bit of squiggly road going up it.”       --Max Leonard

Higher Calling: Road Cycling’s Obsession with the Mountains (2018) is the kind of wonderful book idea that I almost wish I had thought of myself: exploring the rich tradition and magic associated with ascending mountains on bicycles. Previous books have looked at cycling’s connection with particular peaks (think Peter Cossins’s Alpe d’Huez: The Story of Pro Cycling’s Greatest Climb or Jeremy Whittle’s Ventoux: Sacrifice and Suffering on the Giant of Provence) but British writer Max Leonard, author of the very fine Lanterne Rouge: The Last Man in the Tour de France (2014), and one of the brains behind the Rough Stuff Fellowship Archives, aims much higher. His book offers an ambitious, entertaining, and surprisingly wide-ranging account of our fascination not just with riding up (and down) mountain roads but with mountains in general.

Much of the book’s focus is on Grand Tour racing, with stories aplenty from the Tour, Giro, and Vuelta. As every bike racing fan knows, mountains are almost always where the decisive drama, heroism, and heartbreak of Grand Tour racing happens. Casual fans like me tend to circle the mountain stages on the calendar, for we know that these are where shit will go down–where the GC will be won or lost.

But to his credit, Leonard takes a broader view of mountain cycling than just the Grand Tours. As he explains in his prologue, Leonard is also interested in exploring the psychology of climbing mountains (testing the old “because-it’s-there” theory), the physiology of ascending, especially at very high altitudes, and the materiality of roads in the mountains (how they got there, who maintains them). And as the title of the book implies, Leonard dabbles with the spiritual, philosophical, mythological, and literary aspects of the role mountains play in human consciousness.

Among the many pro-cycling topics he explores are the story of how mountains came to part of Grand Tour racing; profiles of some climbing legends (Rene Vietto and Federico Bahamontes); lore around what are now considered legendary racing and training climbs (the Madone, Ventoux, Mount Teide in the Canary Islands); an in-depth profile of American pro cyclist Joe Dombrowski’s relationship with mountains; and a stirring personal account of the decisive stage of the 2016 Giro.

But it’s not all about the pros. Leonard delves into climbing stories that are more relatable to your average (serious) cyclist, like the role Strava’s KOM has played in how people think about climbing, the curious world of Audax riding in France, and the phenomenon of Everesting, which, interestingly, was created by none other than George Mallory II, grandson to the man forever associated with the world’s highest peak.

In fact, some of the chapters surprised me in the way they ventured off the pavement completely. In addition to recounting a high-road gravel ride, Leonard veers into the meadows and footpaths: for instance, there’s a whole chapter on shepherding culture (the transhumance ritual, wolf controversies) that I loved but imagine some roadie-readers finding perplexing. (Uh, where are the bikes?).

Leonard employs what is becoming his trademark approach to cycling writing: a winning combination of first-person reporting, research, race description, and travel writing, with an eclectic sprinkling of literary references. (I can’t think of too many cycling journalists who could interweave references to Fausto Coppi and Charly Gaul with ones to Aldo Leopold and Don DeLillo.) This can be a tricky balance to pull off over the course of a whole book, but Leonard, for the most part, pulls it off with aplomb.

The book is, not surprisingly, highly Eurocentric. The Alps and Pyrenees are its core, though there are passing mentions of mountains in Asia, Australia, and elsewhere. Certainly, Leonard could have written chapters about road cycling in say, Columbia or California, two mountainy places with rich cycling histories and traditions in literature and mythology (think John Muir meets Tom Ritchey). But Leonard’s focus is the Grand Tours, and even though these days more and more of the riders come from farther afield, it remains a fact that the three biggest bike races on the planet happen in Europe.

In terms of his exploration of cycling history, Leonard only goes back as far as the beginning of the Tour de France, for understandable reasons. But there’s a fascinating literature of mountain cycle-touring that goes back much further. Since the days of the high wheel, intrepid cyclists have been drawn to mountains–the most challenging but also most rewarding terrain. Indeed, Alpinism, the British-driven fascination with mountain climbing that sprang up in the Alps in the mid-nineteenth century, has numerous parallels with early cycling, as seen in works such as Elizabeth Robins Pennell’s classic Over the Alps on a Bicycle (1898) and as far back as Alfred Bolton’s Over the Pyrenees: A Cyclist’s Adventures (1883). But I’m not going to hassle Leonard for such omissions; one has to pick one’s spots.

As much as I admire Leonard’s chatty and digressive personal approach to writing about cycling, there are certain risks that come with it, moments when he overdoes it, sharing a bit too much, indulging in some stylistic excess. The candour that is a big part of what makes Leonard’s style endearing (such as his hilarious list of thoughts that pass through his head while cycling uphill) can, at times, also be a little cringy (like when he strains a Moby Dick allusion or describes his technique for eating a tomato).

But I’ll gladly put up with a few minor stylistic missteps in exchange for the much larger pleasures of the prose. Max Leonard is one of the best cycling storytellers operating these days and I look forward to seeing what he turns his attention to next.