It took me a while, but I finally figured out that the best time to take your gravel bike out to Cooking Lake-Blackfoot (CLB) is October. This provincial recreation area east of Edmonton and directly south of Elk Island has long featured plenty of intriguing roads and trails that, theoretically, should be of great interest to gravel cyclists. In particular, the east-west-running Central Alleyway Trail (CAT), essentially a gravel road that occasionally devolves into a dirt two-track in places, is, I would argue, one of the most scenic rides in this part of Alberta.

The problem, as any cyclist who’s been there will tell you, is the damn cows. CLB is also a grazing reserve, which means that during the summer, cows pretty much have the run of the place. On a July day, for instance, you’ll encounter cows in the fields, along the edges of the CAT, and often right in the middle of the road. Generally, cows flee at the sight or sound of cyclists, so that’s not the problem. Nor are the copious amounts of cow shit on the road really a problem, except for the most feces-averse among us. (Gotta keep your water bottle spout covered out there.)

The problem with cows, as far as the cyclist is concerned, is the mud trampling. Bovines make a big mess of the dirt surfaces after a rainfall. We’re talking hoof holes that are 3-5 inches deep, covering the entire road surface, usually for small stretches across low areas, though after particularly heavy rains I’ve seen vast cow-trampled secteurs. Once the stomped-on mud dries, it’s rock solid. 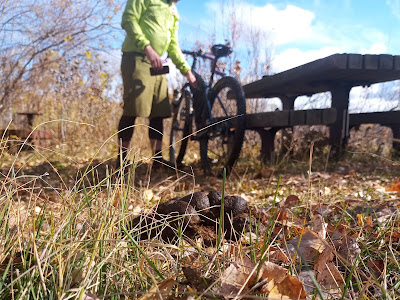 Without a full-suspension bike, you can’t really ride over this stuff. It’s ball-bruising, hike-a-bike territory. True, the stretches where it’s necessary to dismount and carry tend not to be long, but still, it’s kind of a drag.

But in the fall, the cows—well, most of them--go away, either to winter pasture areas or to A&W, and without cows, and with less moisture in general in the fall, cycling CLB becomes a totally different experience. There are still cow pies aplenty and some gates you have to open and close, and you do still see some cows this time of year, but the October ride is a vastly improved experience compared to my summer ride out there.

The benefits of fall riding at CLB also extend to the more adventurous trail sections, which are generally about as dry and packed in October as they ever get. The other day, we rode the Blackfoot trail that runs along the top of the park (making a loop with the CAT), and it was also in much better condition than it was in the summer. There are still a few unrideable hoof-stomped or underwater bits, but the trails are in much better condition than what I saw out there in July.

So go now, gravel cyclists, before the snow flies, and before the cows, inevitably, come home to Cooking Lake-Blackfoot. 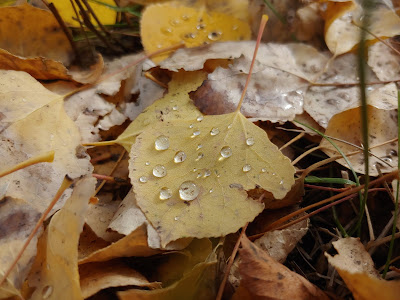