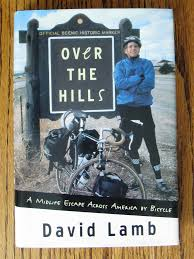 David Lamb’s Over the Hills: A Midlife Escape Across America by Bicycle (1996) is one of the better examples of the mid-life-crisis-bike-trip travel book that started to pop up in the 1980s and 90s and has become a subgenre all its own.

Lamb was the same age I am now (54) when he found himself not in a crisis exactly, but feeling “tiresomely reliable and responsible,” “normal to a fault,” he says. He hadn’t ridden a bike more than a few miles in decades, but he decided that a “foolhardy” cycling adventure from Virginia to California might just be the ticket to reconnecting with some of his roguish youth and getting out of a rut.

Lamb’s journalism background, which saw him report from Vietnam, the Middle East and other far flung outposts as he racked up Pulitzer nominations, serves him well on this venture: he’s got a keen observer’s eye and ear. The book is full of insightful observations about America, Americans, and cycling. Without a particularly vested interest in cycling beyond this trip, Lamb offers a refreshingly detached perspective. Why do so many beer-bottle-tossing rednecks hate cyclists? Could it be, Lamb suggests, that cyclists “are a symbol of frivolous idleness astride what is viewed as a child’s plaything”?

Many of his observations are perfect nuggets built for social media long before social media was born. At the end of his journey, for instance, he offers this pithy assessment that sounds like something you’d find on a clever Twitter account: “The bicycle is not the solution to the crisis posed by our romance with the automobile. But it’s part of the solution.”

Not surprisingly, Lamb eventually comes to see striking parallels between a cross-country ride and writing a book (something he had done four times): “You start from a position of intimidation, not a word written or a mile logged.” After many battles with doubt and failure “you wake one morning to know you are headed where you want to go and a rhythm sets in that carries you from one day to the next.”

Lamb offers the requisite amusing anecdotes about encounters with colorful characters en route: wise diner waitresses, whittling oldtimers, a drunk cyclist heading the wrong way in the desert. These human interactions are short and ephemeral but also revealing and true, the stuff of the solo traveller’s life.

One thing that sets this book apart from so many others of its ilk is the impressive amount of research Lamb’s done on bicycle history. Some may call it filler, but it’s really just good journalism. Lamb sprinkles tidbits of information about pioneering cycle travellers Thomas Stevens, Frank Lenz, and Fanny Workman, as well as brief histories of the Good Roads movement, the bicycle’s role in late nineteenth-century feminism, and the origins of the Adventure Cycling Association.

I wouldn’t call it a literary book, exactly, but Lamb does invoke the spirit of John Steinbeck a couple of times, referencing the classic heading-west novel The Grapes of Wrath, especially as he gets closer to California. But for me, the Steinbeckian echo is more the non-fiction classic Travels with Charley--just swap out the dog for a bike. Like Steinbeck 30 years before him, Lamb chronicles, in a quiet way, through small interactions, the shifting mood of a nation, where so many small towns carry “an air of vanished prosperity” and change--not necessarily the good kind--is in the wind.

Reading it now, the book, for me, has a nostalgic 90s vibe. Lamb travels with a 4 lb.(!) laptop computer in his pannier; he carries 14 paper roadmaps. Newspapers still mattered; journalism was a respectable and viable profession. You could get a decent motel room for $25. Lamb is utterly unselfconscious about smoking, and the food he eats en route is pure late-century middle-American coronary fuel: onion rings, milkshakes, banana cream pies. And he’s completely unembarrassed to tell us this.

There’s no great transformation on this journey; turns out Lamb isn’t really much of a rogue after all. He phones his wife every night and mostly keeps to himself, when not in journalist mode--as he says, he’s not used to being the protagonist of his stories.

But the book holds up because Lamb was a fine writer (he died in 2016) and the kind of thoughtful, easy-going American you’d probably smile and nod at if you saw him circa 1996, sitting in a small town diner, bike helmet on the chair next to him, eating a piece of pie, listening to a ballgame on the radio, smoking a cigarette, and jotting down some notes.