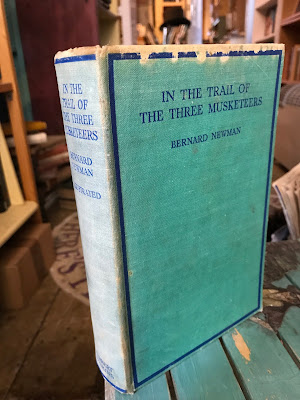 Then two things happened. First, I picked up, by chance, a book by the prolific British cycle-travel writer Bernard Newman, who in the 1930s, 40s, and 50s, published nine books about his bike trips around Europe. His first book, and the one I grabbed, is called In the Trail of the Three Musketeers (1934); it’s a classic literary pilgrimage in the tradition of Elizabeth Robins Pennell. Newman, like “countless millions of people,” grew up reading and loving Dumas’ books about the adventures of d’Artagnan, Athos, Porthos, and Aramis. So Newman sets out to “follow them yard by yard” across France, and he chooses the bicycle as his ideal means of transport: “it has the approximate speed of the horse [the Musketeers’ method of transportation], and is not so blatantly modern as a car; further, it can go almost anywhere.” Newman sees the bicycle as the perfect bridge between past and present. It allows him to trace old routes from before Napoleon’s roads were built, to take “forest rides or field tracks” and “go across country,” in an effort to stay true to the actual routes Dumas has his Musketeers take on their various adventures.

Newman is a charming and knowledgeable tour guide. He knows not just Dumas’s books and their source material, but also French history, and he sprinkles in references to other writers and critics French and English: Rabelais and Hugo, Thackeray and H.G. Wells. He’s also self-deprecating, in that classic English way. For instance, after confessing in the early pages that he hadn’t been on a bicycle in ten years, he promptly recounts falling off his bike on the first day--and into the Loire River! He also makes fun of his own facility with the French language and expresses faux outrage at the French proclivity for kissing in public. (Horror of horrors for an Englishman.)

But on my first attempt at reading this book, I was overwhelmed by the depth and detail of Musketeeriana. Newman had clearly not just read but absorbed these books, numerous times, and he talks about the characters and their adventures in such an intimate manner that I began to wonder if he had forgotten that these were, in fact, fictional characters--not real people. Such is the fanatical reader’s lot: the world in the books becomes more real the one outside them. Much as I enjoyed Newman’s easygoing manner and insightful observations, I also felt like an outsider taking in this insider’s journey. I was missing out, so I set the book aside.

The second thing that happened was a recommendation from a friend. In one of those exchanges of Netflix tips that seem to have become a regular talking point in COVID, she said that the BBC series Musketeers (which ran from 2014-2016) offered perfect pandemic distraction. My wife and I dove in, and, sure enough, it was. We loved it--the first two seasons anyway. For the first time, I started to understand the appeal of these characters and the world that Dumas builds around them. (I must admit that I don’t know exactly how faithful the BBC series is to the books, but from what I’ve read about it, the characters are true to form, if not the plotlines.) These names--Athos and Milady de Winter, D’Artagnan and Constance--were no longer just ciphers to me but old friends (and enemies), of a sort.

The series sent me back to Newman’s book with a new appreciation of the source material, and this time the book opened up for me. It sounds obvious, but that’s the thing about a literary pilgrimage: the reader needs to be able to relate to the fervour of the pilgrim. Watching the BBC series gave me just enough of that understanding, and I sailed through the book on my second attempt. I think any fan of Dumas’s books would probably enjoy at least parts of Newman’s.

I should add that In the Trail of the Three Musketeers, however, is about more than just paying homage to his “boyhood’s heroes.” In the middle section especially he keeps coming back to his “unhappy memories” of World War 1 and the time he spent in the very parts of France he is passing through on the trail of Athos and pals. In fact, the “old wounds” and the spectre of death haunts much of the book, despite Newman’s often playful and self-deprecating tone. At one point, he ponders “what d’Artagnan and the Musketeers would have thought of our war.” To his credit, though, Newman is aware of the dangers of forgetting his original mission, and despite all the cemeteries he passes, he keeps the focus on the Musketeers’ mostly happy adventures, not the tragic ones of his own generation.

Toward the end, though, there’s a sadness to Newman’s account. Dumas’s five books of Musketeer adventures ultimately trace the demise of his heroes, and as Newman writes of how and where each meets his end, it feels like Newman is bidding farewell to dear, old friends. The part about the death of Porthos, a “great generous creature” and Newman’s favorite Musketeer, is particularly poignant. How ironic, that fictional characters, who are, of course, immortal, can die and we can feel genuine loss at their fictional passing, despite the fact that we can just pick the book up again, turn to page one, and give old friends new life.