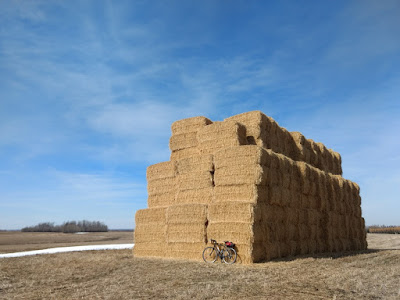 I miss riding with my friends. The conversation, the joking, the bullshitting--even riding silently together. I miss it all.

Alas, riding alone is how it’s going to be for a while. (I’m hopeful that the wide-openness of gravel will allow for two-person rides, but not everyone will be comfortable with that.) For the most part, my solo rides have been, well, okay. It’s something just to be out on the bike, moving through warm air again. But it’s not as much fun as riding with other humans.

My ride a few days ago, however, was an exception. I drove out to Strathcona County and explored some territory to the north and west of Elk Island Park. It was a warm, sunny day, not too breezy; the melt was on, with water coursing through the ditches and culverts, small torrents seeking out low ground. And part way through the ride something happened: I experienced some curious shift in how I saw the world from my saddle, and I actually enjoyed--for the first time in a long time--being alone out there.

Maybe the sinkhole had something to do with it. Heading north on a paved range road, early in my ride, I spied a truck parked across the road up ahead, completely blocking the way. Turns out a sinkhole about 4 feet across had opened up in the roadway above a culvert. The county maintenance guys let me through, and as I passed the gaping hole, I could see and hear the water rushing underneath it. After that point, as I continued along the now-closed road, I felt somehow free, let loose. Can a sinkhole actually be a good omen? 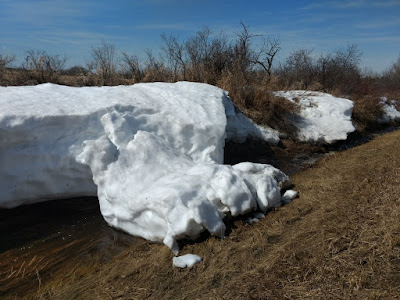 Shortly after, I ventured onto some new-to-me gravel and began feeling that small thrill that comes with heading into unfamiliar territory. And I started to notice things more sharply than before: soaring hawks, dilapidated barns, fields full of water, mini glaciers in the ditch. Even the profuse spring garbage had a brightness and crispness to it.

It was as if I’d somehow passed through the sinkhole into some other dimension where nature--but not just nature, everything around me--was crackling with some new vibrant energy. 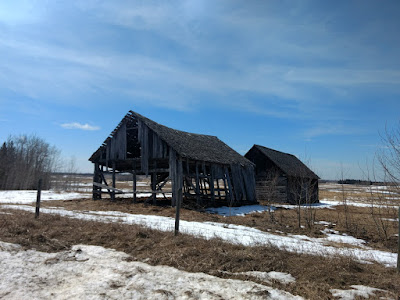 I’m not saying that I wouldn’t have noticed all those things if I’d been riding with someone else. But alone, I think you’re more available, more open to the world around you and that there’s a better chance of being completely alive to the magic of your surroundings.

On the home stretch of what had become a glorious solo spin, I stopped for a photo op at a massive tower of straw bales, a Minecraftian anomaly on the landscape. It’s right angles and immensity were startling and kind of beautiful.

Who needs riding companions, when the world is full of such wonders?