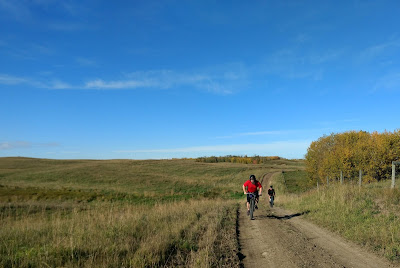 I almost don’t want to tell you this. I’m going to share a secret, my gravel-loving friends.

I recently discovered what is quite possibly the coolest gravel road in the greater Edmonton area. And what’s crazy about it is how it’s been right under my nose all this time and I only recently found it. I’ve been riding gravel in these parts for 8 years, and I thought I had a pretty good sense of most of the roads within an hour’s drive of the city. But this one somehow slipped through the cracks.

As many of you know, Cooking Lake-Blackfoot Recreational Area east of Sherwood Park and just south of Elk Island Provincial Park is a terrific network of cross-country ski trails--home of the Canadian Birkebeiner Ski Race, in fact. In the summer, these trails--mostly rolly, grassy double-track--are used by low-key mountain bikers. I’ve ridden them a few times myself.

But what I didn’t know until recently is that there’s a gravel road that runs a zig-zaggy east-west route right through the middle of the park, from the Waskehegan Staging Area to Range Road 192, with a couple of off-shoots, about 20 km all told. On the satellite map it looks like any other gravel township road, but on the park map it’s labelled as a ski route: Central Alleyway Trail or CAT (though in the route below the name changes a few times).

At both access points, there are gates. But the Waskhegan gate is meant only to stop vehicles; bicycles, horses, and people on foot are allowed to pass through or around. (The eastern gate, at RR 192, is a different story. That gate is locked and the fencing goes coast to coast, with signs making it clear that nobody, bikes included, will be going through. Judging by the signs, it looks like the road has become an oil and gas access point.)

The reason I didn’t know about his road, despite skiing many times at Cooking Lake over the years, is because CAT is designated a snow-machine route in the winter. Skiers can’t and don’t use it. With it being off limits in the winter, I hadn’t ever actually checked it out, winter or summer--until a few weeks ago.

There’s a couple things about it that make it a terrific find. First, the gates keep cars and trucks mostly off it, so although it looks like a road, it feels totally forgotten, a wide, abandoned trail in a preserve or protected but uninhabited wildlife area. The only people we saw on the CAT were a group of walkers near Waskhegan. The rest of the time it was only us and some cows.

Speaking of cows, they rule in this part of the park. In fact, the park appears to be active pasture land, divided up into sections. At one point we had to pass through an unlocked gate to continue on the gravel road. I know that sounds sketchy but it really isn’t. At this gate (unlike the eastern one), there are no signs forbidding passage; the fences appear to be there for cow-management purposes only. It’s clearly still part of the park.

In places, the cows also do a number (not to mention, many number two’s) on the road surface in places, creating a crazy quilt of hoof-print divots. Call it agricultural pave. As you travel from west to east, the road gets less gravelly and more trail like, as well as more hilly, at least until you reach the N.U.L. North line, where you can turn south and get back to something that better approximates gravel again--though that part feels even more like a road that time forgot. This is the second cool thing. 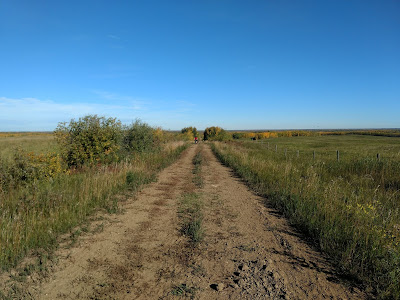 Although my map shows just the secret road, it could be incorporated into all kinds of loop routes in that general area. I'm cooking up a few schemes about this, which I will share another time.

Maybe everyone else knows about this road already and has been riding with the cows of Cooking Lake for years. But I suspect not.

Anyway, now you know. Some secrets are just too good to keep to yourself.