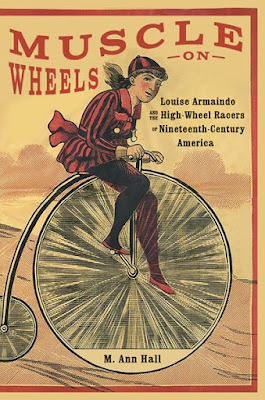 It’s a common claim of cycling historians that women didn’t ride the high-wheel bicycle, the so-called “ordinary” or “pennyfarthing” that was, hands down, the most popular bicycle from the mid 1870s to the late 1880s. The high wheel, so the story goes, required too much athleticism for women and was wholly incompatible with Victorian women’s fashion. So female cyclists rode tricycles until safety bicycles revolutionized the market in the late 1880s. High wheelers, so the theory goes, were the exclusive domain of men.

Edmonton author M. Ann Hall debunks that theory in her latest book, which tells the story of women who not only rode high wheel bicycles but raced them, often against men, more than holding their own. Muscle on Wheels: Louise Armaindo and the High-Wheel Racers of the Nineteenth Century (McGill-Queens UP, 2018) focuses on the exemplary racing career of one woman in particular, French Canadian Louise Brisbois, who competed under the name Louise Armaindo, and who was the first “highly successful woman high-wheel racer.” Armaindo was based in Chicago for a lot of that time and raced all around North America but especially in the midwest.

But the book is not just about Armaindo; rather its focus is a small community of women (and men) who, in the late nineteenth century, performed in various athletic competitions (mainly pedestrianism and cycling) on indoor tracks in front of sizable crowds in cities like Chicago and Minneapolis and New York.  It was both spectacle and legitimate athletic competition. Sporting entertainment promoters, such as Armaindo’s one time partner Tom Eck, set up the races and pocketed most of the money, while Armaindo and friends put on the show and took a small percentage.

The early chapters of Hall’s book describe a fascinating niche in the world of sporting entertainment in the late nineteenth century in America, one that straddles the borders of circus, burlesque, and sport. Women’s high wheel racing was, originally, a kind of offshoot from the popular sport of pedestrianism or race-walking in the 1870s. In fact, many of the women high-wheel racers, including Armaindo, started out as “pedestriennes” who participated in long-distance walking competitions on short indoor tracks.

Hall’s book reminds us just how much Americans loved to watch, and bet on, athletic contests involving men and women and sometimes even animals. (It was not uncommon for high wheel racers to compete against horses.) Bertha von Hillern, Mary Marshall, Elsa von Blumen, Exilda Lachapelle, Fannie Edwards, and others routinely race-walked hundreds of miles, often over the course of multiple days, and made a living doing it. When the high wheel bicycle became all the rage and crowds were willing to pay to see them raced, it was a no-brainer for some of these pedestriennes to make the leap up into the saddle.

The introduction to the book is a rousing polemic that takes some shots at sexist assumptions made by cycling historians such as Robert A. Smith and Margaret Guroff, who despite having seen images of these women racing the high wheel, ignored or dismissed their accomplishments. To some extent, this perception probably has to do with what female high-wheel racers wore--elaborate costumes, some of them racy, at least in that nineteenth-century way--which could give the impression that these women were merely entertainers. But one thing that Hall makes clear early on is that while Armaindo and others wore fancy outfits when they raced, it doesn’t mean they weren’t serious athletes. Their athletic achievements are impressive in any century.

In the mid 1880s, Armaindo was a star of this world, the “pre-eminent female racer in the United States,” Hall argues, and at the peak of her career, “in a class of her own.” In races between men and women, handicapping was common, with the women being given a head start. But Armaindo occasionally beat male competitors without any head start at all. She was that good. And she was a darling of the press. Newspapers gushed about Louise’s performances: “She is a marvellous woman, never seems to tire, and rides her machine as though it were mere play.”

The only problem with Armaindo’s story as the basis for a book is just how little information we have about her. A few surviving details are intriguing: her Quebecois mother was supposedly a circus strongwoman who was reported to have lifted 900 pounds dead weight. And Louise herself worked, in her youth, as a trapeze artist. But she didn’t keep a diary, that we know of, and no letters from her survive. So Hall has to rely on mostly newspaper accounts to try to piece together a portrait of Armaindo.

That's okay, though, as Hall fills out the book with the stories of other women who raced in the same circles, such as Elsa von Blumen and Jessie Oakes. The result is a book that is really as much about a community of women athletes as it is about Armaindo. And that may actually be a strength of the book. (I also have to mention that it’s full of remarkable illustrations of many of these women.) 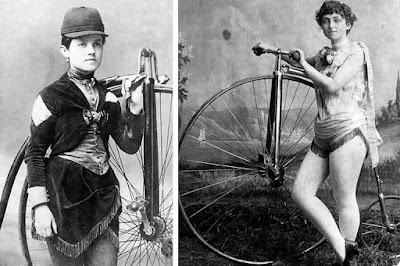 The final chapters aren’t quite as captivating as the early ones, only because Armaindo's story fades to the margins. We just don’t know very much about what happened to her. She didn’t adapt well to the transition from the high wheel to the safety bicycle, and as a new generation of female riders rose up, Armaindo’s body wore down.

Hall’s book makes a compelling case that the world of high wheel racing was not a boys-only club, as has previously been assumed. Women riders were both accomplished athletes and significant draws. But the world of race promotion, Hall makes clear, totally was a boys’ only club; late in her career, Armaindo, estranged from Tom Eck at that point, found it increasingly difficult to get into races. Her old connections, like her body, didn’t work the way they once did.

Hall’s book is a valuable and refreshing contribution to both sporting and cycling history. She admits that the number of women who raced the high wheel was small, perhaps 25 across North America. And that riding the high wheel was never a mainstream thing for women. But Hall convincingly argues that the accomplishments of this small group of women high wheel riders are worth remembering.