The Day After New Year's Day 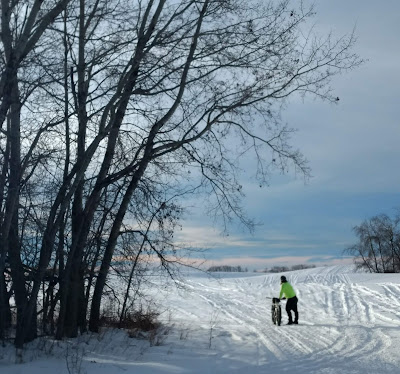 In New Zealand, January 2 is an official holiday known as Day After New Year’s Day. I know, it sounds like the title of a bad sequel to that climate-change disaster flick The Day After Tomorrow. But it’s a real thing, and, the more I think of it, a civilized concept. With hangovers and college bowl games out of the way, January 2 is the perfect time to go for the first bike ride of the year.


Speaking of climate change disasters, this winter has been the shits for cycling conditions around here. We’ve had a brutal string of freezing rain events that have made our roads, trails, even sidewalks almost impossible to ride on. This is the new climate-change reality, I’m afraid, and it’s making winter cycling a dodgy business. One really has to seize the moment and take advantage of the short windows of opportunity we get.

All of which makes our January 2 ride all the more special. It was a rare perfect day for winter riding, mild and sunny, with a light breeze, and the gravel roads west of Edmonton had just the right amount of packed snow. Val and Penn and I brought in the New Year with a leisurely loop that featured more dogs than cars.

I like this photo of Val taken at our turnaround point. He looks like he’s contemplating leaving even gravel roads behind and just riding off over the sunny field criss-crossed with snowmobile tracks. And that winter sky--both warm and cold at the same time. The sun was just about to head for the horizon, even though it was only mid afternoon.

The riding was so fabulous that even before we got back to the car, I was scheming ways to return the next day for another spin: The Day After the Day After?

But, of course, that night it rained again, wrecking the snow pack, covering the road in another layer of ice. The ride after the first ride of the year will have to wait.