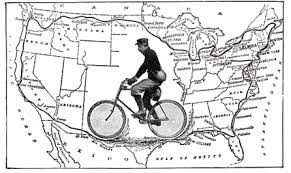 The 1890s was the Golden Age of long-distance bicycle-travel books. While Elizabeth Robins Pennell, Karl Kron, and Thomas Stevens proved the concept in the 1880s, it was the decade of the 90s, with the rise of the safety bicycle, that saw the phenomenon take off, as bicycle travel captured the mainstream imagination. Adventurer-authors such as Sachtleben and Allen, Annie Londonderry, Frank Lenz, Fanny Workman, and John Foster Fraser not only pedaled far and wide, they wrote compelling accounts of their travels, devoured by an audience hungry for glimpses of the world as seen from the saddle. One of the lesser known and underappreciated books from this vibrant period is American Tom Winder’s Famous Twenty Thousand Mile Ride (1895). I only heard of it thanks to Duncan Jamieson’s indispensable overview of the history of bicycle travel, The Self-Propelled Voyager: How the Cycle Revolutionized Travel. But I’d include Winder’s book in that list of Golden Age classics.


Most of these books begin with some lofty scheme or gimmick—across Siberia, around the world, America coast to coast—and Winder, a journalist from Warsaw, Indiana, came up with an original twist: he would ride not across but around (as in, the circumference) of the United States, following borders and coastlines, and do it in 300 days. He would start and finish in New Orleans, riding clockwise. As was the tradition at the time, he lined up some sponsors—Eclipse Bicycles, Hall Automatic Rubber Mud Guard, the Morse Roller Joint Chain--and secured a deal with a newspaper, in this case, the Buffalo Express, which would pay for regular reports as he went. (He wore a fetching Buffalo Express cap everywhere he rode.)

Winder’s book about his trip, Around the United States by Bicycle (1895), which came to be better known as Tom Winder’s Famous Twenty Thousand Mile Ride, is one of the more entertaining, if also sometimes disturbing, accounts from this period. Winder is something of a character—plainspoken, funny, optimistic, frank, and curious about “the great country that lay before me.” His voice has a folksy charm about it, as he offers playful anecdotes and insightful commentary. But . . . he’s also totally racist, in a way that was probably pretty common at the time, and parts of the book are hard to read without cringing.

However, most of that is in the second half of the book. The first half is charming. Winder has a way of making pithy generalizations about the places he visits--“I have only one objection to Fargo, N.D.,  . . . and that is the fearful mud”; “Nature has been lavish in its gifts to Portland [OR]”; “Nothing is too good for Buffalo.” In places, he writes with the cadence of a Mark Twainesque stand-up comic: “Getting out of Galveston was almost as hard as getting out of jail”; one visit to San Fransisco’s chaotic Chinatown is “an excuse for heart-failure.”

Winder’s colloquial expressions are wonderfully bizarre. For instance, he tells of how his rear tire “exploded with a noise like a fleshy lady falling through a garden trellis in gourd time.” Not sure what that means but it’s funny. His friend McCullough’s “face is a clam chowder dream.” At one point he meets a fellow with “a voice like a wagon of Roquefort cheese.”

There’s an element of the tall tale to parts of Winder’s style, and he occasionally indulges in hyperbole for comic effect. Describing a particularly steep uphill, he says, “The climb reminded me of a fly walking up a window pane.” In California, he describes running over a live snake which “got tangled up in the wheels and then around the pedals” and stayed there “for fully six miles before he got untangled.” Of course it did.

Like some drunk poet, Winder indulges in goofy wordplay, like this alliterative alphabetical aggregate: “I have wheeled entirely across Southern California, the land of pilgrim padres, plodding peons, and perfect ‘poesy;’ of rare romance, rich roses and and rocky recesses, of snowy summits, silvery seas and sweet songs.” Thankfully, he doesn’t keep going through the rest of the alphabet.

One of the things I like about Winder is how much he talks about food, or “eatables,” to use his term. Anyone who’s ever done a bike trip of any kind knows how important food becomes—how eating is a means of measuring out a day. In some cases, food can even become a cycle-tourist’s obsession; failure to find food can destroy a cyclist’s spirits and the unexpected appearance of decent place to eat can bring outsized joy. I tend to agree with his claim that “two hungry cyclists in a country hotel are more destructive than the traditional bull in a china shop.”

In Winder’s case, he travelled ultra-light, carrying few supplies, relying for his sustenance on the fare offered in “section houses” and local hospitality. Generally, this approach worked, but on occasion he had long stretches with nothing to eat and he talks frankly about experiencing alarming hunger. (He claims to have had a rule against knocking on farm-house doors and asking for food, but a few times he had to break that rule out of necessity and take whatever was offered, be it “corn bread, hard as a brick” or meat that had gone off.) Some of the “eatables” he gets most excited about are cheese and crackers in Oregon and raisins in Pasco, Washington. He swoons over ice cream on a hot day in North Dakota; one desperate day in Alabama, he eats two of his coat buttons (“they did not seem to do much good”). 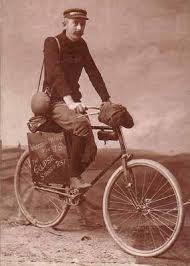 In South Carolina one day, finding himself in a food desert, Winder was surprised to find a package tossed at him off a passing train; he picked it up and saw his name written on it; it was a parcel of “eatables” from two travelers he’d met earlier in Charleston, who knew of Winder’s route along the railway. The package contained “Four ham sandwiches, four fried cakes, two slices of cake and an orange.” “Like manna from heaven,” Winder exclaims.

Another thing I like about Winder is how he writes, quite vividly, about the experience of riding a bicycle over long distances. Surprisingly, not all of these Golden Age cyclist-writers do. (Fanny Workman, for instance, almost never mentions the fact that she’s on a bicycle.) Walking his bike through mud or sand and stopping to fix flat tires leads him to be philosophical: “The wheelman is born to disappointment.” He writes of the times when the “wheeling is simply splendid” and other times when it most definitely is not: “I cannot say I’m having vast quantities of ‘fun’ on this bicycle ride.” Occasional company lifts his spirits, but then long nights alone make him lonely and reflective of this “queer life of mine.”

The only problem with Winder’s otherwise entertaining book—and it’s a big one—is the racism. When the book was written, the use of terms like “dirty Indian,” “darky,” and even “nigger” were common parlance in much of America, but now, of course, such terms are highly disturbing. This becomes especially problematic as Winder recounts his travels in the American south. He makes several racist generalizations (for instance, he says negroes are lazy and notoriously “great cowards,” superstitious to a fault).

But compared to some of the white men he encounters in the south, Winder sounds like Abe Lincoln on wheels. Winder reports casually racist remarks he heard from people he met (“I don’t believe in educated niggers. When he is educated he is no good,” says a section boss), and these are not for the faint of heart. Winder himself doesn’t say where he stands on the “negro question,” though you get the sense that he finds the section boss’s attitude extreme. Just when you think Winder might be seeing the light, he accuses negroes of being thieves. “That’s their failing. A southern negro will take what does not belong to him if it is lying around loose to offer him the temptation.” Which makes it pretty ironic when, on the next page, Winder himself steals food. He describes being in a remote area outside Savannah, S.C., starving and thirsty, when he chances upon a railroad handcar belonging to an absent section gang. He spies their lunch buckets. “I went through the five buckets taking the best from each.” Winder leaves a half dollar and a note, but it’s hard to imagine the section men eating his coin or seeing his actions as anything but theft.

At the end of Winder’s account, his journey complete, he says he’s going back to being a “plain ordinary every-day citizen,” but there’s an twinge of sadness in his voice, familiar to anyone who’s taken a long journey. The book includes two additional brief accounts of subsequent shorter bicycle trips Winder took, and you get the sense that he was seeking, without much luck, to reproduce the pleasure and fame of his initial adventure. Once you’ve been famous, it’s hard to go back to being ordinary.