The description on bikepacking.com says the trip is “easily attainable by most people,” a mere four out of ten on their scale of difficulty. The guys who wrote the piece did the trip in four days, and the pics on the website make it seem awful leisurely—dudes taking photos of caterpillars and stopping to fish for trout in streams. So, we decided to do the trip in three days. It’s only 100 miles, right? How hard could that be?

We followed the route on bikekpacking.com, starting in Elkwater, on the Alberta side, and heading east, camping at the rustic Westblock campground just over the Saskatchewan border. Day two, we left our tents up and rode without gear further east to what is, somewhat confusingly, called the Centre Block, and then back to Westblock. Day three we headed back to Elkwater via the southern Graburn Gap Road. So days one and three were half days of riding (allowing for driving time), and day two was a long one. A really long one.

The first 18 km from Elkwater are on trails, a combination of double and single track, much of it in the enchanting Spruce Coulee. On a full-suspension mountain bike, this trail would be easy-peasy, but on a fully loaded fat bike, without shocks, it was tough at times—some steep inclines and lots of rooty business. I admit, there was some walking. 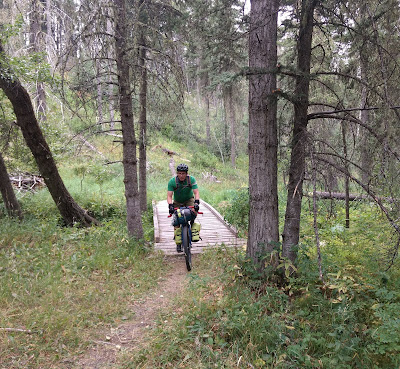 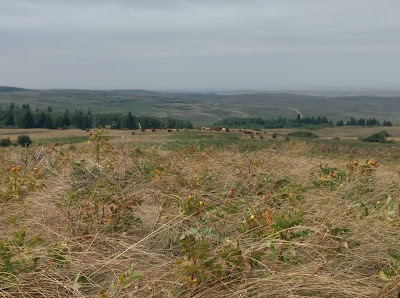 After the Spruce Coulee Campground, the terrain shifts from forest to high meadow and rolling, grassy hills, offering stunning views. Cows are everywhere, and it doesn’t take long to become resigned to the inevitability of cow shit--on your tires, your frame, yourself. After the steep descent to Reesor Lake, it’s regular gravel roads, punctuated by Texas Gates and cow pies, well past the Saskatchewan border.

Cypress is lousy with plaques recounting the history of this area, especially in the 1870s, when tensions between American wolf hunters, Canadian whiskey traders, and local Assiniboine and Metis groups erupted in what’s known as the Cypress Hills Massacre of 1873. (Over 20 Assiniboine and one wolfer died). This tragic event is partly responsible for the creation of the North-West Mounted Police, the force sent to quell the lawlessness of this area. (Fort Walsh, a national historic site about 5 km off our route, tells the full story.) For our purposes, the plaques offered a good excuse to stop, get some knowledge, and catch our breath.

It was only 38 km to get to the Westblock Campground that first day, but it felt way longer, as half of those are mountain-bike kilometers.

Westblock is rustic—no water, no electricity—but in a good way: lovely, quiet, well maintained, with level tent platforms, and, most importantly, it was almost deserted the days we stayed there. We claimed a walk-in site and had the whole area to ourselves. If you don’t count the cows, that is. They roam freely in the campground, and it took me a while to get used the sound of them chewing outside my tent at night.

The second day was ambitious. To get over to Centre Block, we’d take the infamous Gap Road, a clay/dirt/gravel route over high prairie. We knew it was closed to motorized traffic because of the fire ban, but bicycles were permitted.  (At least that’s what one park official told us. Two others weren’t so sure.) The Gap Road is super hard riding, with tons of up and down and some seriously sketchy road conditions (we’re talking patches of fist-sized rocks), but the scenery up there is spectacular. (The late-summer smoke compromised the vista, but it was impressive none the less.)  No powerlines, no human sounds, just endless stunning views, the occasional pronghorn or deer, and thousands of cows used to having the full run of the road. The place feels old, barely changed by humans. 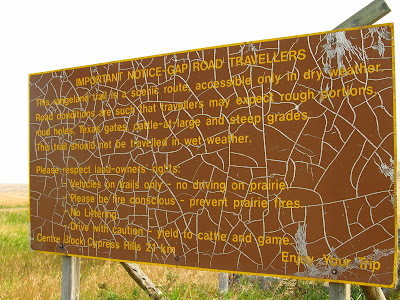 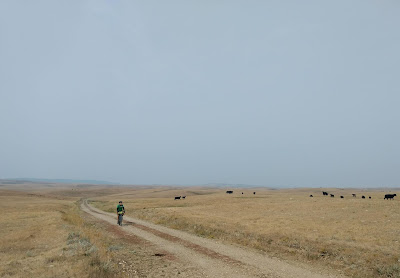 (In case you’re wondering what we were riding, I can tell you that I didn’t regret bringing my fatty on this trip. Sure, it was heavy on the uphills, but the traction was well worth the weight trade off. Penn, on his trusty Fargo, however, wished at times that he had a bit more bike for the job. Val’s ECR, with its 3-inch tires, was the best-suited tool for this adventure.)

By the time we got to Centre Block, which is the most touristy, some might even say cheesy, part of the Cypress Hills, we were pretty shattered. A leisurely meal at the Café, some soft serve ice cream, and a re-supply at the General Store barely recharged our batteries. It was going to be a long slog back.

But then our luck started to change. We glimpsed a moose in the trees, always a joyful occurrence. And then we stumbled on to the Trans Canada Trail, which turned out to be a charming exit route, away from the pseudo-outdoorsy weekenders of Centre Block, taking us through forest and field back to the Gap Road. It was on this stretch of trail that we saw the first cyclists of our trip, a couple on mountain bikes, out for a day ride from Centre Block. Our spirits began to perk up.

The return journey over the Gap Road became a race against the sun and her allies the wind and smoke. We were beyond bagged, but pushed on, making it back to Westblock and its envoy of cows just before dark. That day was no 4 out of 10. Not for us, anyway. As we sat around our fireless campfire (thanks, fire ban), our bodies hummed with fatigue. Even cans of Saskatchewan’s unofficial nectar (Pilsner) couldn’t revive us.

Day three we headed west, into the wind, and ended up on another high, desolate gap road, this one called Graburn, named after North-West Mounted Police Constable Marmaduke Graburn, who, in 1879, was the first Mountie to be murdered. (We saw a small memorial to Graburn on day one just before the Saskatchewan border.) This gap road was another stunner—wide open, barren, desolate but for the occasional stunted tree yet strangely beautiful. We encountered a few trucks up there, and one fellow cyclist (who had also read about this route on bikepacking.com), but the most remarkable feature of that area has to be its utter remoteness.

Heading back into Elkwater, we took a pass on the Horseshoe Canyon Trail, opting instead for the Ferguson Hill Road; a freshly paved downhill bomb was irresistible.

I don’t know that I’d recommend doing this trip in late August, like we did. The smoke was brutal and the fire ban perverse, given how cold the evenings got. (And it seems that August is now going to be fire season.) We tried to warm ourselves with scotch, but that only worked to a point. The perfect time to come here is June. Everything is green, the days are long and warm (but not too hot), and the tourists and fires haven’t arrived yet.

Cypress Hills is a terrific bikepacking route, thoughtfully put together. It should be on every western gravel rider’s sprocket list. But just know that if you do it in three days, the middle one is probably going to be hard, and you’ll want to do your trout fishing, caterpillar watching, and general gamboling on the first and third days.