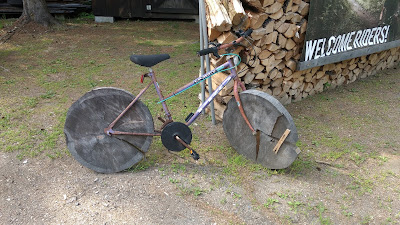 I spent all of about 16 hours—and half of that asleep—in the small mountain village of East Burke in the Northeast Kingdom region of Vermont. But the place felt familiar and comfortable right away. I liked it immediately and I can imagine returning there some day for a longer, more leisurely explore.


East Burke is a classic mountain biking and skiing town, with only a few hundred permanent residents and tons of tourists. Apparently, the Kingdom mountain bike trails are famous in the mountain-biking world, a kind of Appalachian Moab (though I’d never heard of them, which tells you how little I know about that world). The vibe is a curious mixture of outdoorsy-hipster-lumberjack-artist chic and backwards-ball-cap-wearing bros on high-end mountain-bikes. 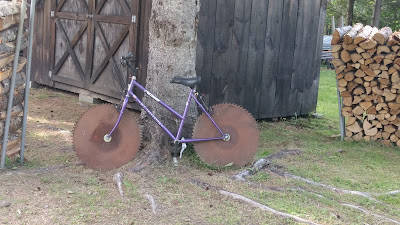 At the entrance to the town, some guy has built a series of lumberjack-bicycle sculptures which pretty much say it all. One’s got rusty saw blades for wheels; another has discs cut from a tree truck for wheels. They’re quirky monuments of weirdness and worship.

Cycling appears to be a kind of religion in East Burke, and bicycles religious icons, but the sect is clearly of the mountain denomination. Our accommodation, The Village Inn, had a bike washing area, free laundry facilities, and a bike storage room that was nicer than some of the actual hotel rooms we stayed at. But ours were the only touring bikes in that completely full room. We felt welcome there, but with our skinny tires, we couldn’t help but feel not entirely accepted by the believers. We were envoys from a dissenting branch of faith, tolerated certainly but on the margins.

If I do go back to the Kingdom of East Burke one day, I think it will have to be with fatter tires, and maybe even a beard, ball cap, and lumberjacket to boot. 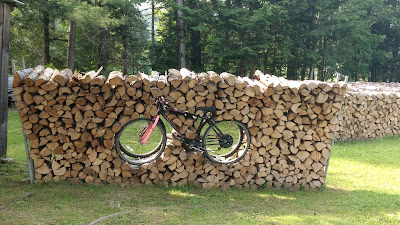