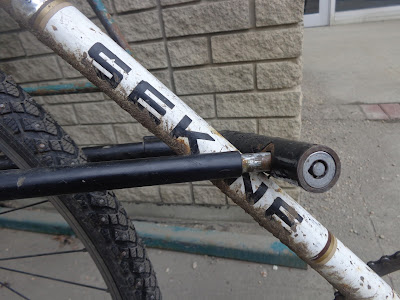 I park beside this crappy bike almost every work day. I have no idea who owns it. But I have grown quite fond of it.

For one thing, it’s a Sekine (pronunciation: rhymes with "zucchini"), which gives it instant street cred. Although I remember seeing Sekine ten speeds in my youth, I didn't know the Sekine story until one of my Manitoba relations explained that Sekine bikes were made in the tiny town of Rivers, Manitoba, northwest of Brandon in the 1970s and early ‘80s.


As I learned recently on one of several Sekine devotee websites, this was an era of high tariffs on bicycles coming to Canada, so a handful of foreign producers, including Raleigh, Peugeot, and the a handful of Japanese manufacturers including Sekine, opened Canadian assembly plants (though most of the parts still came from elsewhere), thus getting around the 25% import tax. The Sekine operation was unique in that it was a joint venture between the Japanese and Canadian governments together with local First Nations, who provided most of the labour at the Rivers plant, in an old military base.

In its heyday, the factory in Rivers churned out 50 000 bikes a year. Back in the golden age of the ten-speed, Sekines were a common sight in bike racks at Canadian schools. Today they’re less common but seem to have a cult following, of sorts, on the web. Well-preserved vintage models can fetch a tidy sum among the Sekine weenie set.

Aside from the Sekine factor, this particular bike has something else going on. At first glance, it might be mistaken for some homeless dude’s shitbox beater bike, with all that rust, flaking paint, and only dregs of handlebar tape. 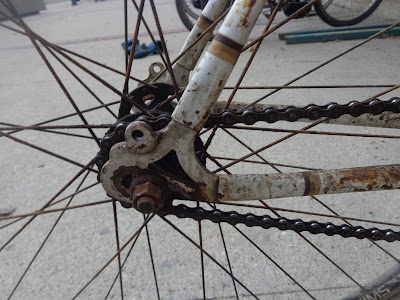 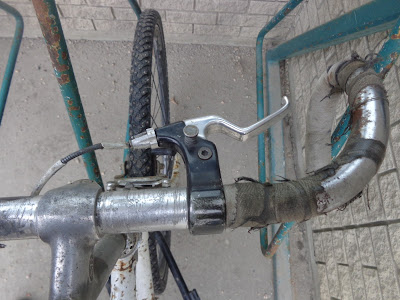 But on closer examination, I see a carefully cultivated hipster functionality. This former ten speed’s been converted to a fixed gear (hipster bonus points); there’s an improvised squeezy front brake (loss of hipster bonus points); the tires are excellent Schwalbes (bonus middle-aged commuter points), and the chain is well lubed, which is saying something at this time of year when most cassettes are sprouting an orange fungi of rust. This bike has, despite first impressions, received some love. It is, in fact, a piece of meticulously curated shitbox chic. 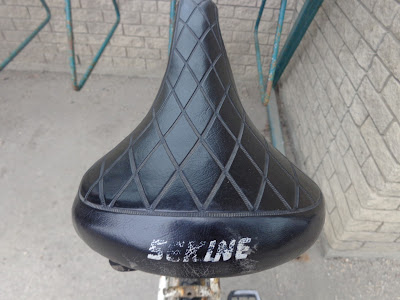 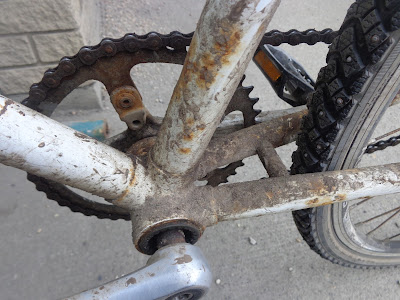 Not that it’s actually valuable. Sekine nerds will, indeed, pay big bucks for mint condition vintage Sekines, especially if they possess the much-prized ornate/cheesy Sekine headbadge complete with a single rhinestone and/or an elaborate, stenciled Sekine rear spoke protector, found on select early models. My Sekine neighbor has neither—at least not anymore.  I doubt the rest of the bike is worth as much as its two Schwalbes. 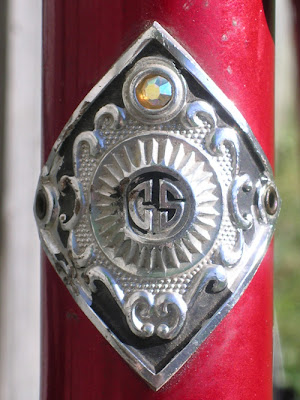 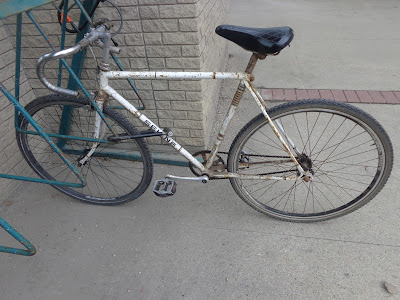 But I'll take my shitty Sekine neighbour over those pampered and polished slick Sekines on the internet. It may not have a rhinestone, but it's still got sparkle.