McLaren Regional Park, in southwestern Saskatchewan, about 100 km northeast of Medicine Hat, is my kind of place: quiet, mostly forgotten, a bit rough around the edges but recently loved and emanating some positive 1970s vibes. The day we pulled in there last June, near the end of our Rural Alberta Adventure (okay, so it wasn't purely Albertan), the place was empty, not a single other camper in sight (or on sites, for that matter). Right away, I had a good feeling about McLaren Lake. 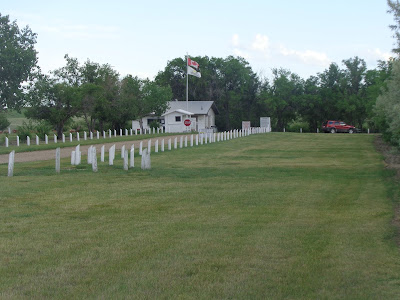 We were greeted by Betty, one half of the retired couple that now runs the campground. She was busy, painting a shed, I think, but she told us to take our pick of camp sites and feel free to drop by the old concession stand for a burger when we were set up. Turns out Betty and Bev took over a run down park a few years back, but they'd quickly whipped the joint into shape, with a few cans of paint, tons of elbow grease, and a healthy dose of TLC. All the buildings were old, from the 70s, I'd guess, but freshly painted and immaculately kept. The playground, with its colorful monkey bars and metal slides, could have been an art installation inspired by my childhood. The 9-hole sand-green golf course, however, was mostly pasture, though Bev had rehabilitated one of the greens as an experiment. He's got plans for the rest of it. 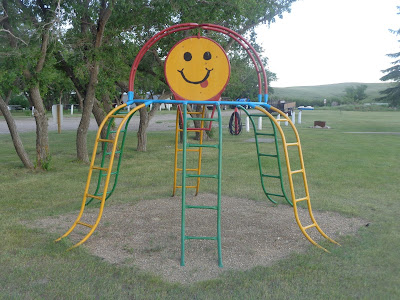 I’ve always had a soft spot for Saskatchewan’s Regional Park system. Most of its parks were created in the 1960s and 70s, and back then, I imagine they were the cat’s meow: the ones I’ve visited tend to be vast chunks of land, far away from major highways (often on gravel access roads), and featuring a range of rustic recreational services, often including sand-green golf courses, swimming holes (not pools but ponds), old-timey concession stands, and expansive, if basic, campgrounds. When funding for these parks dried up in the early 1990s, many of them fell into disrepair. Actually, that’s putting it mildly. Such is the frozen-in-time feeling at many of these parks that they feel like park-museum hybrids. 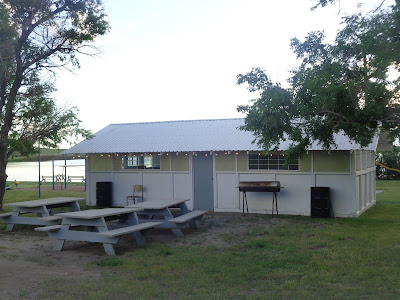 Not surprisingly, these regional parks are no longer popular. (The guy at the restaurant in Burstall, down the highway, made a funny face when I said we were camping at McLaren. Why there? his expression seemed to say.) The provincial and national park systems get the hype and the dollars (the few that are available at all anymore), while the surviving regional parks of Saskatchewan are now run as non-profits, relying heavily on volunteers. But many of the parks, like McLaren Lake, retain a 70s quaintness, a certain out-of-fashion charm, that some old-school campers, like yours truly, kinda love. These parks, now distinctly uncool, are remote, rustic, and inexpensive.

Betty invited us into the kitchen for a visit while she grilled up dinner and we gabbed for over an hour about how she and her husband ended up running the park (they're snowbirds from nearby, and the park is great way to spend the non-Arizona season), bikes and bike travel, and the local flora and fauna. We shared stories of pronghorn sightings. Betty recommended we go visit the family of owls over beside what's left of the third hole. And she proudly proclaimed that the lake had resident mudpuppies. Say- what-puppies, we asked? "Big salamanders. They're dinosaurs, actually," she grinned. "Some fellows from the university came here last summer to study the mudpuppies. They're not supposed to be able to live around here. But they do." 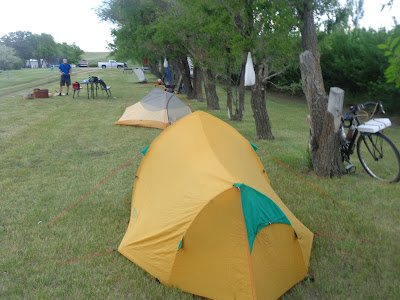 Post-burgers, we built a fire out of wood we carted to our site in a wheelbarrow that was made well before Diefenbaker left the farm. As we watched the stars emerge and listened to the clippety-clop of  an old windmill on the farm across the road, we tried to imagine what the park must have been like back in 1975, when the ball diamond was new, the concession stand buzzing, and the "beach" the place for locals to hang out on a Saturday afternoon in July. 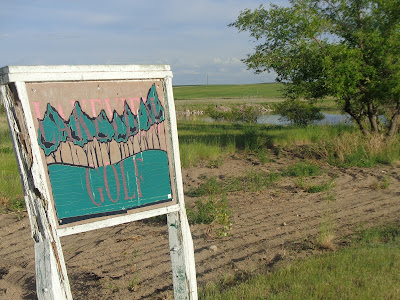 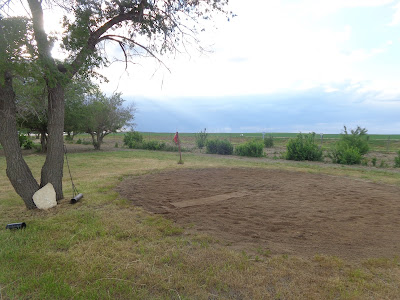 That night I dreamt of mudpuppies--or at least what I thought were mudpuppies, given Betty's vague and mysterious description. In the dream I got up in the night to walk to the bathroom and ended up following the lakeshore, where I heard the slippery salamanders slapping about in the weeds. 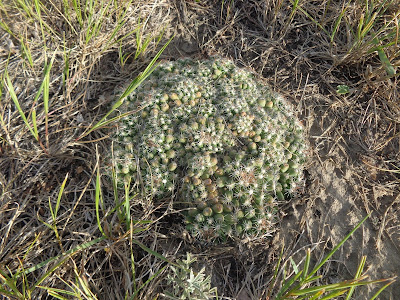 In the morning, we ate pancakes with Betty and Bev and couple of their friends who stopped by for a visit. More tales of the elusive McLaren mudpuppies were spun, and far too much coffee was drunk. When we finally rolled out of the place, past the freshly painted flag pole and the golf course speckled with cacti and gopher holes, I thought about how, as the last ice age retreated from the prairies, and the mastodons and sabretooths left with the ice, at least a few holdovers decided to stay put. I can see why the mudpuppies stuck around.