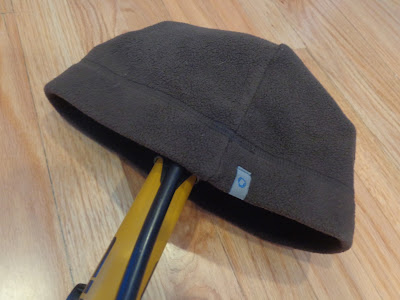 Winter cyclists know that dressing for success, if not survival, means protecting the extremities, those most valuable digity bits, with high-quality gear like serious boots and full-on mitts. In fact, there’s a wide range of (very expensive) footwear and hand wear marketed to winter athletes and sportsmen and women, from cyclists and snowmobilers to ice-fishers and skiers. You can spend a lot of money on these items; and, in many cases, it’s worth doing so.

But what of protecting that most valuable extremity of all (at least, for dudes)? How is the winter cyclist or sportsman supposed to keep his willy warm on frigid days? Winter folk of all kinds have long had to deal with this problem. It’s said, for instance, that Norwegian scouts of the twelfth century embarked on days-long journeys through blizzards and drifts, protecting their family jewels with ptarmigan carcasses stuffed down the front of their breeches.

These days, alas, the winter-clothing industry hasn’t moved much beyond the ptarmigan method. I know of only a few commercial options available. Not surprisingly, however, resourceful winter athletes have invented their own ways of protecting their central extremity. Herewith follows a guide to some of the most common methods of keeping one’s unit from freezing off whilst awheel in the winter.


A handful of mostly European sport-clothing makers has marketed supposedly windproof underwear and tights, originally aimed at the cross-country skiing crowd, in particular; these are reinforced with a Kevlar windproof panel in the front. I’ve never tried these myself, but the consensus among online reviewers is that the windproof models work fine for winter cycling--but they are pricey. You’ll pay a premium for that little package panel.

It’s not surprising, then, that some more frugal winter cyclists will opt for any number of less expensive, often-DIY approaches. One such solution is strategic layering. Wearing an extra pair of shorts, for instance, either over or under your pants, can provide that extra bit of localized protection without sacrificing too much overall flexibility or risking more generalized overheating.

Some, however, will find the layering approach cumbersome. The area that needs extra coverage is very localized, usually just a napkin-sized area in the front. The all-around coverage of a pair of shorts can be overkill and may even restrict movement. So some guys, in true DIY spirit, prefer to make their own windproof shorts/pants by reinforcing the key groinal region with a few strategically placed strips of duct tape (on the tights, that is, usually inside) or—my favorite and certainly the classiest—a scrunched up Safeway bag. Some swear by the plastic bag’s lightweight windproofing qualities. Plus it has the added bonus of crinkling when you move.

Another traditional method, in some parts, is a sock stuffed down one’s underwear or riding tights. While there is something elegant about the simplicity of this approach, in my experience the sock sounds better in theory than it works in actual practice. True, a sock seems the right shape for the job, but really it isn’t. Unless it’s being worn, so to speak, a sock tends to move around too easily, slipping off to one side or the other, compromising its effectiveness and giving the appearance of a ghastly groinal tumor.

My personal favorite is what Val calls the “junk hat”—an old toque that I have retired from active head-wear-use and now employ exclusively for this one purpose. You want a smallish toque for this, ideally, not a slouchy and certainly not a pom-pom model. Kids’ hats are just about the right size, if you’re okay with that.  In a pinch, a yarmulke would do, I suppose. The package-toque covers just the area that needs covering and stays more or less in place, so long as it is placed directly against the skin. Don’t try to stuff it between layers. A junk hat has got to be all up in there if it’s to work properly. Position it just right and the JH will keep you cozy and comfortable and not make you feel self-conscious (or make others look askance as you’re sashaying through the Starbucks apres ride).

Winter cyclists must take precautions. So find or make your own junk hat, whether it be out of toque or ptarmigan—whatever works to keep you and your boys warm and safe until spring.
Posted by Jasper Gates at 8:00 AM