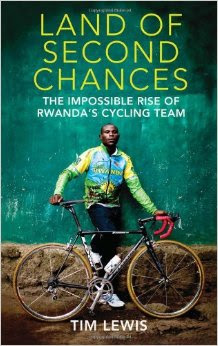 When I picked up Tim Lewis’s The Land of Second Chances: The Impossible Rise of Rwanda’s Cycling Team (Velo, 2013) back in July, the timing was perfect. Lewis’s book about an African cycling story and the evolution of professional cycling in that continent suddenly seemed prophetic.


The genius of this book is the interweaving of three disparate storylines, all intersecting in Rwanda and all variations on the theme of second chances. First, that of Rwandan cyclist Adrien Niyonshuti and his unlikely and remarkable journey from genocide survivor in a land of few bicycles to Olympic and professional rider. Second, that of Tom Ritchey, American mountain bike innovator and legend who, while experiencing something of a mid-life crisis, finds himself visiting Rwanda’s le pays des mille (land of a thousand hills) and launching a series of cycling endeavors in that country, including bankrolling a cycling team. And third, Jock Boyer, an eccentric former pro cyclist, the first American to race the Tour de France, who despite a disturbing post-cycling life that saw him briefly in prison, ends up becoming the coach of that Rwandan cycling team.

The early chapters of the book are compelling. Lewis sketches the horrors of the 1994 genocide and its aftermath, ingeniously weaving a cycling thread through the telling in a way that feels original and entirely appropriate. It’s not an easy story to tell, but Lewis pulls it off. He also offers a fascinating history of cycling in Africa (a spin off of colonialism), generally, and Rwanda, in particular, complete with accounts of early rubber plantations (to feed the European demand for tires), wooden-bicycle races, and all manner of ingenious, free-lanced cycling rigs, from bicycle taxis to seatless scooters.

Ritchey’s life story and ventures in Rwanda are intriguing too. He goes there without knowing a thing about the place but finds a surprising kindred-spiritual connection between the DIY approach of under-resourced Rwandan cyclists and mechanics and his own early days when he introduced a similar can-do, creativity to bicycle construction. Thus is born Project Rwanda, Ritchey’s ambitious plan to build special cargo bicycles specifically for Rwandan coffee growers. Ritchey, who considers himself a “dot connector,” establishes a link with Starbucks to help fund the scheme. And as an offshoot of the Project, Ritchey creates a cycling development program, Team Rwanda.

Boyer is hired to coach of that team, and his story is full of demons of a different kind.  After retiring from cycling, Boyer got himself in trouble by getting into a romantic relationship with a 12-year-old girl. That’s what got him sent to jail. Lewis remains remarkably detached about all this. He tells us Boyer admitted to his mistake and has tried to move on, though, of course, for lots of people, Boyer will forever be defined by this one transgression.  Lewis seems to feel sympathy for Boyer, and his treatment in the book emphasizes Lewis’s implied position that no matter how repulsive one’s transgression, whether murdering your neighbor or abusing a child, forgiveness is the most difficult yet most human of endeavors.

While I respect Lewis’s decision not explore the nefarious details of Boyer’s crime, I did find his reticence on this matter a bit baffling. Not that I really want to hear about what Boyer got up to. It’s just that if the genocide has taught us anything, it’s that part of redemption and forgiveness is coming clean. But Lewis seems so determined to take the high road with Boyer that it feels like he has left something important out of the book. This is especially striking given that, at other moments, Lewis includes gratuitous salacious details for no good reason I can see, such as when he describes gorilla researcher Dian Fossey’s encounter with naked Rwandan pygmies. Really? That makes it in but Boyer’s specific crimes don’t?

Perhaps because of that, Boyer remains sort of flat, somehow not fully realized in the narrative. And that’s when the book starts to wobble a bit for me. The Ritchey storyline, too, disappears for a long stretch in the middle, only to reappear with an anticlimactic chapter on the pitfalls of Project Rwanda. Only two stars shine throughout the book: Adrien Niyonshuti and Rwanda itself, both of them resilient, determined, complicated heroes.

In the final chapters, as if sensing that his grand narrative is failing, Lewis turns his attention to what he calls the Africanization of cycling. This is the theory, popular in some circles in recent years, that what happened to distance running in the 1960s and 70s—almost complete domination by African runners—is also going to happen to cycling, has already begun to happen, in fact. Proponents of this theory say that the qualities that make Kenyans and Ethiopians such good marathoners also make them excellent cyclists, and it’s just a matter of time before these athletes make the transition from spikes to spokes. That with the rights training and support, African cyclists will one day come to dominate events like the Tour de France. If this year’s results are any indication, that day may come sooner rather than later.

Despite the problems with the second half, this book is still well worth reading for its fresh and original perspective on professional cycling. It’s so easy to be cynical about much of what happens in the UCI, but the story of Adrien Niyonshuti and his country will have even the most hardened cycling fan rooting for him and for Rwanda.
Posted by Jasper Gates at 2:00 PM