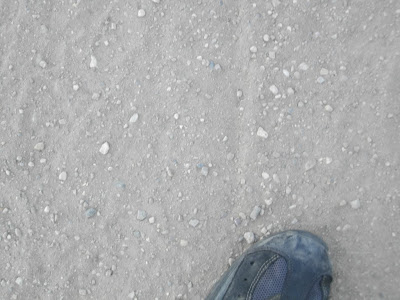 I call this stuff Manitoba White, a kind of pale, chalky gravel common in southern Manitoba, where I visit each summer. I’m guessing it consists of some kind of post-glacial limestone mixed with a dash of petrified Mososaur bones. (You can’t hardly stick a shovel in the ground there without hitting dinosaur detritus.) I`m adding this one to the Gravel Glossary, likely the first of a bunch of regional gravels.

Regardless of what it's made of, I can tell you this stuff is soft, almost powdery, and dusty as all get out. After a week of riding these white gravel roads, my bike—not to mention its rider—was covered in a film of white-grey dust, like a Mount. St. Helens bystander. 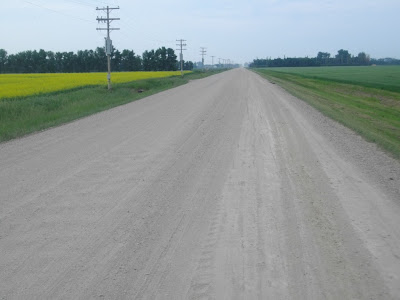 The best feature of this gravel, though, has to be the startling contrast it affords, set against the green and yellow fields tucked under a prairie sky.

Poor Manitoba, my father-in-law says, can`t afford much these days, and that means few paved roads aside from cities and major routes. Therefore, gravel abounds there. So much the better, I say.
Posted by Jasper Gates at 10:35 PM