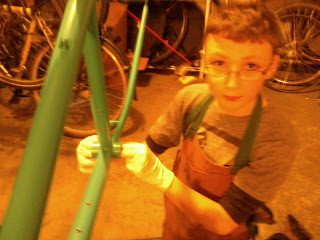 Building a bicycle with a 12-year-old is full of surprises. Whereas an adult might see the job as a series of orderly (and in my case, mildly daunting) tasks, the 12-year-old sees it primarily as a chance to do fun things with tools in the garage. On a recent afternoon in Val’s shop, these included . . .


Hammering: Despite Val’s sage advice—“A hammer is almost never the right tool when working on your bike”—one of the first things young Gil found himself doing was standing on a stool, mallet in hand, whacking the bejeezus out of a tube placed over the crown race of the headset. As Val explained, the crown race is held in place only by friction, so it needs to be pounded onto that head tube in a serious way. Gil whaled away like a mini-Thor, and then, pooped out by the effort, passed along the mallet so Val and I could get in on the fun too.

Wiping: Who knew that smearing some lube on one’s latexed finger and wiping it into the head tube and bottom bracket could be so much fun? Gil took his sweet time with this, playing around with the gunky lubricant, just rubbing it between his fingers like a snotball for a good 2-3 minutes. For a moment there, he seemed to have forgotten about the bike over in the stand. “I like wiping things,” he explained with a grin. With a little prompting, he got down to business, thoroughly lubricating the threads inside the bottom bracket. (As an adult watching this latexed probing, however, I couldn’t help but be reminded of the least enjoyable part of my last physical examination. Twelve-year-olds have no idea.)

Inflating: At one point, while Val and I got into a deep discussion about Italian versus English bottom brackets (which struck me as somehow analogous to the difference between English and Italian sonnets—but that’s another story), we happened to look over to a corner of the garage where a forgotten Gil was concentrating hard on attempting to inflate a latex glove with a bicycle pump. It kind of put the whole discussion in context. 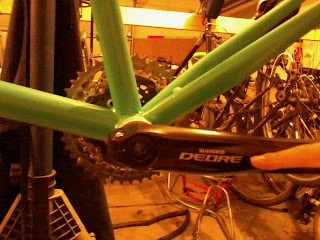 That afternoon Gil experienced one other fundamental part of learning how to build a bike. Although not exactly in the same fun category as those activities mentioned above, Re-Doing is a rite of passage, it seems. The spacers that come with the crank were the culprits here. Val had explained that these need to be put on the cranks before screwing them into the brackets, two on the chain side and one on the other, but Gil forgot (I admit I did too) and so had to unscrew and re-do this step three times before he got it right. It was a good lesson, and a kind of initiation into building anything.

Gil groaned each time but quickly forgot the inconvenience. I knew he really didn’t care. He was just getting to play with tools even more.
Posted by Jasper Gates at 9:01 PM