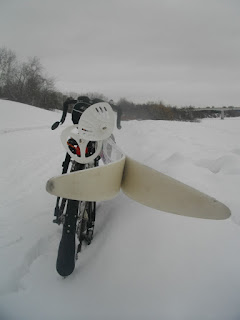 You can spend a lot of money on expensive gear for these pursuits, but in both cases, anyone, regardless of skill and with even the crappiest gear, can still enjoy the essential experience. I’ve routinely seen the same idiot grins on the faces of cyclists and skiers alike, of all ages and abilities, ecstatic just to be out breezing through the world.

And that’s not all they have in common. Both sports, in their elite forms anyway, are not exactly mainstream fare in North America and are more often associated with a vaguely European origin. Plus, you can wear the same dorkishly tight-fitting clothing for both activities, regardless of age (heck, even irregardless of age!), without fear of being mocked (at least not by other cyclists/skiers). 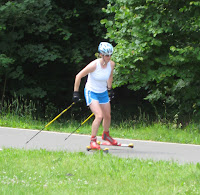 If you’re super-committed to these activities, you can even find ways to do them all year round. Witness this gal here on his roller skis, schussing through the river valley in July. Or these dudes fat-biking it around Edmonton in shivery January. In both cases, passion for the sport can take extreme forms. Just as the pedalling world suffers its Rapha-wearing, stone-faced Über-Serious Cyclists, so too does the Nordic community have to tolerate the (usually) skate-skiing, sun-glass-wearing Über-Serious Skiers, who race around the Nordic centre like they're part of Team Finlandia. 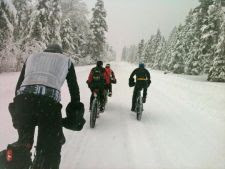 For me, while I do love both of these activities, I must confess to being a not-even-semi-serious skier. Even though I’ve recently discovered the possibilities of year-round cycling, I can’t quite imagine strapping on the rollers, to head out for mid-summer “ski.” Still, I do get a similar rush from the two activities—the physical exertion translated directly into velocity, the sense of flow, of near flight, a kind of repetitive-motion-induced zen state. 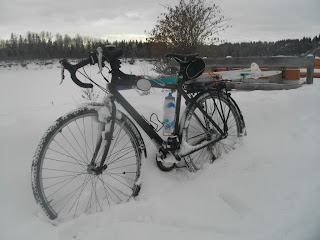 So why the heck wouldn’t I combine these two favorite activities into a crossover outing in Edmonton’s river valley? A little duct tape and some bungee cords, and voilà! I’ve got the skis and poles affixed to my bike frame. I’m now sporting a doozy of a tail, poking out a good 3 feet behind my back wheel. Should I attach a red rag, as I would to a 2-X-4 stud hanging out the back of my car?

Of course, the kayak-like back end alters the bike’s sense of balance; and the skis and poles do rattle a bit as I roll over the bumpy trail. But it’s surprisingly easy to forget that I’ve got this gear stuck on my bike. The few pedestrians I pass don’t even seem to notice there’s anything unusual about my ride.

At the golf course, I lean the skicycle against a fence and make the effortless switch-over, like some polar amphibian. I’m already warm from the bike ride, sweaty-hot from the get go, but there’s a more noticeable headwind now, which compensates a bit. Within a few strides, however, I know this: my wax is not right. Bummer. Slipping, slapping skis; I’m missing that clean stick and glide. There’s no obvious cycling equivalent for this frustration—but imagine, say, trying to pedal in cycling shoes with the wrong clips for the pedals, feeling like your feet could fly off the pedal surface with every revolution.

I shorten my stride, step down harder on the stick, dial back the extension on the glide—and there it is, the easy rhythm I’m looking for. It does kind of feel like spinning at that magic cadence.

I look up at the empty golf course, and I’m pretty sure I’m grinning. 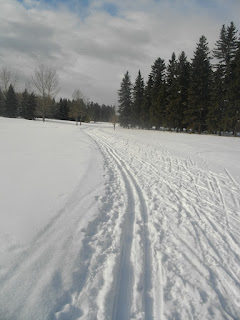