When Gil and I decided to stud our own bike tires a while back, we set out for supplies (a box of 5/8”metal screws) to the most aptly named store I could think of: Canadian Tire. Those of you who live outside the Great White North may not be familiar with this nationwide retail chain. It’s long been as much a part of Canadian culture as Tim Hortons and maple syrup. For generations, at least prior to the big box revolution, Canadian Tire was the place Canadians went to for just about any cheap-to-mid-range thing you might need, from automotive supplies to garden tools to hardware to kitchenware to sporting goods and electronics.


Like many Canadians my age, I have fond memories of the place. As a teenager, I would ride my CCM 5-speed to Canadian Tire about once a week to spend my allowance, mainly on fishing tackle (Trilene, Mepp’s Black Fury’s, Red Devils) and blank audio cassette tapes (Memorex, anyone?), and to gawk at weird broomball shoes and displays of knives (under glass) and guns (locked in a rack—this is Canada) kept behind the counter in the hunting section. 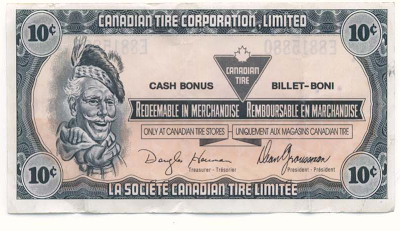 But the absolute best part about Canadian Tire—ask anyone my vintage—was (and perhaps still is) Canadian Tire money. That’s right, the store has its own currency. CT money is part of one of the original customer reward programs, created long before anyone had conceived of an Air Mile. When you pay with cash (or, these days, debit), you get back a handful of Canadian Tire money (between 1-3% worth of your purchase), in the form of money-like bills, in denominations from 5 cents to $2. These can, in turn, be used against any subsequent purchase at any Canadian Tire. As a kid, I loved this fake money— it felt, looked, smelled surprisingly like the real thing, and urban myths abound of Canadian-Tire-money pranks and scams, usually involving some gullible American retailer in a border state, who accepted the stuff as legal tender.

Part of what makes these bills sort of credible-looking is the smiling visage of “Sandy McTire,” or, as most Canadians know him, “the Canadian-Tire-money guy.” (Not to be confused with the Canadian Tire-commercial guy, a doofusy, incredibly annoying character who appeared in a series of Canadian Tire commercials in the early 2000s.) Sandy McTire, as you can see, is a Scottish-looking fellow sporting a tam (jauntily askew), a scarf, a handlebar moustache, and devil-may-care grin—a weird cross between Robbie Burns and Colonel Sanders, with a dash of Alfred, from the original Batman tv series. What exactly Sandy McTire is meant to represent is anyone’s guess. Perhaps a thrifty, mischievous Scotsman, delighted by the thought of so many bargains?  In any event, that face has become a part of Canadiana. Comedian Ron James once famously persuaded some Americans that the CT money guy was actually the King of Canada.

Now, the more I look at King Sandy on those bills, the more he reminds me of those tweeded, sporty gentlemen often seen in old cycling photos—the dignified club man, dressed for the elements, with pipe and pouch in pocket, the kind of gentle old-school cyclist we’re fond of here at the Dusty Musette. No way he’d let a little cold and snow stop him from running his highwheeler to the Anchor Inn for a milk and soda at the weekend. In fact, I take that scarf as a sign that Sandy would most definitely approve of our desire to ride through the winter. And, being a frugal, self-sufficient, hardy Scot, he’d also endorse—with a wink, I think—our stingy, do-it-yourself approach to tire studding.

Alas Canadian Tire no longer holds the prominent place in the Canadian retail scene that it once did. These days Canadians tend to get their fishing lures and broomball shoes at Wal-Mart, like the rest of the world. Indeed, there may well come a day when Canadian Tire currency needs a bailout from the German government. Still, for now, Gil and I were happy as haggis to fork over a few loonies in exchange for a box of screws and a brand-new-looking 10 cent bill. With our toques at a sly angle, we returned home to fashion our very own Canadian tires.
Posted by Jasper Gates at 3:01 PM