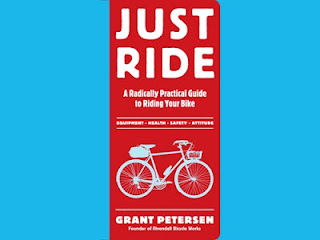 Grant Petersen is on a mission. The author of Just Ride: A Radically Practical Guide to Riding Your Bike, and chief dude behind Rivendell Bike Works, explains in the introduction of his provocative book that he is out to draw attention to what he sees as “bike racing’s bad influence” on cycling and “undo it.” In 89 short bloggish chapters, Petersen makes the compelling argument that many “serious” cyclists are living a fantasy in which they uncritically adopt the training strategies, equipment, and accessories of professional bike racers for no good reason other than “it’s what the pros do.”  Petersen points out that such a line of thinking is not only illogical, but it also leaves most cyclists uncomfortable, pretentiously dressed, and with needlessly lighter wallets.


Petersen calls his “more liveable alternative” approach to cycling “Unracing.” That’s when you forget about what the pros are riding/eating/wearing and just ride what makes sense for you, not them.  When you embrace “Unracing,” according to Petersen, “You give up posturing and quit the pecking order. You enjoy bikes again, the way you did as a kid, before you got serious.”
Lots of what Petersen has to say is refreshing, bang on the mark, and occasionally deliciously audacious: for instance, his defence of short bike rides, his observation that you really only need eight gears, his shots at expensive “racing-style clothing,” his critique of clipless pedals, his argument for riding wider tires, his assertion that most bikes don’t fit, his elegant paen to sub-24-hour overnights, his scathing treatment of Critical Mass, and especially his sweeping claim that, when it comes to cycling, “racing ruins the breed.”

One of the most provocative chapters is called “Riding is lousy all-around exercise.” Petersen argues that some cyclists just ride their bikes too much, and though they think they’re getting in great shape putting in mega-miles, really they’re just getting big legs—while the rest of their body isn’t doing much at all. These riders, Petersen says, would be better off riding less and diversifying their exercise regimen. Interesting thing for a bike manufacturer to argue. He then goes even further to suggest that following the standard training and eating habits of many “serious” cyclists are more likely to make you fat than fit.

Petersen, as you can probably tell, is a classic crusty contrarian. He’s worked in the cycling industry for a long time and clearly seen more than his share of cockamamie bike-industry hype infect the regular rider’s approach to cycling. Understandably, this could make a fellow ticked off. But Petersen so badly wants to shock some readers that he makes a few claims that some will find preposterous. The helmet chapters are sure to make some heads shake; his description of cycling gloves as a waste of money kind of bugged me; and I have my doubts about the wonders of the cycling poncho. Sometimes it feels like he’s just saying shit that he can’t possibly believe but knows will get a rise out of people.

The best parts of the book for me were the ones directly related to Petersen’s larger thesis about the bad influence of racing. This is something that some have been lamenting for years but is not often picked up in the mainstream press. At one point, he asks us to imagine a different world of bike racing, where bikes had to be made not just to be fast, but to last—and the much more positive trickle-down effects this would have on the bikes the rest of see in bike shops.

But there are several chapters in the book that seem to have little to do with this thesis. These chapters could go under headings like “Cool Technical Things I Know (or Have Invented) About Bikes” (frame arithmetic, what the C means in 700C, Q-Factor). What these chapters have to do with the Unracing thesis isn’t clear to me, though I did find some of this interesting, in a random bike–trivia way. By the end, I found myself wondering if there aren’t actually two books curiously melded together here: the Unracing one and the cool bikey trivia one.

The other curious thing is that Just Ride as a “velosophy” (his term) would seem to imply embracing a certain simplicity, a stripping away of the crapola-sheen of the bike-racing industry to get at the true and basic act of bike riding (remember the kids?). But that’s not necessarily the case for Petersen. Instead, he seems to offer a kind of alternative aesthetic, an Unracing anti-chic (twine on the handlebars, beausage, ponchos—incidentally, all of it captured perfectly by Rivendell), which some readers may find just a different kind of pretentious than the one Petersen criticizes.

Overall, though, I’d recommend the book. It’s easy to open up to any chapter and just read. And it’s the kind of book that’s bound to provoke you in one way or another—love it or hate it. So far it’s getting some impressive buzz, from the jacket blurb by BikeSnobNYC to the more even-handed endorsement of blogger Joe Cruz.

Will this book actually convert anyone to the Unracing fold? I don’t know. I doubt Über-Serious Cyclists will even pick it up. It worked for me because so much of Petersen’s “velosophy” jives with my own semi-serious cycling ethos. I think there are lots of semi-serious cyclists out there for whom this book could be an eye-opener. And that’s got to be good thing. For the unexamined cycling life is hardly worth living.