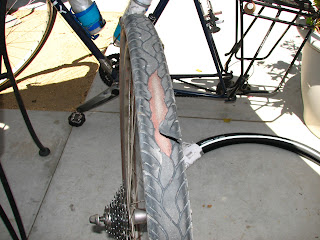 First, the unfortunate outcome of my equipment selection: I bought two brand new Specialized Armadillo tires for the tour and finished the ride on a Bell and a Michelin. So that was $110 down the drain.

These tires weren't my first pick for the work of a trans-national tour, but they were what the local shops had  and were from a family of tires I'd had good luck with in the past. Que sera sera, I suppose.

The front tire bit the dust fairly early in the tour--only a few hundred miles across the border into the United States.  Something cut the sidewall of the tire, a form of damage that you can't repair or work around. Replacing the tire was a necessity, and because the tire was on the front wheel, it became a priority. The whole affair was so aggravating that I have no dramatic photos of the damage--we were in a smallish town, riding from out-of-business bike shop to out-of-business bike shop and finding no love for my wheel.  The shops in town that were open sold only whole bicycles or bmx tires, neither of which did me a lick of good.

But I had done a little homework over the course of the year prior to this trip, and one of the things I knew was that Walmart almost always had some 700c tires in stock. Beautiful tires? No. Good tires? Maybe, maybe not.  But probably tires. So rather than getting too bent out of shape, we set our sites on the local Wallyworld and entered their aisles, wallet in hand. And they had what I wanted: 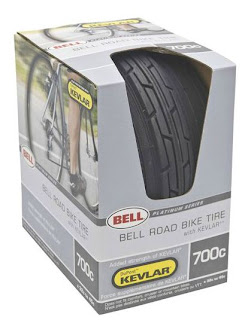 Though there was also something a little surprising about it: 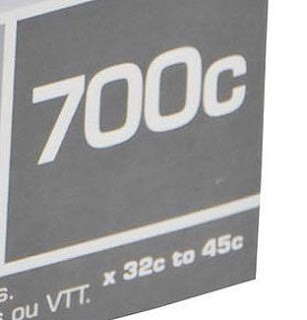 Those of you who know anything about bicycles certainly know that tires do not generally come in a range of sizes. Or, of course, any given model of tire does indeed come in a range of sizes, but never in a single given tire. Beggars not being choosers, and my condition being barely ahead of that of a beggar, I put down my $20 and got on with it.

The tire, happily, was not a Bell, but an Innova, and was not made of elastic, but standard rubber in perfectly useful 700x35c size. So away I went with mismatched sneakers on my vehicle, but going ever more away. Nevertheless, perhaps the scariest thing I have done on a bicycle in recent memory is to voluntarily descend a hill at 35+ mph on a twenty-dollar Wal-Mart tire. By the time we hit the mountains of California and I was diving down the backsides at 40+ I had become used to the activity, but I never really crossed over into being happy about it.

The back tire, though, provided that dramatic photo up top. It began scattering itself to the world somewhere in a shitty neighborhood south of Los Angeles.  All of the tread started separating from the casing and the collapse of my tire seemed imminent.
However, we were, again, nowhere near a bike shop, and, considering the shady nature of the hood we were traversing, I elected to just ride quickly and avoid gravel in the road. Long Beach, an hour or two down the road, provided a convenient shop staffed by a surly crew of hipsters and a fine Michelin tire for my rear wheel. The cafe next door provided tables and lattes to support the changeover.  You can see from the photo above that the weather was perfectly cooperative.

You might also note that I didn't buy a matching tire for the front. By this point, the dual failure of my brand-name tires had led me to see if a $20 magic-sized bit of rubber from a discount store could withstand, essentially, the entire trip down the Pacific Coast and the apparent wrath of the bike gods for my blog post on proper equipment.

The answer, and why I stand by every word of that orginal post, next week. . .