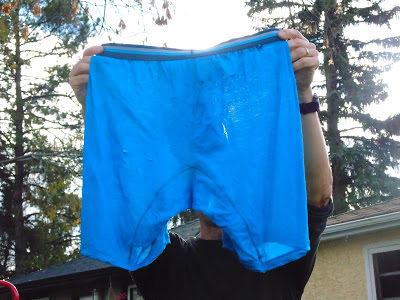 These are the tattered remains of my MEC Merino T1 wool boxers ($42). They look like they’ve been chewed on by moths for decades and chafed up by thousands of miles of activity. But, in reality, they are only a few months old. I bought them as part of an experiment in cycling attire. This past summer, I decided to give up conventional lycra cycling shorts in favor of wool boxers and regular shorts-shorts.

Grant Peterson recommends this approach in his book Just Ride, as part of his philosophy which says forget about all the expensive and overly serious-looking accoutrements of cycling and just get on your bike and go. He claims that a simple pair of wool undershorts is all you need to be comfortable in the saddle all day long. (I should mention that Petersen actually sells such shorts on his Rivendell website.)

So, back in the spring, shortly after I started using a Brooks saddle for the first time, I thought I’d give the woolly package a try. I had found the interface between lycra and leather to be awkward, and I’d read that touring cyclists often employ the Brooks-woolly combination to good effect. My plan was simple: whenever I rode my gravel/touring bike with the Brooks, I’d freeball it in the merino boxers. On my fast bike, though, I’d still wear lycra.

From the get-go, the woolly willy felt pretty great, once I got accustomed to the slackness of the whole arrangement. It is quite a transition, from snuggly-packed lycra to the laissez faire looseness of boxers. But I quickly came to appreciate the benefits of airflow and the ability to reposition my business hands-free, by simply sitting up and then back down.

And, of course, wool has other, well-known benefits. Somehow, it doesn’t hold odor like other fabrics, and even on a 10-day gravel tour (where I did laundry only twice), I didn’t feel grossed out by my pants at the end of each day (or the beginning of the next). Plus you can comfortably wear the same kit before, during, and after your ride. Try that with lycra. 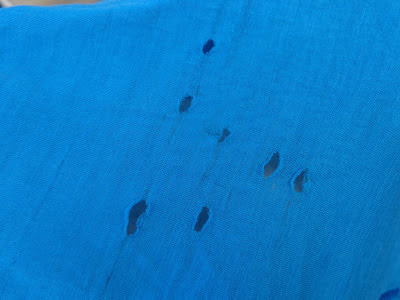 But after only a few weeks of employing my new lower-half ensemble, I began to notice trouble between my legs. A small hole appeared in the wool in early July; then another, and another. Next came streaks in the fabric, like the runs you see in nylons.  I continued wearing my Swiss-cheese shorts--they felt fine--but after each ride, they looked a little more shredded, further ravaged by some flesh-eating disease.

Those shorts are now toast. But I'm a commando convert, a true freeballing cyclist. I think of at as a semiserious-cycling Lifestyle. I'll buy a new, better pair of wool shorts, maybe some fancy Rivendell ones, and keep on 'ballin.

Petersen's advice to cyclists is "Don't overthink your underwear." But the truth is that few semi-serious cyclists consider underwear at all.  I'd modify that to, simply, "think underwear." Just not these ones. 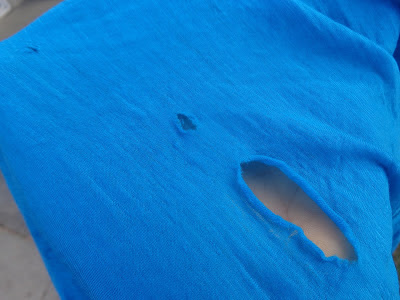