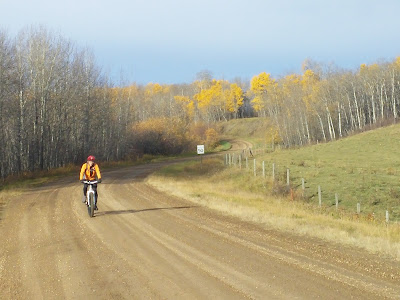 Val and I had took a flyer out to Miquelon Lake Provincial Park with our fat bikes on the Thanksgiving Monday with two reconnaissance objectives in mind: One, we wanted to scope out the 20-km of cross-country ski trails there, which are open year-round to cyclists (one of the few skiing facilities in the Edmonton area that doesn’t expressly forbid fat bikes in the winter). And two, we were keen to check out the network of crooked gravel roads that run through and around the park. Plus Miquelon is less than an hour’s drive south-east of Edmonton and I hadn’t been there in 20 years. A visit was long overdue.


I’d forgotten just how big and well-equipped the campground is at Miquelon--oodles of campsites, group areas, even a few glamping units. Part of the campground is actually open year-round, and we saw a surprising number of people camped out in their recreational vehicles despite the chilly weather. Who camps in October in Alberta? Were these folks snowbirds holding out as long as possible before embarking on the great migration south? 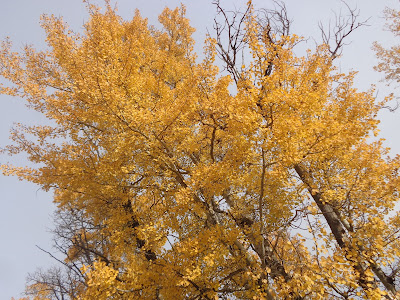 Speaking of migration, Miquelon is, it turns out, quite literally, for the birds. The area is wetland central and thus a haven for waterfowl, from your mallards, to your buffleheads, to your lesser scaups. In fact, Miquelon has been designated a provincial Important Bird Area (IBA), and apparently birders flock there to catch a glimpse of yellow warblers and red-necked phalaropes.

Even the names of the nordic trails reflect the feathery theme. The Grouse Loop and Chickadee circuit are pretty much what you’d expect—narrow double-track of mostly rolling, punchy ups and dippy downs through aspen forest.  It wouldn’t be easy rolling on a fat bike in the snow, and depending on how it’s track-groomed, it could be a tight fit for cyclists and skiiers sharing the trail. But I think these trails are worth a winter visit. 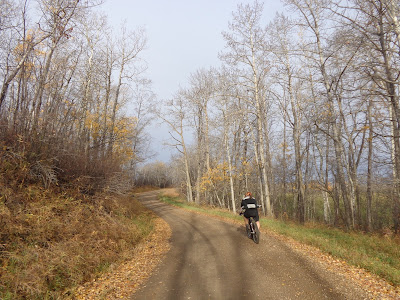 The real surprise of Miquelon, though, was the gravel.  As I was planning our flight path, my eye was drawn to the squiggly roads on the park map. From these, we pieced together a 30-km circuit of lovely gravel roads, with a little trail bushwhacking mixed in, just for fun. Almost all of this route was along twisty, narrow gravel roads, either through boreal forest or open farmland.

My favorite road, however, was a lightly used grassy roadway or a kind of "green track," as the English would have called it a hundred years ago, along the top of the park. Technically, this was probably (once) an access road to the park, but it was now blocked off by a gate (hence our bushwhacking detour). As a result, this “road” hadn't seen much vehicle traffic in recent years. In fact, the track was mostly grass covered and felt like a super-wide trail. Riding this on a fat bike was far more fun than huffing and puffing our way around the Chickadee Loop--the scale of the twists and hills was more gradual, better suited to two-wheel travel. Our "green track" only lasted a few kilometres before hooking up with a regular gravel lane, but it was long enough to provide a small thrill. 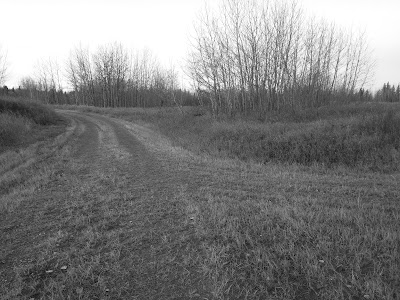 As a result of our reconnaissance, I’ve decided to declare Miquelon an IFBA—Important Fat Bike Area.  We’ll return some day, and perhaps surprise some avid birders on the prowl for phalaropes in the bulrushes. It could be their lucky day. A couple of coots on fat bikes? Check that off the life list.