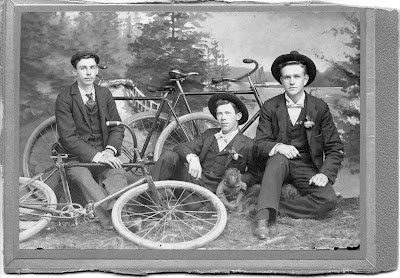 Roads were hard and smooth, with the exception of one two mile stretch of soft gravel. Conditions were fair to good all the way, with favorable winds on the homestretch. No other wheelmen were encountered on the road. The only hardship of the ride occurred when Dr. P.C. Reveaux made a small header on a slippery rail crossing and was thrown violently to the ground, bruising his hand and bending his brake lever. The good doctor mounted again and rode on without further incident. It was a splendid run.

The next day, all three wheelmen declared themselves ready for more wheeling, though Reveaux said he couldn’t move his hand and Garou and Gates reported that their asses were sore. Bernard was feeling the ill effects of too many Oreo cookies.
Posted by Jasper Gates at 12:46 PM