The date has been circled on the calendar for weeks. The route has been carefully, no, meticulously, selected. The chains have been lubed, the tires pumped. The mystery cache is prepared. The legs are as ready as they’re gonna get. The buttocks are primed. Today, we ride a century.


I ride lots, sure, but I have never ridden a true century—that is, 100 miles in a day (technically, in 12 hours, though we’re going to shoot for 10). A metric century, as in 100 km? Sure, many a time. But as is often the case, the metric system has a way of exaggerating accomplishments. 60 miles? Doesn’t sound nearly as impressive as 100 km. 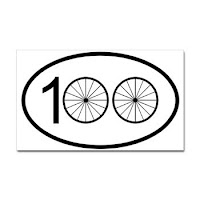 Riding a true century is cycling’s equivalent of running a marathon. It’s a benchmark accomplishment in endurance sport. Any reasonably fit runner could probably pull off a half marathon with little training. But a full marathon requires preparation, both physical and mental. Cycling a century is similar. The metric can be taken on by most cyclists who ride regularly. But the 100 miler is a more daunting propsect, not to be attempted on a whim.

I know what you’re thinking. Isn’t the idea of riding 100 miles anathema to the sacred Code of Semi-Serious Cycling? Isn’t the century, well, a bit much for an SSC? I used to think so. Until last summer, the very thought of attempting The Big C hadn’t even entered my mind. Then Val, who is a true centurion many times over, asked, half-jokingly, when we were going to ride one. Initially, I scoffed, but somehow the idea got into my head.

While spinning away in Val’s garage over the long winter here, we would talk about our wish lists of rides for the upcoming season. They ranged from old chestnuts (3 days on the Golden Triangle) to overnights (Pigeon Lake) to ambitious road trips (Utah Cliffs) to cockamamie schemes (Golf and Gravel Tour of Saskatchewan), pipe dreams (Tour Divide) and everything in between. Near the top of my personal list for this year was the 100 miler.

One of the things I find appealing about a true century is the tradition behind it. Ever since the earliest days of cycling, wheelmen have pushed themselves to achieve certain milestones, usually associated with specific distances. The number 100 has an obvious magic about it, and the idea of trying to cover 100 miles in a day captured the imagination of the earliest cyclists, even the semi-serious ones. In the 1880s and 90s, in places like London, Toronto, Boston and Philadelphia, cycling clubs routinely organized weekend century rides. (Though back then the time limit was 24 hours, and some riders, such as Karl Kron, the eccentric American cyclist/journalist of the 1880s, describes one century ride from noon one day until noon the next, with an overnight in between.)  In fact, a cyclist completing a “century run” was cause for notice in local cycling periodicals, the way a hole in one might make the pages of a small town newspaper today. It was a noteworthy event.

Century rides today tend to be organized events, where a cycling club or organization hosts the ride, offering some support (route marking, snacks and water at rest stops, assistance with mechanical problems) in return for a registration fee. From what I’ve heard from Val, and in my limited experience in the United States, these kinds of weekend century rides are common there. Here in Edmonton such events are rare; I can think of only one in the Edmonton area, the Tour d’Alberta, held every July. (Penn and I did the metric century version of this event a few years ago. It was sort of fun to be part of a large group, and the tortiere served up by the church ladies of Legal, Alberta, was pretty yummy. But the registration fee was steep and the route nothing special.) Not sure why we don’t have more of this kind of thing in Alberta. I guess the century ride is not a big part of the cycling culture here. Maybe it never was.

In any event, we three musetteers decided to hold our own century, where we could pick our own route, go according to our own timetable, arrange our own support—without a fee. I doubt that Val’s mystery cache will include any tortiere, though you never know—there must be some Quebecois way back in the Garou line. 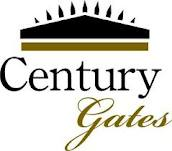 We’ll report back next week on how the ride went. When my legs are tightening up later this afternoon, maybe I can will myself to keep going by imagining the headline in the paper.
Posted by Jasper Gates at 5:40 AM