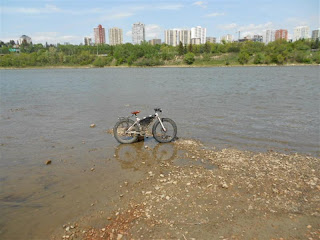 For Penn and I, those places often begin with some very familiar terrain.  The fatbike draws stares everywhere I go.  Joggers will spin around as they go by, other bikers drift into my lane, and (if it's parked) pedestrians pull out their cell phones and snap pictures.  But the bike isn't really that exotic a rig, and the trails I pedal it along are the same trails used by regular mountain bikes.  Fatbike has become the prefered nomenclature, because snowbike or sandbike are just too limiting in their specificity.


We can go urban, too.  The fat tires provide a jolly roll over the pavement just as readily as they do the dirt.  The wheels make one hell of a hum on blacktop, to be sure, but it feels infinitely less ridiculous than sticking to the pave on a bike with 140mm of suspension travel.  Hitting the road doesn't give us the slightest bit of pause, and it makes tracking down a good latte or a dark corner of the city's infrastructure no problem at all.

The fatbike's real charm, though, arrives when you stumble across something less familiar.  Something, for example, like a stretch of sugar-fine beach sand in the middle of a big city on the Alberta prairies.  It's the kind of thing that you would blow past on a regular bike--even actively avoid--but becomes something of a beacon when seen from the saddle of a Pugsley.  You see deep, soft sand and the first thing you think is "let's make some tracks."


At this moment, you really appreciate the appeal of the fatbike.  It's not so much that you can float across some soft sand or find a decent grip on the slimy rocks of a river bottom, though you can certainly do both with relative ease.  It's that the bike wants you to do it.  The bike knows what lurks in your mud-loving heart and it wants you to indulge every absurd urge. 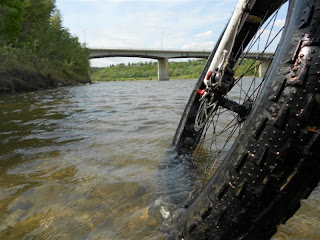 This is a moment where the real simplicity of the bike makes itself known, too.  There's no need to worry about the bushings or the bearings in your multi-link rear suspension.  Nor to concern yourself with the state of the seals holding all of the oil and/or air into your $800 Fox forks.  Nor, even, to think about the precise state of your finely calibrated 10-speed chain and cassette.  It's likely that your fatbike doesn't have any of that hooey, so you splash happily on.  The fatbike makes it possible to see things you wouldn't otherwise get to see from a bike saddle.  Things like the inside of a river.

But even on the playful and indulgent fatbike, Penn likes to keep things moving, so I have to set meditation aside and pedal to keep up. 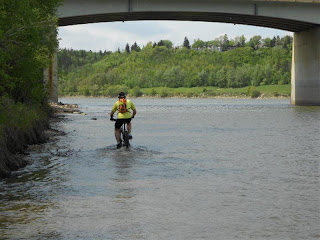 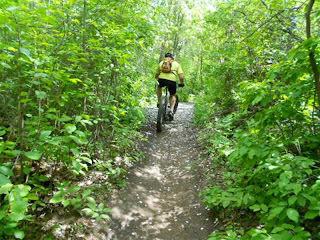 Through a forest carpeted with floral petals: 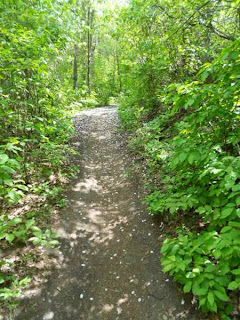 And, eventually, back to the urban environs from whence we came: 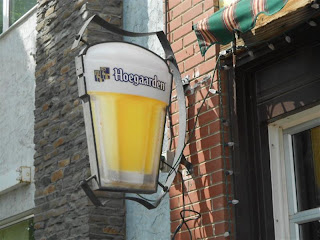 The start and the end of this ride look look very much like the start and the end of almost any of rides.  What the fatbike gives you, then, is that middle part.  It's just enough of a change to make you look at the whole thing--familiar bookends and all--quite differently.  It's just enough, really, to make you start trying to figure out a way to make that middle part into the entirety of the ride.  But that's not quite right.  No, what it gets me thinking about is what might happen that middle part were to form the routine bookends of a ride.  What then would the exotic middle of that journey look like?