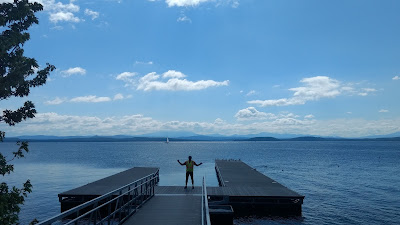 The Island Line Trail, a popular 14-mile cycling path which runs from Burlington, Vermont, to South Hero Island, Vermont, is missing something—200 feet, to be exact.


The prettiest section of the trail, a 3-mile packed-gravel causeway (a former railroad bed) that links the state capital on the mainland and South Hero Island in Lake Champlain, is broken up by a gap for boats to pass through. A small ferry takes bicycles and pedestrians across the 200 watery feet.

The trail was packed with bikes the day we took the ferry, hundreds, maybe thousands, of folks out for a holiday-Monday spin on a hot summer day. It was impressive. But you can see the appeal. Lake Champlain is gorgeous and the views along the causeway are stunning on a clear day: the Adirondack Mountains of New York to the distant west and the Green Mountains of Vermont to the east. 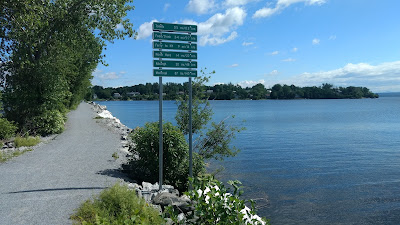 There were so many cyclists on the trail that day that the ferry “terminals” had line ups of cyclists. The crossing takes all of 5 minutes, barely enough time to pay your $5 and take a selfie. The ferry is operated by a pleasant hippyish couple (Bernie Sanders boosters, I’m guessing) who spend more time loading and unloading bicycles than actually ferrying. 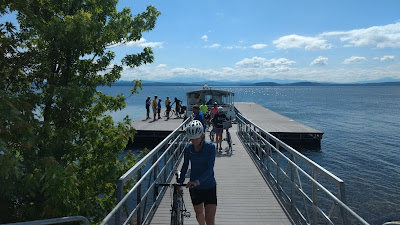 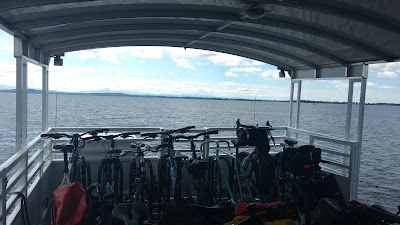 After disembarking, we stopped for a snack and fell into conversation with an octogenarian couple from Burlington out for a day ride. They noticed our loaded up rigs and began asking questions about our trip, then very specific questions about our bikes and routes. (“Which bridge did you take over the river in Montreal? Ah, the Cartier, of course!”) The husband, a retired academic originally from Belgium, got that twinkle in his eye, reminiscing about bike trips he’d done in earlier days, and wondering—not out loud, but you could see it in his eyes—if he’s got one more unlikely adventure in his eighty-something-year-old legs.