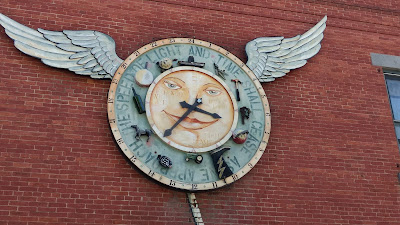 Quarter past a boot. Tractor o’clock. Ten to the hammer.


I can’t help it. The huge clock on the exterior wall of the Old Brick Store in Charlotte, VT, invites such cornball jokes. And the grand old building invites visitors to step inside, and into a charming mixture of past and present. 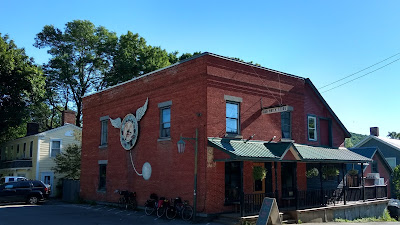 The day we stopped in, it was hot as an oven in the sun but cool as a Creamsicle in the terrific little café, deli, and specialized general store (if such a term makes any sense). The coffee, breakfast burrito, and breakfast sandwich were all winners but the true champions were the exquisite baked goods, from pain au chocolat to muffins to croissants. Val wisely filled his pannier with these gourmet goodies, and I was destined to be jealous of his flakey stash when, hours of heat later, out of desperation, I made the fateful mistake of purchasing a gas-station donut (!). The horror.

I imagine, at one time, the Old Brick was a true general store, offering a little of everything from hardware to dairy, but now it’s got more of a boutique feel, featuring a small selection of high-end speciality items and local fare, organic ice creams and fancy bees’ waxes. 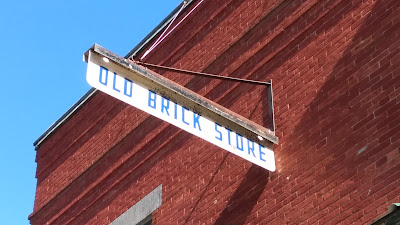 The best feature of the place, though, is its other-century vibe—slightly crooked hardwood floors, rich brick walls, and cool, cool air, that comes not from an AC unit but courtesy of thick, old, well-constructed walls. Business was steady the morning we dropped by, but the mood inside remained mellow, regardless of how many croissants or candles were flying off the shelves.

The Old Brick Store is a gem, a shady respite from the heat and our kooky century, worth looking up if you’ve got the time—say, a three-quarters of a turtle or half a toy submarine. 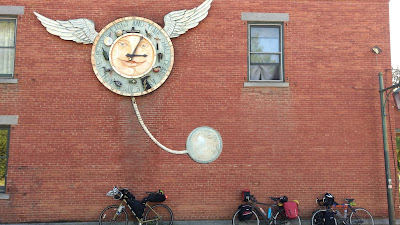