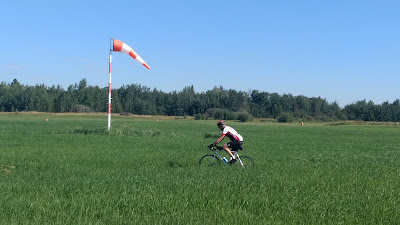 Strava Jeff, inspired by a Velocity Cycling Club ride he'd heard about, came up with the idea of a day-long, all-asphalt ride around the edges of the Edmonton, visiting as many small airports as possible. He pitched it as a kind of Airports Gran Fondo, with a randonee component, where we'd take pics of ourselves and/or our bikes at each of the airports en route.

But seeing as how it was just him and me doing the thing, the "Gran Fondo" name seemed a bit of a reach. So we re-branded, as they say, and called this ride the Airports Century: 100 miles and 5 small airports to the north, east, and south of the city. By the time we finished, however, we'd come up with yet another name for this endeavor: the Windsock 100. 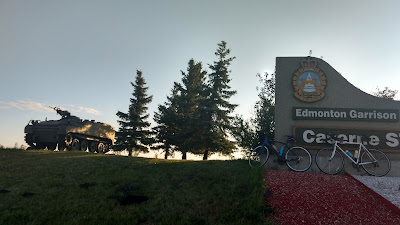 1. Our first airport was the Canadian Forces Base, a straight shot north of the city. The airstrip is hard to see from the fenced edges of the garrison, so we settled for a photo of this tank because hey, it's a tank. 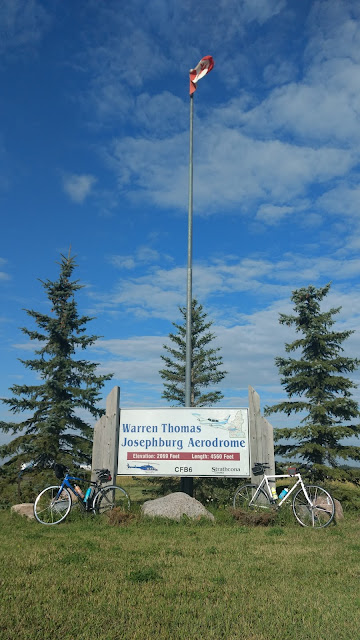 2. From there it was a wind-aided blast east to the Josephburg Aerodrome, just east of Fort Saskatchewan. The old wind sock here, like the flag, was full, pointing straight east, promising a grind on our way back to the city. 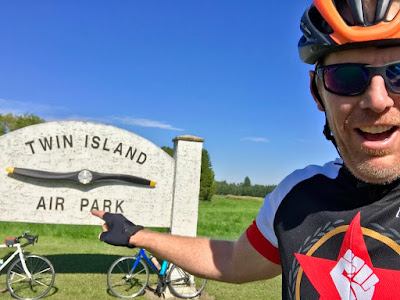 3. Then south to Twin Island Air Park, a tiny, grassy airstrip south of Sherwood Park. Although the landing area is small, the windsock is huge, the biggest we saw that day, a classic attempt at compensating for an undersized runway? 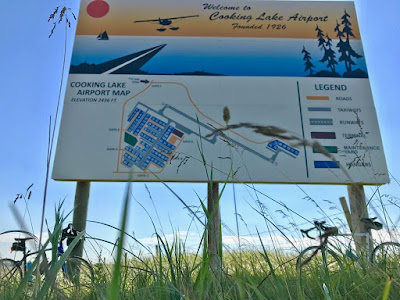 4. Cooking Lake Airport, which, strangely, is only a few miles south of Twin Island (is this the capital's Airport District?), is surprisingly expansive--and old. The website claims that this is the oldest public airport in Canada and that it was used by famous bush pilots like Punch Dickens and Wop May. The day we stopped by, it was quiet there. We gathered up what energy we had left and headed back into the wind.

5. The final "airport" on our circuit was the Capital City Flyers' Model Airplane Flying Field south of the city, near Rabbit Hill, a longtime favorite spot of mine. The facility is so tidy, so obviously well cared for, so wonderfully nerdy. It's status as an airport may be a stretch to some, but it's got the essential item to qualify for our ride, at the top of that striped pole. 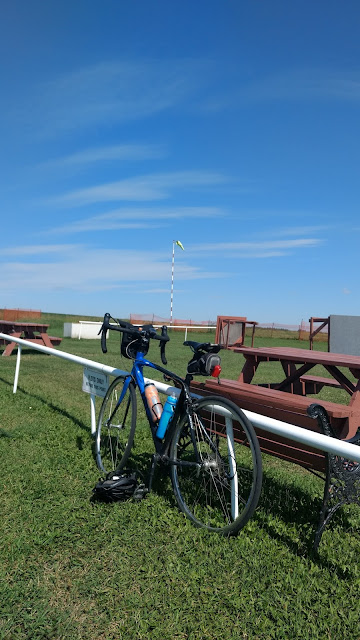