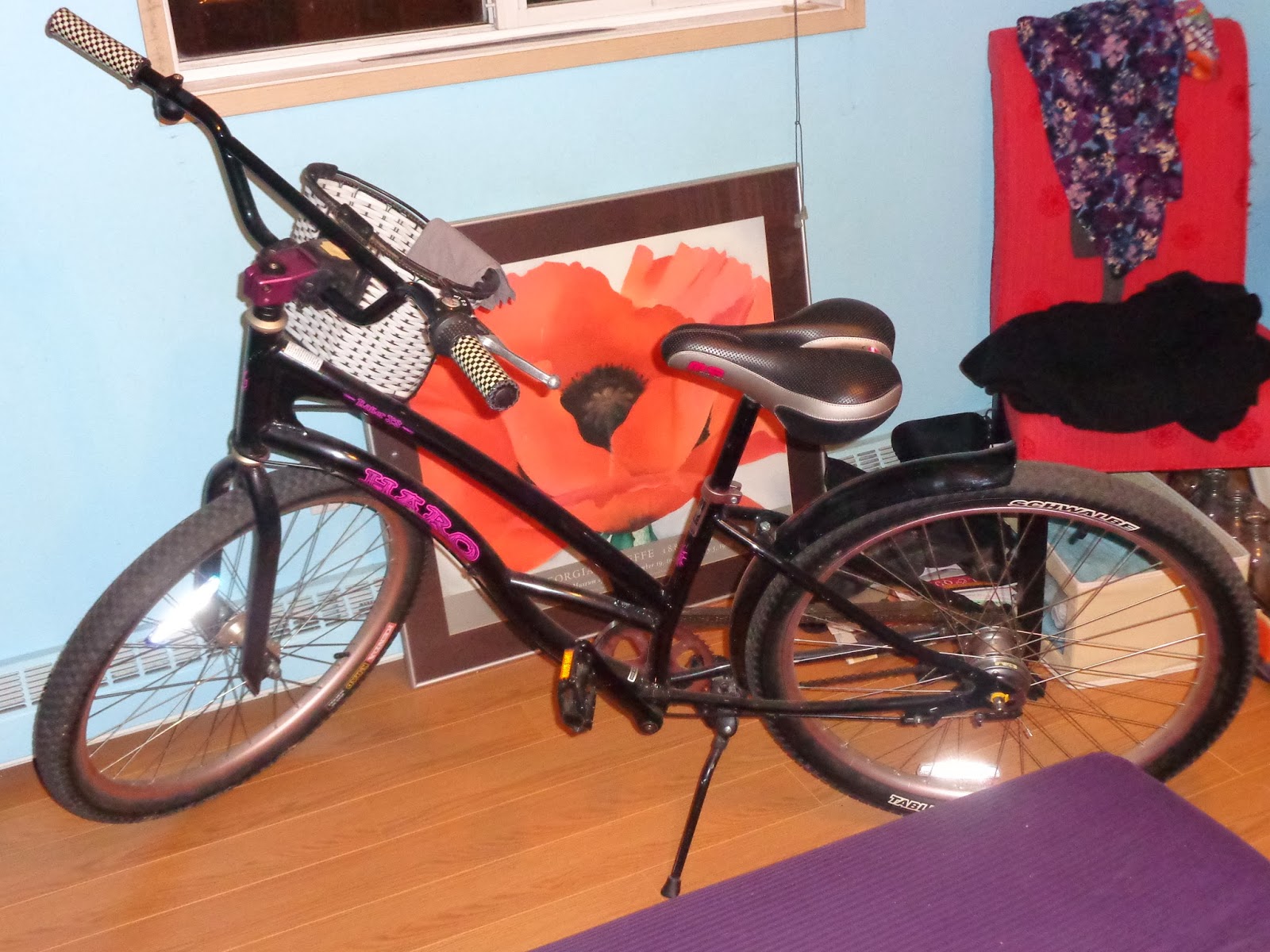 This is Prunella. She’s a Haro sidewalk cruiser, and she belonged to my friend Karen, who died a couple of weeks ago, and whose funeral I will attend this afternoon. Karen, a writer and editor, was 56 and died of a rare, incurable neurological disease. She was one of my favorite people to be around.

Karen wasn’t a serious or even a semi-serious cyclist. In fact, in the years I knew her, I don’t think I ever actually saw her ride her bike. But it was always proudly displayed in her apartment, and when we visited her place, Karen would sometimes say to me, knowing my fondness for cycling, that she adored her bicycle. “I love Prunella,” she’d tell me.


The fact that she named her bike was typical of Karen. She loved giving both people and inanimate objects silly names. Many of her close friends were christened with uniquely Karen-ish handles. (Alas, I didn’t know her well enough or long enough to receive one.) I don’t remember the story of Prunella’s naming, though I’m sure it has to do with the color of the frame and Karen’s curious but genuine fondness for actual prunes. (She once wrote a lovely and very funny essay-tribute to the much-maligned prune. It was so compelling it sent me out looking for some and got me eating them for a while.)

Lots of people name their bikes. But for Karen, Prunella seemed to have an actual personality; Karen admired the elegant curves, the graceful, impractical design of this sidewalk clunker—it was comfortable, classy, with a few flashy bits. I remember Karen admitting to me how terrible she felt when she was told by a bike mechanic that Prunella’s flat (and ruined) tire was the result of chronic under-inflation. It was as if Karen had been informed that she had unintentionally under-fed a malnutritioned child in her care.

One reason I so enjoyed Karen’s company was that she laughed at my jokes. She was smart, silly, literate, witty, and cosmopolitan. She spoke at least four languages fluently. Making her laugh—and she did have a most hearty guffaw—made me feel a little bit of all those things myself, if only for a few minutes.

Karen was thoroughly European, and this partly explains her soft spot for bicycles, I think. She wasn’t actually born in Europe; she hailed from a town in southwestern Ontario. But it was as if part of her heart was in Europe always. From time to time, she would set off gallivanting around Budapest or Prague or Italy. Her soul was definitely eastern European.

About six months ago, before she got sick, I thought of the perfect gift for Karen—a book called The Delights of Delicate Eating (1896) by Elizabeth Robins Pennell. Elizabeth and her husband Joseph were early cycle-travel pioneers who wrote extensively about cycling in the 1880s and 90s. Elizabeth also wrote a food column for London’s Pall Mall Gazette in the 1890s and this book is a collection of some of those pieces.

These food essays are not your usual fare. Elizabeth had no formal culinary training; she was a complete amateur. But she wrote about food with the zeal of a passionate non-expert. (The first essay is titled “The Virtue of Gluttony”; another is called “The Incomparable Onion” and contains this line: “The secret of good cooking lies in the discreet and sympathetic treatment of the onion.”) The pieces are full of what Charles Lamb would call “gusto.” It occurred to me that Karen and Elizabeth would have hit it off famously. Both loved books, wine, food, travel, Hungary, good conversation, and, not least, cycling.

But by the time I got around to bringing the book over, it was too late. Karen was already sick and her decline was so rapid, that she couldn’t read anymore. In fact, she slept for most of that visit, so I just hung out with Prunella and read some of Pennell’s book myself, kicking myself for not giving it to her much earlier.
I don’t know what will happen to Prunella. I suppose she will end up with a new owner. That person will inherit a Haro cruiser, probably ride it more than Karen did, perhaps even park it in another living room. But I doubt Prunella will ever again be cherished in the stylish way she was by my friend.