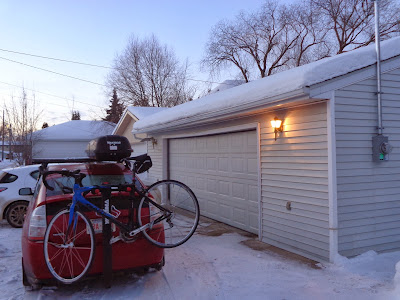 Given the sounds emanating from Val’s garage—a cacophony of thumping music, spinning rollers, whirring fans, and occasional yips and yells—passers-by might assume that a band, maybe a bunch of pimply teenagers, is jamming away in Val’s garage, perhaps with dreams of one day making the cover of Rolling Stone.

Except for the fact that it’s 7:00 am—a time that no teenager has ever played a note in any garage. In fact, we—that is Val, Penn, and I—are not a garage band but rather just three middle-aged guys spinning on their bikes in front of a blaring Spinervals video, trying to work off some winter weight and keep our legs from atrophying completely. It’s January, and garage spinning is what we do around here come January.


Val’s garage is a primo spot--dry, bright, heated and big enough that we can keep our bikes and spinners off to the side of where his car resides. In five minutes we’re set up, tv screen ready, fans in place, ready to roll. The schedule is three mornings a week for Val and Penn, usually one or two for me.

Of course, spinning is a lame substitute for actual cycling. More than just lame, really—it’s a perverse parody of real cycling. We wear cycling clothes and shoes, we sit on our actual bicycles, and we go through the motions, turning the cranks. The only thing missing is, well, movement.

Seeing things—landscapes, people, llamas—and going somewhere, moving through the world—these are the some of the greatest pleasures of cycling. (Runners, in comparison, see a fraction of the terrain; swimmers, didley squat.) Every road ride is different, even around the same route, because there are so many variables: wind, road surface, temperature, elevation. Indoor spinning can attempt to compensate for an inherent lack of variables through gear shifting, position changes, rpm and heart rate monitoring, but these are a poor man’s headwind and killer climb.

Before I became a winter cyclist, I used to think that spinning was something to partially fill the bicycle-shaped void in my winter life. Now that I ride my bike outdoors all winter, after a fashion anyway—commuting on my old Kuwahara and playing on my new fatbike—you wouldn’t think spinning would have much to offer me anymore.

And yet, somehow, it does. Yes, commuting and fatbiking count as cycling, sure, but they’re nothing like the road riding I love and miss all winter. Sitting on that road bike in Val’s garage, going nowhere fast, like a giant lycra-ed hamster on a wheel, is only an approximation of road cycling, but it does seem to enable a certain dreaminess. I stare at the same pipes on the garage wall, let my mind wander, and conjure the rides of the season ahead.


Spinning can’t even be said to provide much opportunity for camaraderie. It’s hard to visit while spinning—the spinners and fans, the music, the barking out of directions from Coach Troy on the screen—it all makes quite a racket. (We occasionally ride without the music—my preferred way.) Still despite the inertness of the endeavor, there’s something about turning the pedals beside one’s mates, spinning the legs out, gasping and burning side-by-side-by-side that faintly hints at the real rides of the distant spring.
Posted by Jasper Gates at 10:46 PM